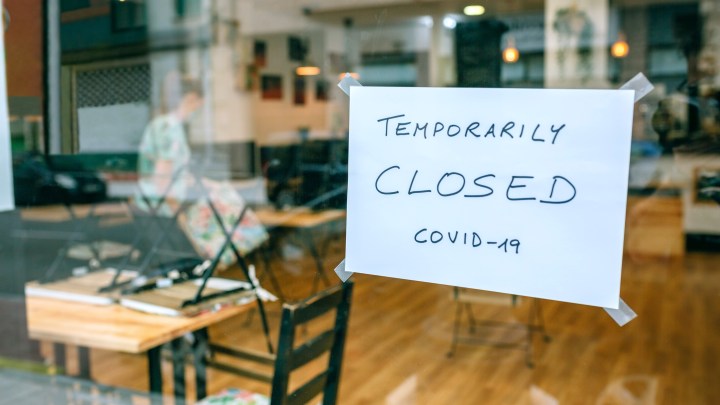 COPY
As businesses reopen, many small businesses worry they won't be able to compete to larger ones when it comes to hiring. doble-d via Getty Images

As businesses reopen, many small businesses worry they won't be able to compete to larger ones when it comes to hiring. doble-d via Getty Images
Listen Now

According to the Labor Department’s Job Openings and Labor Turnover report, or JOLTS, there were 8.1 million positions available in March, a record high for job openings. Consumer spending is also pretty strong and confidence is edging up toward pre-pandemic levels.

But, and it’s a significant but, the Small Business Optimism Index from the National Federation of Independent Business showed a very small uptick in April. Lots of agita is being felt among small-business owners who are reporting labor shortages, rising costs and more. The NFIB describes small-business owners’ expectations as “surprisingly glum.”

“They’re really very pessimistic about the future,” said NFIB chief economist Bill Dunkelberg. Dunkelberg said 44% of owners (also a record high) report they can’t hire workers to fill open positions. “They’re raising worker compensation, bonuses, too — they’ll offer you $50 to take an interview or $1,000 to show up for the job that a few days ago you agreed you would take.”

That might work, said Linda Barrington at Cornell’s Institute for Compensation Studies, even though a signing bonus is not something we’re used to seeing in lower-wage jobs.

“If it’s a lump-sum that you pay them to get in the door, you’re not locked in,” Barrington said. “It’s very hard to reduce wages once you’ve started paying someone at a certain level.”

For workers still tied to home due to childcare or health concerns, Barrington said she doubted a three- or four-figure-one-time bonus would get them back to work. But for someone who’s on the fence: “It can have a tipping point,” she said. “You don’t know that you will still get a signing bonus in three months.”

Many small businesses are likely to be outbid for scarce workers by larger competitors, according to Joe Brusuelas, chief economist at consulting firm RSM. “Mid-sized companies tend to pay the median average wage around $60,000 dollars, right? Small companies don’t do that,” he said.

The food-to-home company Tovala will be hiring a hundred new workers for its new warehouse near Salt Lake City in the fall. Taryn Aronson, its chief operating officer, expects that’ll be a challenge. What is her company going to offer? “Competitive wages for the local market. We do invest in health benefits, in holiday pay. All of our full-time employees are granted stock options,” said Aronson.

These are the kinds of benefits smaller businesses can be hard-pressed to match.