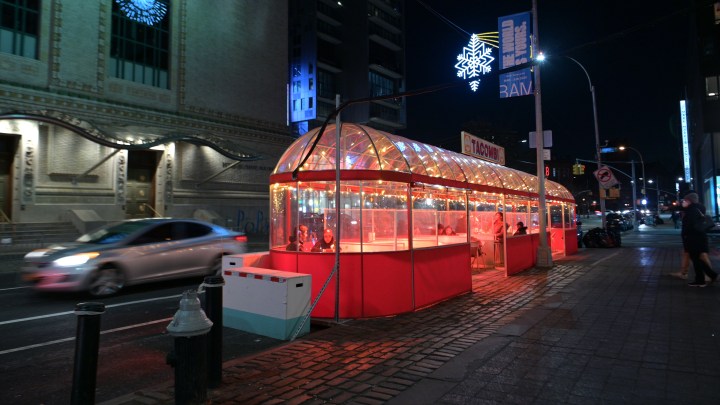 COPY
A restaurant serving patrons outdoors on a winter night. Business owners aren't sure what a new normal will look like. Michael Loccisano/Getty Images

A restaurant serving patrons outdoors on a winter night. Business owners aren't sure what a new normal will look like. Michael Loccisano/Getty Images
Listen Now

Each month, the National Federation of Independent Business releases its small business optimism index. In January, the numbers were lower than they’ve been in the last eight months.

Uncertainty is a big driver of business pessimism. And there’s certainly a lot to feel uncertain about: the rate of the vaccine rollout, the scale of the relief package and how long it’ll take consumer spending to recover.

But business uncertainty also comes down to the small things a survey can’t capture.

“We chose our location in downtown Detroit’s First National Building because there are about 4,000 employees going there every day,” said Dennis Archer Jr., who owns Central Kitchen + Bar. “I don’t know if there are ever going to be people going back into the building again.”

These kinds of doubts keep businesses from growing, even if they have the resources to. More than 60% of small-business owners surveyed by NFIB said they’re not interested in a loan.

There are some numbers in the survey that show hope. More than half of business owners surveyed were hiring last month. About the same number plan to spend money on things like equipment and vehicles. But that was mostly in certain types of small businesses, like manufacturing and construction.

“Those industries are just sailing along really well. They can’t find the workers they need. They could grow more,” said Bill Dunkelberg, chief economist at NFIB.

He thinks optimism, especially for businesses like restaurants and retailers, will continue to trend down because a lot of business owners aren’t confident that the new normal is around the corner. And they definitely don’t know what it will look like.