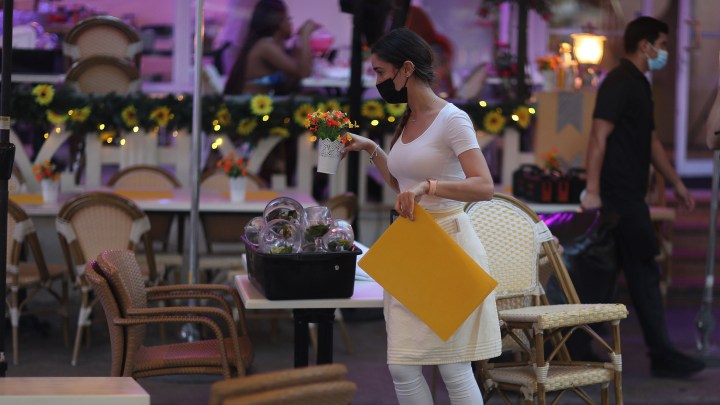 COPY
The number of restaurants that didn’t pay rent in April was down to 35% from 63% the month before. But the data also shows minority business owners are still lagging behind. Joe Raedle/Getty Images
COVID-19

The number of restaurants that didn’t pay rent in April was down to 35% from 63% the month before. But the data also shows minority business owners are still lagging behind. Joe Raedle/Getty Images
Listen Now

With warmer weather and vaccination eligibility opening up, more people are inclined to dine out. And there’s some optimism in the restaurant industry, at least among eateries still in business.

A new poll from Alignable, which tracks small businesses, shows that the number of restaurants that didn’t pay rent in April was down to 35% from 63% the month before. But the data also shows minority business owners are still lagging behind.

There are a few ways restaurants can pad their businesses when they’re strapped for cash, by paring down the menu or cutting staff. But rent is a must.

“Seeing the increase in the ability to pay rent is definitely a big data point,” said Alex Susskind, director of the Cornell Institute of Food and Beverage Management. “It’s showing that this is turning for the better.”

Susskind attributes most of the improvement to vaccines and people feeling more comfortable eating out, because when you dine in person, you eat and drink more.

For minority business owners, getting back to normal is still far away. More than half weren’t able to pay rent this month.

Thomas said some business owners worried about having to disclose their immigration status to get the vaccine. “We worked with the city to ensure that people did not have to have American passports or driver’s licenses.”

Geetika Agrawal at La Cocina, a restaurant incubator that works with women of color, said some of the delay in recovery for minority business owners is cultural.

“I have to tell you how hard it was for most entrepreneurs to even feel comfortable having to tell their landlord they can’t make rent,” Agrawal said, or having to ask for rent abatement. “They don’t have the luxury of trying to risk not making rent. And so that’s tough. It’s a different type of privilege than somebody else who’s maybe used to being able to know that the society will let them fail and catch them.”

The Restaurant Revitalization Fund, part of the American Rescue Plan Act, may catch more of them. In its first 21 days, the program will prioritize businesses owned by women, veterans and people who are socially or economically disadvantaged.