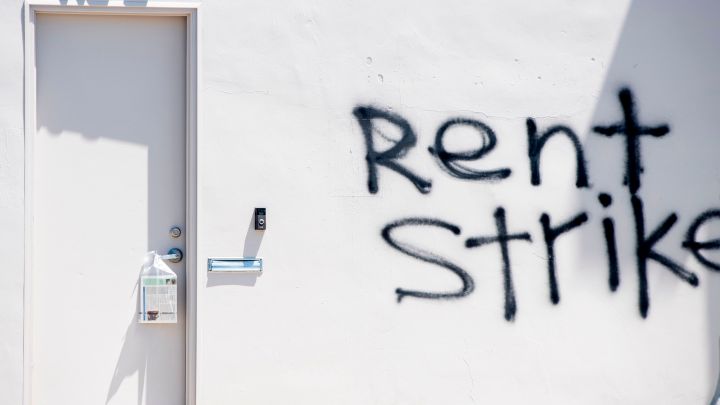 COPY
Small landlords are finding themselves on the edge of a financial cliff. Valerie Macon/AFP via Getty Images
COVID-19

Small landlords are finding themselves on the edge of a financial cliff. Valerie Macon/AFP via Getty Images
Listen Now

Four years ago, Alexandra West bought a house in Sacramento, California, for just under $300,000. It’s a classic California bungalow, painted yellow with a green door.

The house is a “cute, cottage little place in a definitely up-and-coming, hip area,” she said.

Then in 2019, West moved to the Bay Area for her job as a sales manager at a big company, and she listed the bungalow on Airbnb. A few months in, she had one really great guest.

“She was superduper nice, almost too good to be true,” West, now 38, said. “Brought me a gift, which nobody does, you know.”

At the end of her stay, the guest asked if she could extend while she looked for her own place. West was planning to sell the house eventually, so she agreed to a five-month lease, starting at the end of January 2020.

We all know what happened right after that: the pandemic.

“So she paid February rent, March rent, and then she just didn’t pay April,” West said.

The tenant sent West a letter saying her income as a real estate agent had been affected by California’s lockdown, and she hadn’t had any recent home sales.

Her lease expired at the end of June, but the tenant remains in West’s home and hasn’t paid rent for nearly a year, West said.

In September, West started the eviction process in the courts, on the grounds that the tenant hadn’t produced the documentation of COVID-19-related financial distress required by the state to avoid eviction, and that West intended to take the house off the rental market. The tenant, who declined to be interviewed for this story, is fighting the eviction.

West, who has a 5-month-old baby, is now unemployed. She was in the process of changing jobs when the pandemic hit, and the new position fell through. She’s been able to delay her mortgage payments through forbearance, which had been set to expire next month. Then, this week, the Biden administration extended mortgage protections. Meanwhile, West still has to cover the utilities on the Sacramento house and has her own rent and living expenses in San Jose.

“I’ve got to poke at the media a little bit here,” she said. “There’s been a massive amount of coverage about tenants’ plight, and I do believe 100% that there are a lot of tenants who deserve and need help, but there’s been little to no talk about the people like me who are facing a financial cliff.”

It’s hard to know how many people are facing that cliff. According to census data, about three-quarters of rental properties are owned by individual landlords. About a fifth of renters in single-family homes and small apartment buildings are behind on their rent, and those kinds of buildings tend to be owned by mom and pop landlords, said Alexander Hermann, a research analyst at Harvard University’s Joint Center for Housing Studies.

“There’s plenty of reasons to suspect that small landlords are faring worse than some of the larger institutional investors that are out there,” he said. “We know this, in part, because tenants in smaller buildings, which tend to be owned by individual investors, are doing worse through the pandemic.”

Debbie and Wayne Penczek own nine units in the Baltimore area, charging from $850 to $1,300 a month. Five of their tenants aren’t paying rent.

The Penczeks both just recovered from COVID-19. Wayne, 71, is retired. Debbie works one day a week at a bank. They’ve been able to pause some of their mortgage payments, although one lender suggested they tap their individual retirement account. They’re still responsible for their properties and just had to replace a washer and dryer for a tenant who’s not paying rent. There is a county program that may cover a portion of missed rent, but tenants have to apply. Only one of theirs has, Wayne said.

“You feel like, well, the first opportunity we get, we’ll sell the properties,” he said.

If a lot of small landlords do sell, housing advocates say it could reduce the already low supply of affordable rental housing.

“I don’t think mom and pop landlords have enough protection right now,” said Joseph Tobener, a tenant rights lawyer in San Francisco. “I think there needs to be more subsidies.”

Tobener acknowledged some tenants may be taking advantage of COVID-19 protections, even if they can pay. Still, his main concern is for the millions of renters who can’t pay and could lose their housing.

“The big trend right now is landlords taking the law into their own hands, because tenants are legally allowed to stay and not pay rent and landlords are desperate,” Tobener said. “That’s the story: utility shutoffs, lockouts, harassment.”

Under a new rent-relief program, California landlords can recover up to 80% of back rent, but they have to agree not to evict, and tenants have to show proof of economic hardship before landlords like Alexandra West can receive funds through the program.

“Based on how litigious … it’s been so far, I see no reason to believe that this is going to be an option for me,” West said.

And with the courts backed up, her only option right now is to wait.