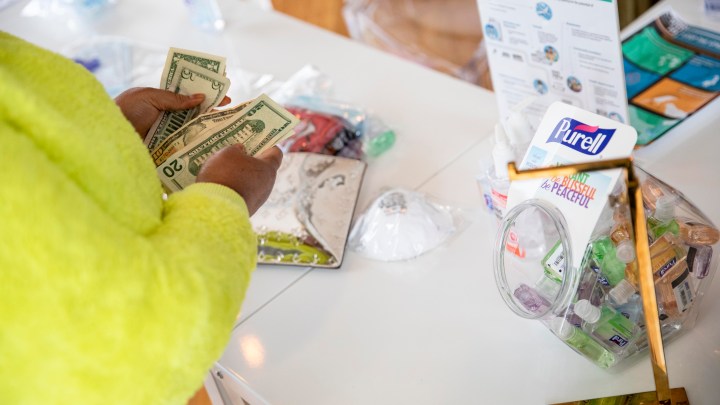 COPY
Black people are almost 13% of the U.S. population, but only about 4% of business owners. Samuel Corum/Getty Images
COVID-19

Black people are almost 13% of the U.S. population, but only about 4% of business owners. Samuel Corum/Getty Images
Listen Now

People and businesses everywhere are feeling the impact of the COVID-19 pandemic but the health and economic effects are showing up in some communities more than others. Early data shows that African Americans are dying of COVID-19 at a disproportionate rate. In Michigan, for instance, black people were 40% of the reported deaths, while 14% of the state’s population.

There’s also a separate matter about the effect of the pandemic on black-owned businesses.

“We have had a lot of problems getting equipment, especially gloves, masks, sanitizer,” Taylor said.

She was eventually able to find supplies for her staff.

“You’re looking at anywhere from 900 to 1,000 people, most of them are African American women,” Taylor said.

Black people are almost 13% of the U.S. population, but only about 4% of business owners.

“Black-owned firms with paid employees generate over $103 billion in receipts annually, with the largest share about $17 billion earned in the health care and social assistance sectors,” said Andre Perry, a fellow at the Brookings Instituion.

Those are sectors facing a lot of risk just now, for medical reasons.

The second-largest chunk of black businesses? Service industries, like retail and restaurants, which are at an especially high economic risk.

Jaclyn Johnson’s Washington, D.C., catering business Made with Love would normally be busy with corporate events, weddings and baby showers during April. Now she says “everything slowed down. First it was a slow crawl, to a total halt going from February into March.”

Johnson is applying for a grant from the D.C. government so she can keep her chef on staff and pay rent. But the fact that Johnson has even one full-time employee puts her in the minority of black-owned businesses.

“Of the 2.6 million black-owned businesses, 2.5 million have no employees,” said Ron Busby, president of U.S. Black Chambers, a coalition of black chambers of commerce.

The latest COVID-19 rescue loans tie a lot of the loan forgiveness to paying employees, which is a problem if you don’t have any.

“So that is a big concern of our small businesses, the barber shops, the consulting firms, the nonprofits that are going to be impacted,” Busby said.

His organization is trying to coach its members on how to make the most of the rescue package, but he expects most of the money will end up going elsewhere.