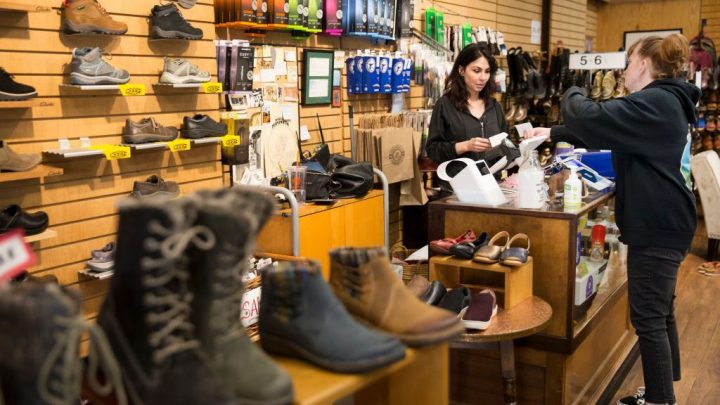 COPY
The interior of the Woolly Mammoth shoe store in Seattle, where Laurie Stewart's Sound Community Bank is based. Karen Ducey/Getty Images

The interior of the Woolly Mammoth shoe store in Seattle, where Laurie Stewart's Sound Community Bank is based. Karen Ducey/Getty Images
Listen Now

For many Americans, community and regional banks are the financial gears that keep local economies turning. That’s been especially apparent during the pandemic as these institutions have helped businesses apply for assistance, such as federal Paycheck Protection Program loans.

“Marketplace” host Kai Ryssdal first spoke to Laurie Stewart, president and CEO of Sound Community Bank in Seattle, a year ago, when the PPP launched. Since then, Sound Community Bank has helped issue hundreds of PPP loans, most of which have been forgiven. The following is an edited transcript of Stewart and Ryssdal’s conversation near the anniversary of the Paycheck Protection Program.

Laurie Stewart: So nice to talk to you, Kai. You know, we’ve been doing this for about a year now.

Kai Ryssdal: I know, that was my first question. Maybe you peeked at my notes. Here we are, a year into pandemic financial assistance, the Paycheck Protection Program. How’s it been going for the companies that you’ve worked with in the past year?

Stewart: Well, I think it’s been going well. Certainly, there’s a lot of economic uncertainty and strife, but we have seen great results from these loans and high, high levels of forgiveness. It’s not quite as frantic as it was the first time around, and the loan dollar amounts seem to be smaller this time, Kai.

Ryssdal: Sound Community Bank is more than just the PPP program. How have the other parts of your business been doing this past year?

Ryssdal: So a couple of things, and then I’ll get out of your hair. First of all, we talk a lot on this program, and have been for a number of weeks now, about this thing called pent-up demand, how once we all get vaccinated and once we all get, you know, back and out and can go places, there’s going to be a boom. What does pent-up demand look like in the banking business?

Stewart: Well, I think it’ll have a different shape, depending on which sector we’re talking about. For our borrowers that are doing construction, single-family construction, we’re already seeing some of that. I just talked to a borrower about two weeks ago that said, “I’m ready to start building houses again.” So that’ll be one thing. Then there’ll just be consumerism, right? We made more small consumer loans in the first quarter of this year than we have for ages. And these were, in many cases, small used-car loans. But that’s a new car to the person who got it, right?

Ryssdal: Yes, it is.

Stewart: It’s definitely an indication. And I was at the airport, I was lucky to spend some spring-break time with my nieces and nephews, and I flew home yesterday, and oh, my goodness, you wouldn’t even know there was a pandemic, except for the masks.

Ryssdal: Last thing. And, and I will preface this by saying you are the past president of the American Bankers Association, not the current president. So you speak here only for yourself. I wonder if you watched [Federal Reserve Chair Jerome] Powell on “60 Minutes” the other night.

Stewart: I watched a piece of it. I didn’t watch it all.

Ryssdal: Chair Powell has been steadfast in saying he’s not worried about inflation in this economy, that if we get some it’s gonna be a bump, but it’s gonna settle back down. And oh, by the way, the Fed has the tools. Not to put you on the spot, you know, evaluating Jay Powell, but what do you think of what Jay Powell had to say?

Stewart: Well, first of all, I need to tell you in all transparency that I sit on the Seattle branch of the Federal Reserve Bank. Now I’m going to put my Laurie Stewart hat on. Totally Laurie Stewart, not a Fed board member, ABA board member or even a CEO. I’m really encouraged by the chairman and his comments, and of all the things I worry about at night, inflation is not one of them. Housing prices, jobs, you know, a whole bunch of things, but I am not staying up at night worrying about inflation.