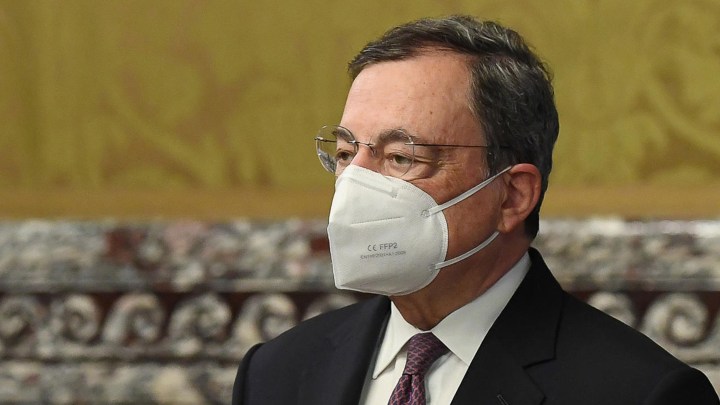 Mario Draghi could soon add a new title to his resume: prime minister.

The former European Central Bank president who famously vowed to “do whatever it takes” to save the common eurozone currency during the region’s 2012 debt crisis is now being called on to rescue the Italian economy. Early Wednesday, the country’s president, Sergio Mattarella, met with Draghi and asked him to try to form a new government.

Last week, former prime minister Giuseppe Conte resigned, despite surviving two parliamentary confidence votes. He was caught up in a political battle over his handling of the coronavirus pandemic and preliminary plans outlining how the country should plan to spend the more than $240 billion it’s set to receive from the European Union’s pandemic recovery fund.

Draghi is one of Italy’s most widely-respected public figures whom many will now look to to steer the country out of its worst economic downturn since World War II. Data published on Tuesday showed the Italian economy shrank 8.8% in 2020.

So, why Draghi? And why now? LUISS University economist Nicola Borri delved into the pros and cons on the global edition of the “Marketplace Morning Report.”

Borri: Draghi in Italy has a lot of appreciation from all the political parties, and in the general public. So there is a strong support for Draghi. And so, in this moment of political crisis in which the parties in the Parliament are not able to form a government, the idea of President Mattarella is to find the person that can unify the differences between these political parties — that decisions have to be made, and he wants a strong government. And strong government means supported by a large majority. And so the idea is that Draghi right now is the only person that can provide that.

Craig: The coronavirus crisis has caused the worst economic crisis for Italy since World War II. To help, Italy will receive $241 billion in recovery funding from the European Union. But there’s been a lot of disagreement about how to use that funding. So what might Draghi’s strategy be? What does he need to prioritize to be successful in all of this?

Borri: A good strategy would be to find a few projects that can be implemented in a relatively short amount of time, with a strong impact on the economy. Prime Minister Conte appointed a committee and this committee actually prepared a list that was very much appreciated both by the business sector observers, but soon this to-do list was forgotten. And so I think that what Draghi should do, and I think he will do, is go back to that plan. And so this means some infrastructure, but also a lot of investment into schools, priorities that I think this government will push forward.

Craig: As we saw during his time leading the ECB, we know that Draghi is obviously a good financial operator. And Italian stocks and bonds have rallied on this news today. Does this change the investing outlook for Italy, do you think?

Borri: You know, this is difficult to say. I think Draghi, clearly, from a financial point of view, is a great expert. But, I think, more importantly for Italy now is he’s such a good politician in the sense that he’s able to bring together people with very different views. And so this is extremely positive. I think that the key for his success is going to be, be a good politician meaning find the support in Parliament and outside Parliament in the general public. So if Draghi will be able to do that, I think that this would be good also for investment, and more in general.

Craig: Now, Draghi will be asked to form a new government, but can he say no to forming one? And if so, what happens then?

Borri: So of course he can [say no]. But, you know, politically, I think it’s difficult to say no to the president. What is going to happen is that he is going to accept the task to verify whether in the Parliament there is a majority, a large majority that will support him. So if he finds this majority, then he will take the office. If he realizes that he doesn’t have the majority that he needs to do a good job, he will tell this to the president. Then I think that the only alternative is the elections. It’s something that President Mattarella really doesn’t want, given the current situation.