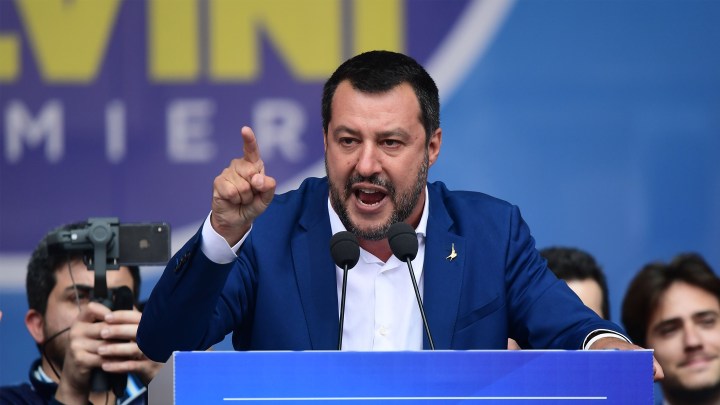 COPY
Italian Deputy Prime Minister Matteo Salvini delivers a speech during a rally of European nationalists ahead of European elections on May 18 in Milan. Miguel Medina/AFP/Getty Images

Italian Deputy Prime Minister Matteo Salvini delivers a speech during a rally of European nationalists ahead of European elections on May 18 in Milan. Miguel Medina/AFP/Getty Images
Listen Now

Looks like it’s going to be a long, hot summer in Italy. The temperature is rising in the conflict between the government in Rome and the European Commission in Brussels over the Italian budget.

The commission has just taken the first step towards fining Italy for breaking EU budget rules. Meanwhile, Deputy Prime Minister Matteo Salvini, a passionate euroskeptic, appears to be eager for a fight with the commission.

Emboldened by his right-wing Lega (“League”) party’s success in last month’s European Parliament elections, Salvini has called for tax cuts to stimulate Italy’s stagnant economy.  Those cuts — along with planned spending increases — would add to the country’s debt and may bring Italy into breach of EU borrowing limits.

But Salvini could soon have a new weapon at his disposal in this fight: a proposed financial instrument called the mini-BOT (for “mini Bills of Treasury”) which the Italian parliament endorsed last month.

The mini-BOT would allow the government to pay its way without using euros, sidestepping eurozone budget rules.

Some observers say it’s a nuclear weapon that could have repercussions well beyond Italy’s borders.

“The government would issue mini-BOTs to pay suppliers and possibly even use them to pay civil servants’ wages. On top of that, the government would allow people and companies that have received these bonds to pay their taxes with them,” explained Lorenzo Codogno of the London School of Economics, a former chief economist at the Italian Treasury.

“It’s an attempt to — among other things — bypass the fiscal rules.”

Codogno thinks Brussels is unlikely to accept such an obviously evasive tactic. But, he says, some Italian politicians are looking beyond the budget fight and pushing the mini-BOT plan as a sort of safety net; an alternative source of liquidity in the event the fight with Brussels escalates and the European Central Bank tries to limit or cut off support for the Italian banking system.

“It would be a sort of currency that’s not really a currency, that could be transformed into legal tender at some point in the future. At least, that is the idea,” Codogno said.

Andrew Hilton, director of London’s Centre for the Study of Financial Innovation, sees the mini-BOT as a negotiating tactic.

“It’s Italy flexing its muscles and telling Brussels: ‘We’re a big power. We don’t have to do everything you tell us to do. We could have a parallel currency that would enable us to get out of the euro.’ It’s a threat,” he said.

But there’s something standing in the way of the mini-BOT becoming a parallel currency: it’s structured as a tax credit. So the government would have to permit recipients to use it to pay for things other than taxes.

That’s perfectly possible, according to Agnese Ortolani, an analyst with the Economist Intelligence Unit.

“People could be allowed to use mini-BOTs to settle, for instance, energy bills, or buy train tickets, or other goods or services that are supplied by state-owned companies,” she said.

The mini-BOT could then become a kind of lira-in-waiting, a ready-made alternative to the euro.

Last month’s parliamentary vote on the mini-BOT was non-binding. If that changes, says Ortolani, there could be a big market reaction.

“It would be widely perceived by the markets as the very first step for Italy to exit the eurozone,” she said.

At the threat of the eurozone losing its third-largest economy, the short-term market reaction would be fierce. Experts say the euro would plummet and Italian bond yields would soar. Any parallel currency, like the mini-BOT, would likely fall further and faster than the euro.

That might explain why a majority of Italians, according to opinion polls, do not want to leave the eurozone.

“I don’t think it’s going to happen,” Lorenzo Codogno told Marketplace. “But at this stage, with this government, I think it’s unlikely but not impossible.”

The Italian Treasury has tried to calm investor fears, insisting it is not planning to introduce a parallel currency. But anxiety is growing.

A senior figure in Salvini’s Lega party hasn’t helped matters. Claudio Borghi recently posted a mock-up of the mini-BOT, which looks … exactly like a banknote.