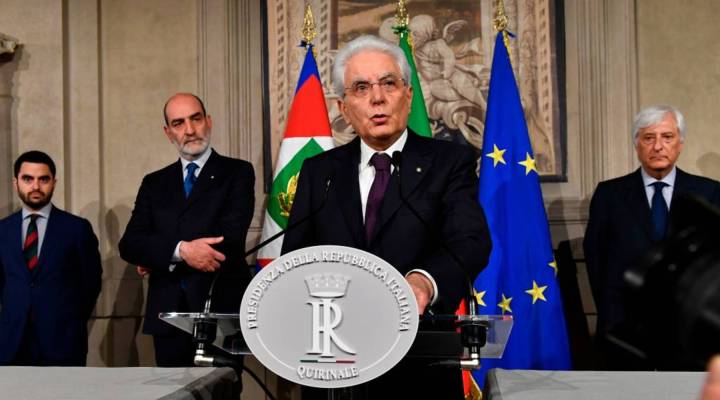 COPY
Italian President Sergio Mattarella addresses journalists after a meeting with Italy's prime ministerial candidate Giuseppe Conte on Sunday at the Quirinale presidential palace in Rome. Italy's prime ministerial candidate Giuseppe Conte gave up his mandate to form a government after talks with the president over his cabinet collapsed.  VINCENZO PINTO/AFP/Getty Images

Italian President Sergio Mattarella addresses journalists after a meeting with Italy's prime ministerial candidate Giuseppe Conte on Sunday at the Quirinale presidential palace in Rome. Italy's prime ministerial candidate Giuseppe Conte gave up his mandate to form a government after talks with the president over his cabinet collapsed.  VINCENZO PINTO/AFP/Getty Images
Listen Now

Turbulent financial markets in Europe are setting a risk-averse mood among market players around the world this morning. The Dow dropped more than 400 points, while key indices in London, Spain and Italy fell. The euro is a deal for Americans, with the European single currency falling below $1.16 for the first time since late 2017.

The reason for these declines: political uncertainty.

In Spain, center-right Prime Minister Mariano Rajoy faces a no-confidence vote on Friday, which will follow a debate about whether socialist leader Pedro Sánchez should replace him.

Italy is similarly facing turmoil. Over the weekend, populist parties attempted to form a government, which ultimately failed after Italian president Sergio Mattarella vetoed their choice for finance minister, Paolo Savona, a euroskeptic who once described the eurozone as “a German cage.” His decision led to the populist coalition’s collapse before it took power.

“The euro seems to be the head of the storm at the moment,” said Jasper Lawler, head of research at London Capital Group.

Now, the Italian president has nominated Carlo Cottarelli, a former official at the International Monetary Fund, to create an interim government.

“I think the fact that this would-be economy minister, Paolo Savona, does take the view that Italy should be outside the eurozone, might well feature more prominently in the campaigning whenever it gets going for the next election,” said Andrew Walker, an economics correspondent for the BBC.

What does this say about the health of the euro, the eurozone and the European Union?

“Well, there certainly is a lot of political conflict in Europe about migration issues [and] the degree to which people feel alienated from the EU. And the most extreme case of that, of course, is the U.K. and the decision to leave  the EU altogether,” Walker said.

However, Walker added that he doesn’t see any immediate prospect of a widespread move toward the dissolution of the eurozone, and that the euro is still “relatively popular.”

“It’s also important to remember that the markets are not in anything like the kind of conditions they were when the eurozone crisis was at its most intense back in 2011 and 2012,” he noted.