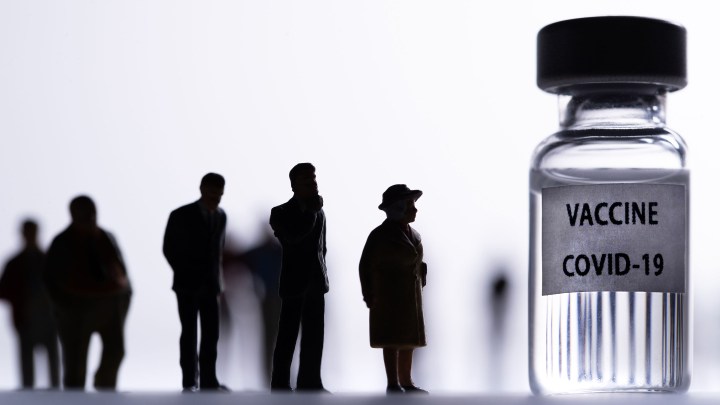 The European Union and vaccine manufacturers have been locked in an increasingly bitter battle this week over where the 27-nation bloc is in the priority list for receiving COVID-19 vaccines.

On Wednesday, confusion reigned over whether British-Swedish drug giant AstraZeneca had pulled out of a planned meeting with EU officials, who insisted the company canceled without explanation. However, the drugmaker asserted it would definitely attend the meeting, while an Austrian minister said it was being postponed by one day.

As the will-they-won’t-they continues, the EU is asking AstraZeneca to provide a full explanation of why it decided to cut supplies bound for the EU, and specify how many vaccine doses have been produced worldwide and where they were sent. On Tuesday, the company warned of production problems and said it made the decision to cut vaccine deliveries to the EU by 60% between January and March. It also said shipments to Thailand and Norway would also be delayed.

AstraZeneca denied vaccines were rerouted away from the European bloc to be sold for a profit elsewhere. Previously, the company said it would not sell the vaccines for a profit during the pandemic.

The row all comes down to signed contracts. Specifically, which countries signed procurement agreements and when. AstraZeneca said Britain will get its doses of the vaccine well before the EU, partly because it inked supply contracts three months earlier.

On the global edition of the “Marketplace Morning Report,” the BBC’s Victoria Craig spoke with Flavio Toxvaerd, an economist at Cambridge University, about how supply contracts for coronavirus vaccines work, and whether more localized production could alleviate some of the tension caused by production constraints.

Flavio Toxvaerd: There are several aspects of these agreements. The first one is one of timing; that is when they were struck. And the second one is somewhat more complex, because it has to do with the details of the agreements themselves. Now, as of today, a very, very small minority of these contracts have actually been made public, so it’s difficult to know exactly what’s in them.

Yesterday, the CEO of AstraZeneca went out and actually said that the agreement that AstraZeneca had with the European Union was a best-effort type model, but it was not a firm commitment to specific quantities at specific points in time. It was really just best effort, which doesn’t seem to square with the notion that there has been a breach of contract. So that’s one thing. And the other thing is basically the timing. And it’s clear that the U.S. or the U.K. have have acted faster than the European Union. And for those reasons, they have not run into the the restrictions in delivery that seem to be an inevitable outcome of these disruptions to production that we’re seeing.

A slower vaccine approval process for the EU, and less investment upfront

Victoria Craig: So how has the EU’s slow approval process of some of these vaccines contributed to this slow distribution process now?

Toxvaerd: It’s clear that the European Union has acted slower than has the U.K., for example. But let’s also not forget that [there are] inherent risks in the strategy that the U.K. has adopted. They’ve done emergency authorization by doing a rolling review of partial data as it came in, whereas the EU has also done some of that, but maybe has relied more on review at the end of the process. Now, one thing that has been important is that the U.K. has actually lifted liability of the producers. And this is, of course, a calculated risk that may or may not pay off.

In the end, the EU has maybe taken more time to negotiate these deals, because liability has been more of an issue for it. But, to some extent, these agreements have been calculated gambles because many of these agreements were written before that final approval of the vaccines. And therefore all governments, what they have done is that they’ve invested in a portfolio of promising candidates, hoping that the ones they had bets on actually would pay off in the end. And in this particular instance, the United Kingdom is has done very well for itself, because AstraZeneca has been one of the early ones to actually get up and running in terms of production.

Craig: Yesterday, EU Commission President Ursula von der Leyen made the point that the EU have made investments in expanding production capabilities to get this vaccine to the market. New data have shown that the U.S. and the U.K. have invested seven times more per capita upfront than the EU and research development and procurement. So do you think the EU’s expectation for the speed at which it will receive vaccines is realistic?

Toxvaerd: So, it’s correct, the expenditure per capita of the EU has been considerably lower than that of the other countries. But, also, let’s not forget that the United Kingdom and U.S. have been amongst countries that have been the least effective at actually managing the disease in other dimensions. So maybe they have met felt more of an urgency than the European Union.

Having said that, I don’t think anybody has illusions that the European Union has acted fast enough. Apparently, in their dealings with AstraZeneca, they were hoping to get delivery on the same schedule as to the United Kingdom, even though they had made less investment. And that does not seem to have been realistic. But could I just add one thing, which is the alternative to the European facility of having the EU negotiate for the whole bloc is certainly preferable to the alternative of having 27 individual governments or scrambling and competing for a limited set of vaccines.

The prospect for more collaboration among drugmakers across borders

Craig: We saw an unusual collaboration this morning. French drugmaker Sanofi said starting in July at its German factory, it’s going to produce more than 125 million doses of the BioNTech-Pfizer vaccine for the EU. Do you think we will start seeing more of this kind of collaboration, sort of more localized production to get these vaccines to more people more quickly?

Toxvaerd: There are real trade-offs. On the one hand, everybody seems to agree that there are great benefits to be had from cooperation across borders. Having said that, we’ve seen now that it actually matters for delivery, the country in which a facility is set up. And so it’s quite possible that going forward different jurisdictions, like the EU, like the United States, and so on, will insist that a significant proportion of the production of a given vaccine is carried out on their soil so that they can control it if it were to become necessary.

Craig: Does that decision come down to willingness from drug companies to share vaccine recipes?

Toxvaerd: I don’t think so. I don’t think that many of the problems we’re seeing now really seem to be stemming from an unwillingness from the vaccine producers. Rather, this has been a combination of tension between protecting your own population and also not hampering the access of other nations. And I think very much this has been an issue of miscoordination of policies, and also the fact that people have worked on an extremely tight schedule, which always seems to complicate matters. And there’s been several instances of large manufacturers, such as Pfizer, openly inviting other companies to actually use the production facilities. And AstraZeneca itself is actually operating on a nonprofit basis in rolling out its vaccine.

Getting vaccines to developing countries

Craig: We’ve been talking about the supply issues for developed nations. But there’s obviously also this other problem of getting enough vaccines to developing countries. And the developed nations, like the U.K. and the U.S. and other European countries, have secured more than enough vaccines to inoculate their entire population. So what do you think the solution is to really figuring out this supply-sharing problem and really getting it everywhere in the world where it needs to go?

Toxvaerd: The right approach is the model of COVAX, which is a facility set up by a number of international organizations and national governments to ensure that at least part of the production goes to developing countries. Now in, for example, in the U.K.’s example, because they have bet on so many different vaccines, if they were to actually get delivery of every single one that they have made agreements with, they will be able to vaccinate their own population four times over. And so, in that case, it is envisioned that these vaccines will be donated to other countries that may need them.

Toxvaerd: I think the moral case of giving excess vaccines to the developing countries is so overwhelming that I think it’d be very difficult for European Union politicians to stand up and say “we should have those vaccines and not a poorer country.” So even though there might be a temptation and an irritation, I think the criticism is going to be very muted.