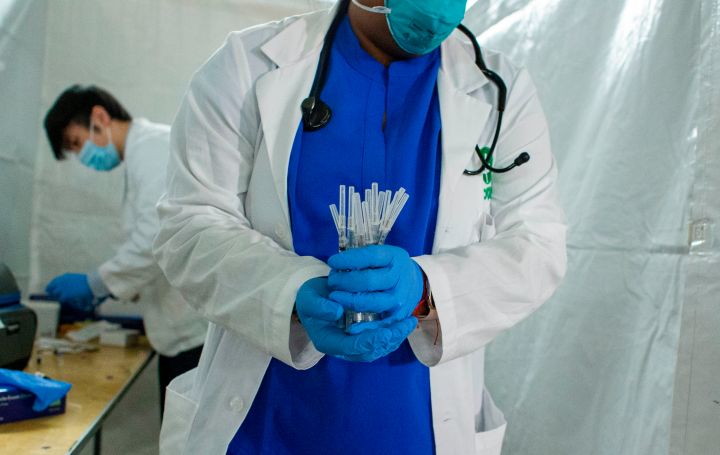 A dispute is heating up between COVID-19 vaccine manufacturers and European governments over shortfalls in supply.

AstraZeneca said production problems have slowed its manufacturing process, while Pfizer warned its supply will be lower as it works to increase capacity at its Belgian plant.

With concerns the company cannot produce enough vaccine to meet demand fast enough, the bloc has now demanded the company deliver promised doses. It gave the U.K.-Swiss drugmaker until Wednesday to outline details of what’s been produced and where it’s being sent.

It comes as governments around the world are looking to vaccines to stem high infection rates and, eventually, be able to unlock their economies.

European Commission President Usula von der Leyen sent a warning to vaccine makers at the World Economic Forum on Tuesday saying all vaccine exports to countries outside the EU will be monitored.

“The European Union and others helped with money: Large sums were invested to build research capacities and production facilities early,” von der Leyen said. “Europe invested billions to help develop the world’s first COVID-19 vaccines, to create a truly global common good. And now the companies must deliver. They must honor their obligations.”

Von der Leyen’s message came after Germany’s health minister said the stance was not about putting Europe before the rest of the world, but ensuring the continent gets its fair share of vaccines.

Distribution is a vital component of getting economies around the world back on their feet. How that distribution happens, and where those doses go, matters.

A new study released this week by the International Chamber of Commerce estimates the global economy stands to lose $9 trillion if vaccines aren’t distributed more evenly between developed and developing nations.

Selva Demiralp is an economics professor at Koç University in Turkey and former economist at the Federal Reserve Board. She is one of the authors of that study and spoke about the findings with the BBC’s Victoria Craig on the global edition of the “Marketplace Morning Report.”

Selva Demiralp: Normally, when we say economic costs, people think about the domestic factors that affect production. So there’s this misperception that if you are fully vaccinated, then you’re going to minimize, and essentially no cost from the pandemic. We say that this is not the case because economies are all connected to each other through trade linkages. When an advanced economy trades with an emerging market that is not vaccinated, first, you won’t be able to export as many goods and services to emerging markets because they are still suffering from the pandemic, and second, you won’t be able to import what is produced at emerging markets, once again, because emerging markets are still suffering, they’re lockdowns people cannot produce, incomes go down. So as a result, when you cannot import the intermediate goods that you use for the production of final goods at home, then your final production is going to decline as well.

So, in this scenario, we say costs can go up to $9 trillion but then we want to experiment with alternate scenarios. Let’s say advanced economies take four months to complete vaccination and emerging markets also have access to vaccination but it takes one year to vaccinate half the population, then the numbers go down to $6 trillion in a realistic scenario.

Victoria Craig: So does part of this just come down to needing more supply, because we know millions of vaccines have been earmarked for developed nations. Does there just need to be more output, more supply of vaccines, and those components available to countries all around the world?

Demiralp: Exactly. Yes, there might be some issues regarding the distribution, and advanced economies do have some excess supply — it seems like it. But the excess supply, as of today’s numbers, is not going to be enough for the rest of the world. So clearly, production has to go up.

Craig: So what are you recommending policymakers around the world do to combat this problem?

Demiralp I think our message is very simple. They should realize that it is actually much cheaper to go ahead and contribute to the COVAX program and make the vaccine available globally, because emerging markets and poor nations won’t be able to afford the vaccines. So advanced economies — I mean, yes, from a humanitarian perspective, there’s a noble cause. But also from an economic justification. We can see that advanced economies are going to gain far more by investing into this program, because then they’re going to trade with stronger partners, they will be able to export more and there won’t be any interruptions in their supply chains.