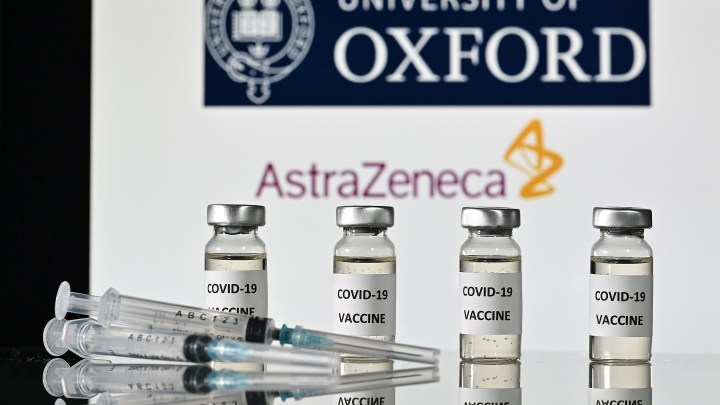 COPY
An illustration picture shows vials with COVID-19 Vaccine stickers attached and syringes, with the logo of the University of Oxford and its partner British pharmaceutical company AstraZeneca, on Nov. 17, 2020. Justin Tallis/AFP via Getty Images
COVID-19

An illustration picture shows vials with COVID-19 Vaccine stickers attached and syringes, with the logo of the University of Oxford and its partner British pharmaceutical company AstraZeneca, on Nov. 17, 2020. Justin Tallis/AFP via Getty Images
Listen Now

First, it was Pfizer-BioNTech, then Moderna. Now, Monday morning, British drugmaker AstraZeneca and its partner Oxford University are the latest vaccine makers to say large-scale clinical trials showed this third vaccine seems to work well in humans. It’s up to 90% effective if less is given, 62% effective if more vaccine is given — researchers are trying to figure out why.

The BBC’s Victoria Craig has the latest on this. She spoke with “Marketplace Morning Report” host David Brancaccio, and the following is an edited transcript of their conversation.

David Brancaccio: AstraZeneca’s candidate is cheaper and easier to store and transport. Victoria, this is an advantage when it comes to getting a vaccine to developing countries, particularly?

Victoria Craig: Yes, the AstraZeneca-Oxford vaccine can be stored at regular refrigerator temperature. The Pfizer-BioNTech and Moderna vaccines need to be stored at much colder temperatures, which has posed a challenge particularly in developing countries that don’t have the infrastructure — or the funds — necessary to keep the doses ultra cold.
And price is also a plus for getting widespread distribution: The Oxford vaccine will cost about $4. Pfizer’s is around $20 and Moderna’s is $34.

Brancaccio: So, we have results of several clinical trials. What happens now?

Craig: The vaccines will need to get their regulatory stamps of approval before they can be distributed. Then, each country’s health departments will need to decide distribution priority. Front-line workers and vulnerable populations are, in many cases, will be first.

AstraZeneca’s biopharma chief, Sir Mene Pangalos, explained the company is working with manufacturing partners all over the world, including India’s Serum Institute.

Mene Pangalos: It’s a relatively easy vaccine to distribute around the world. Manufacturing has already begun. We have the capacity to distribute up to 3 billion doses next year.

Brancaccio: How soon could the rollout happen?

Craig: For this AstraZeneca vaccine, Britain’s health secretary says as soon as next month, with a big U.K. push in January.