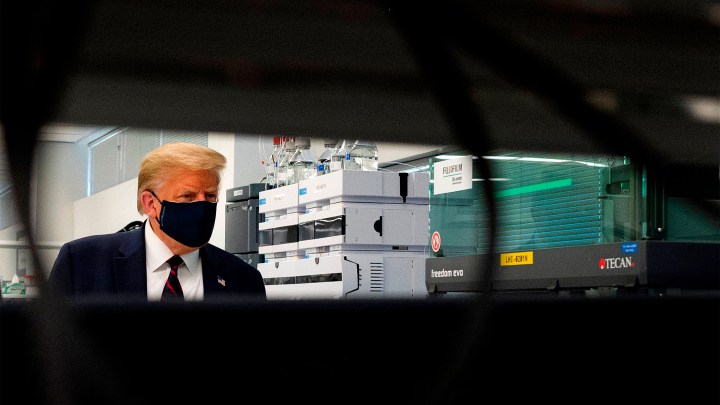 President Trump wears a mask as he tours a lab where they are making components for a potential vaccine in Morrisville, North Carolina. Jim Watson/AFP via Getty Images
COVID-19

President Trump wears a mask as he tours a lab where they are making components for a potential vaccine in Morrisville, North Carolina. Jim Watson/AFP via Getty Images

The World Health Organization is tracking 164 different candidates for a COVID-19 vaccine. Vaccines typically take years of development, and then careful safety and efficacy testing, before production can be ramped up. But for COVID-19, some researchers say they’ll have a vaccine by the end of this year, or the start of 2021.

Some governments, including the United States, U.K., and the broader European Union, have made deals with drugmakers to secure millions of doses, raising concerns about the equity of vaccine availability.

The stakes are high. A vaccine is seen as key to fully reopening the economy. Without one, it will be difficult to allow free movement of people around the country, and the world, with impacts on tourism and trade.

Below are answers from experts on some of the common questions about a possible vaccine.

How close are we to having a vaccine?

The large number of clinical trials either underway, or planned, is a good sign. Although scientists are doing everything they can to streamline the development process, there are some steps that cannot be shortened. Proving safety in humans, for example, means giving the vaccine, and then just waiting.

“We’re much further along than in past pandemics,” said Bunny Ellerin, director of the Healthcare and Pharmaceutical Management Program at Columbia Business School. Experts say the start of 2021 is the earliest a vaccine is likely to make an impact.

What about efforts to streamline development?

In the U.S., the government’s Operation Warp Speed aims to have 300 million doses of a safe, effective, vaccine available by January 2021. It’s funding the testing of vaccine candidates.

“Rather than eliminating steps from traditional development timelines, steps will proceed simultaneously, such as starting manufacturing of the vaccine at industrial scale well before the demonstration of vaccine efficacy and safety as happens normally,” according to a statement from the Department of Health and Human Services.

That could make a vaccine available more quickly, if the bet pays off, and one of the tested candidates proves effective. Otherwise the manufactured vaccine will be wasted. HHS says this increases the financial risk, but not any safety risk.

Who will get the vaccine?

“I wonder that too,” said Ellerin. She said the decision making process for how a vaccine is rolled out is not transparent.

Decisions will have to be made about who gets the vaccine first, and different countries will likely make different decisions. “Common wisdom is perhaps frontline workers should get the vaccine first, because they are most at risk,” she said. Other at-risk groups include the elderly, and people living in group settings and close quarters.

Global health agencies like GAVI plan to buy and distribute vaccines where they are needed around the world, but some wealthier countries are making their own deals. The U.S., U.K., and EU have agreements with Pfizer, BioNTech, AstraZeneca, and Moderna. Some experts say that could undermine efforts to control COVID-19 around the world.

“I think the challenge here is there is an assumption that if I can just get enough vaccine for my country, my populations, I’m fine,” Seth Berkley, chief executive of GAVI, told Marketplace. He said the only way to fully get back to normal is to suppress the virus around the world.

Will life go back to normal with a vaccine?

“That’s absolutely not a realistic expectation,” said Ellerin. “Getting the vaccine is step one.” The next hurdle is distribution. The supply chain for a vaccine is more complicated than one for pills, for example, and vaccines have to be administered by a health care professional.

“A vaccine is not going to be a magic bullet,” agrees Anne W. Rimoin, epidemiologist at UCLA, and director of the Health Research and Training Program. She cautions it will take a long time to be distributed to everyone, and to be effective at controlling a virus, we need a critical mass of the population to either be vaccinated or to have immunity through an infection they’ve recovered from.

A recent poll suggests that only 50% of Americans plan to get a COVID-19 vaccine when it’s available.

“I think that we’re still gonna have to wear masks and take all the preventive measures that we’ve been taking for a while,” said Ellerin.