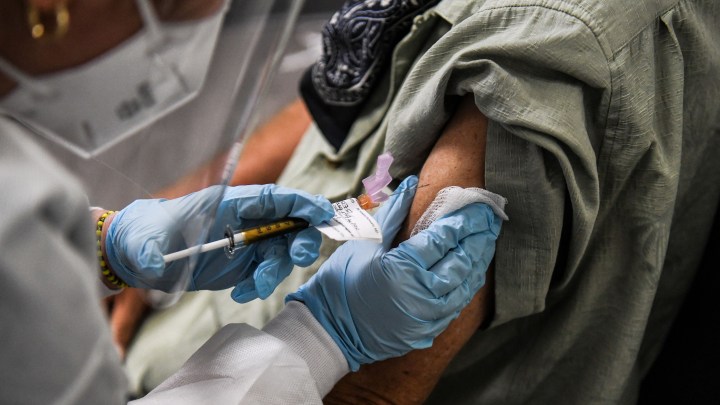 COPY
A volunteer receives a COVID-19 vaccination at the Research Centers of America in Hollywood, Florida. Chandan Khanna/AFP via Getty Images
COVID-19

A volunteer receives a COVID-19 vaccination at the Research Centers of America in Hollywood, Florida. Chandan Khanna/AFP via Getty Images
Listen Now

Another day, another piece of strikingly encouraging news in the race for coronavirus vaccines: The University of Oxford and pharmaceutical company AstraZeneca said their vaccine is 70% effective on average, based on preliminary data.

The speed of this vaccine chase is unheard of. The previous record for delivering a vaccine from lab to market was four years; it was a shot for mumps.

Why is this happening so fast this time around? A whole set of factors, involving the research community, government, industry and the public.

In January, as the World Health Organization was holding its first emergency meeting on a dangerous new virus, researchers in China had already published the virus’ genetic sequence. This provided the underlying code for a virus with a signature spike on its surface.

This allowed drugmakers to spring into action immediately.

“That was critical,” said Angela Rasmussen, virologist and fellow at the Georgetown Center for Global Health Science and Security. “Moderna and Pfizer and all these other vaccine manufacturers started adapting that spike protein sequence to their particular vaccine technology.”

This was just one of several timesaving steps and strokes of luck. For one, this virus closely resembles other coronaviruses researchers and vaccine makers have studied.

“Vaccines were developed for both SARS-classic and for MERS coronavirus,” Rasmussen said, “so we could use that preexisting base of knowledge for this virus.”

The first two drugmakers out of the gate this spring were Pfizer and Moderna. Both employ a relatively new vaccine technology built for speed that uses messenger RNA, a component of our genetic information. To illustrate how fast mRNA works, Rasmussen explained how normal vaccines are made, using the flu as an example.

“They are manufactured in embryonated chicken eggs. And you basically have to inject it into that chicken egg, wait for the virus to grow up to large quantities, and then you have to chemically inactivate it.”

That’s a lot of time-consuming and expensive steps in the lab. By contrast, mRNA uses no eggs and zero chickens. What’s injected is merely genetic instructions for the human body to make the SARS-CoV-2 virus protein, which then triggers the immune system to crank out antibodies.

“Essentially, the human body does the vaccine manufacturing, if you want to think of it that way,” said Jason Schwartz, vaccine policy scholar at the Yale School of Public Health. “So it’s a slimmed-down package that gets you into the pipeline sooner.”

“We ramp up manufacturing of the vaccines while we are running phase 3 trials,” operation head Moncef Slaoui said in a Department of Health and Human Services explanatory video. “If they turn out to be efficacious and the FDA approves them, we will use them. If they are not efficacious, then we won’t use them.”

The idea is, vaccine supply would be ready to ship out immediately.

“That’s a testament to, I think, the researchers and their efforts to reach potential research subjects,” Schwartz said. “And it’s also, I think, a testament of individuals who volunteered. I know folks who are professors and vaccine researchers who signed up to be subjects themselves.”

There’s one last timesaver to mention: the trials themselves.

One key question in any vaccine trial is how many people end up sick. And a trial needs to tally a certain number of sick people before it can wrap up.
For these trials, subjects only have to show signs of mild COVID-19, as well as a positive test, to count.

“If you’re measuring a severity of illness that’s very common, like mild illness, you will get there much faster than measuring severe illness, which happens less frequently,” said Peter Doshi, a drug policy researcher at the University of Maryland.

This system worries Doshi. He said severe cases that lead to hospitalization or death are what really matter in this pandemic. But the trials, as he sees it, are not designed to focus on severe cases and whether vaccines prevent them.

“We are not studying them in a rigorous way to find out,” Doshi said. “So we’ll be left with this ‘maybe.’ “

Hurrying up can bring other trade-offs. The early vaccine candidates from Pfizer, Moderna and now AstraZeneca require two doses. That presents the logistical challenge of tracking people, tracking doses and hoping people return for follow-up shots.

“Even just getting people to get one dose of the influenza vaccine, we’re lucky if we hit 60, 65% of the population,” Schwartz said. “And that’s after many, many years of flu vaccine campaigns. So two doses will be that much harder.”

A separate vaccine that Johnson & Johnson is developing takes just one injection. Its trials are still going, but tortoises have been known to outrun hares.

And the first vaccine to market isn’t always the one given to the masses.
So we’ll need a lot of corporate runners in this race.