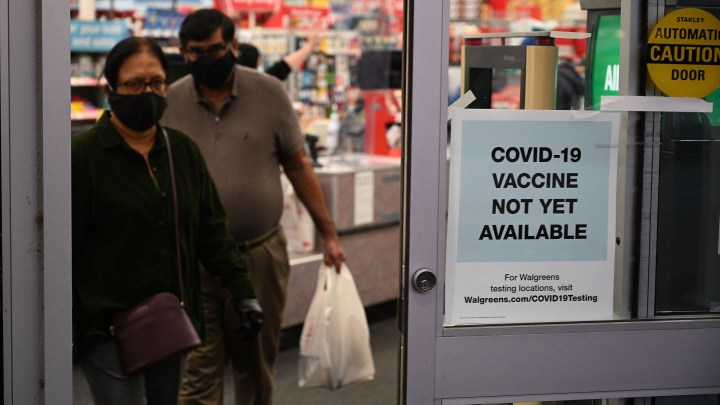 COPY
Dr. Rachel Levine, Pennsylvania’s secretary of health and president of Association of State and Territorial Health Officials, is "very confident" in the state's vaccine plan, but says it will need more funding. Robyn Beck/AFP via Getty Images
Fast-Track Vaccines

Dr. Rachel Levine, Pennsylvania’s secretary of health and president of Association of State and Territorial Health Officials, is "very confident" in the state's vaccine plan, but says it will need more funding. Robyn Beck/AFP via Getty Images
Listen Now

As the world gets closer and closer to a viable and fully effective COVID-19 vaccine, states are also working hard to get themselves ready for the huge responsibility of distributing the vaccine in an efficient and equitable fashion.

Is the state of Pennsylvania ready? “Marketplace Morning Report” host David Brancaccio put that question to Dr. Rachel Levine, Pennsylvania’s secretary of health and president of Association of State and Territorial Health Officials. Below is an edited transcript of their conversation.

David Brancaccio: Let’s just zoom in on Pennsylvania, your state. How is Pennsylvania thinking about who comes first, second, third, once vaccines start coming in?

Rachel Levine: Well, we have been working on our vaccine plan for months and months in collaboration with the [Centers for Disease Control and Prevention] and other states and cities. And we absolutely have to have a very important health equity lens to our distribution and administration of the vaccine. What we hear from the CDC is that the vaccine is going to be prioritized in three phases. And the first phase will be primarily health workers that have direct contact with patients with COVID-19. And then other health workers as possible. And then certainly with a strong focus on seniors in long-term care living facilities, which are a very vulnerable population. But we have then other plans for other phases where we need to prioritize very vulnerable communities.

Brancaccio: How are you feeling about your overall plan, as it stands now, going into Thanksgiving for distribution, once vaccines become available — lots more work to do or, like, where are you with it?

Levine: Well, we’re very confident of our plan. It’s always going to be a draft and a work in progress, because there are some specific details that we won’t know until they happen. When does the vaccine, for instance, the Pfizer and then the Moderna get approved? How much vaccine will specifically be available to Pennsylvania for each vaccine and how they’re going to be rolled out on a monthly or weekly basis? And then what about the vaccines that are in the pipeline, the AstraZeneca-Oxford vaccine, Johnson & Johnson, etc. So it’s going to have to be nimble and adapt to the circumstances on the ground. But we’re very confident in our plan, and we stand ready to distribute and administer the vaccines when they’re available.

Brancaccio: I’m not a Pennsylvania resident, but you know, just asking for a friend. How might school teachers get prioritized?

Levine: School teachers are absolutely essential personnel. Of course, education for our children is so important. So school teachers would be prioritized in that phase two, where we’re able to immunize other priority workers and other vulnerable communities.

Brancaccio: So if you’re not in a specifically vulnerable community, maybe you’re 55 and under, safely working from home, in generally good health, it could be a while before you get the vaccine?

Levine: We don’t know exactly when the the vaccines would be rolled out. It’s very hopeful that the Pfizer vaccine and then the Moderna vaccine could be rolled out in December into January. But we do anticipate that phase one will take several months and then leads right into phase two. A lot of that will depend upon the rollout of further vaccines that are in the pipeline, the AstraZeneca-Oxford vaccine, [the] Johnson & Johnson vaccine, if they are deemed safe and effective. But it could be more the end of spring, beginning of summer, before the general population is able to have access to the vaccine.

Brancaccio: Yesterday, we heard from Claire Hannan. She’s head of a nonprofit that represents state health officials. She’s not seeing the extra money from the federal government that states are asking to help with this distribution. She’s not seeing it anytime soon. What might that mean for your state, Pennsylvania?

Levine: Well, it is important that we get further funding for the distribution and the administration of the vaccine. We know that substantial funding has been dedicated to Operation Warp Speed and the development of the vaccines. And that’s been absolutely necessary. And we’re very excited that it looks like it’s going to be very successful. But we need resources to be able to then distribute these precious vaccines and administer them to the population. So we’ll be continuing to advocate through ASTHO, as you mentioned, the Association of State and Territorial Health Officials, as well as through the governor’s office and our federal delegation to the federal government for further funding.