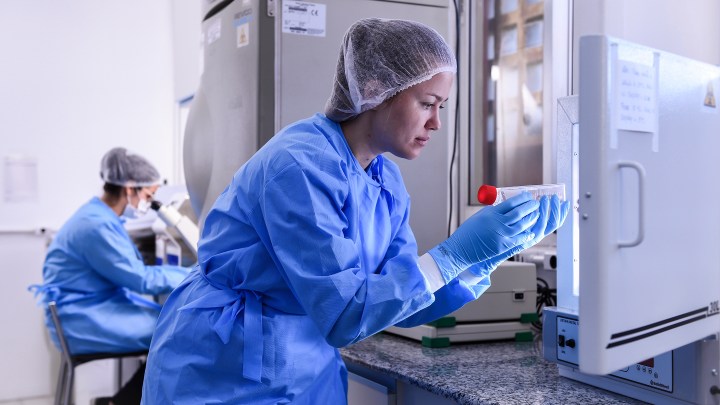 COPY
"The science can be good, but it is of no value if it doesn't ultimately get to the people in an appropriate, safe, secure way that will allow them to derive the benefit," says Thomas Tighe of Direct Relief. Pedro Vilela/Getty Images
Fast-Track Vaccines

"The science can be good, but it is of no value if it doesn't ultimately get to the people in an appropriate, safe, secure way that will allow them to derive the benefit," says Thomas Tighe of Direct Relief. Pedro Vilela/Getty Images
Listen Now

Two pharmaceutical frontrunners in the race for a COVID-19 vaccine are using a gene-based approach to tackle the virus. Both Pfizer and Moderna are using messenger RNA, or mRNA, in their leading vaccine candidates.

The use of this molecule in a vaccine poses a distribution logistical problem: how to keep the shot viable. That’s because these vaccine candidates have to be kept ultra cold — minus-112-degrees-Fahrenheit cold.

This could pose a problem for storage and the supply chain. Thomas Tighe, president and CEO of Direct Relief, a nonprofit medical distributor in California, explained how to “Marketplace Morning Report” host David Brancaccio. The following is an edited transcript of their conversation.

David Brancaccio: So we’ll see which vaccines get approved. But a couple of the leading candidates require special handling in distribution. And you do this sort of thing.

Thomas Tighe: Yeah, Direct Relief is a nonprofit that is accredited as a drug distributor in all 50 states. So we, among the things we do throughout the country is handle prescription medications that we provide at no charge, including vaccines and insulin and other therapies that require cold storage and transportation.

Brancaccio: You might be tempted to say, let’s just go out in front of some college dorms at the end of the semester and collect some old dorm fridges and do it that way. This is not going to work necessarily for the early vaccines.

Tighe: Right. A couple of the leading candidates, they’re [kept at] a lower-than-typical temperature storage. It’s sort of the guidance that’s been provided. And although vaccines are relatively straightforward, how to handle them and how to store them, it’s usually within a temperature range of 2 to 8 degrees Celsius. When you’re looking at other products, vaccines that require minus 70 degrees Celsius or minus 20 degrees Celsius, that’s a different type of storage, different equipment involved. And the temperature range is important to maintain, pursuant to whatever the manufacturers say. So that’s certainly adding to the complexity. And the fact that it’s a new disease we’re trying to address, with a vaccine that doesn’t yet exist, at a temperature range that’s outside the norm, for the entire country, there are a lot of variables that increase the the degree of difficulty involved.

Brancaccio: So who has to figure this out? I guess it’s you if you have some role in helping to move vaccines around eventually?

Tighe: Well, you know, I think that’s the question right now. I think the federal government is really managing, through Operation Warp Speed. They’re overseeing the development and the funding and kind of the direction. And, obviously, the FDA provides the regulatory framework to make sure that it’s safe and efficacious. Direct Relief’s role — we often backstop local public health agencies here in California, at the state level, at the county level and in other states during disasters. And there are gaps that exist in the United States on a chronic basis. And that is one of the reasons why Direct Relief exists, to make sure that there is a distribution capacity to get products that are needed by people who fall into the cracks. And there are often a lot of them. And even more so when there’s an emergency that occurs.

Brancaccio: So someone’s going to have to find and then pay for some kind of refrigeration.

Tighe: That’s right. Again, with the ultra-cool vaccine, there’s not a national platform for handling the volume that’s anticipated for 330 million-plus people. So I think in anticipation of building out the cold chain capacity for storage, distribution and, ultimately, administration, I think that’s the planning that is going on now at the federal level. But, you know, there’s a recognition of what needs to be in place, for which scenario, at what time frame. And I think a lot of it does involve the cold chain capacity of the country broadly, but then specific locations so that the coverage is universal, which is ultimately the plan. Recognizing that there were gaps, even with PPE, which in comparative terms is a relatively easy, low degree of difficulty distribution issue, right? It’s not heavily regulated. It doesn’t require a prescription. It’s kind of an article of clothing almost — some of the gloves and gowns and masks and face shields.

Brancaccio: Yeah, with vaccines and the cold requirements, that’s one thing, but our country has had challenges just getting a hold of and distributing personal protective equipment. And most of that doesn’t have to be refrigerated.

Tighe: And that is one of the points of sensitivity we have observed, as everyone else has — the challenge that came with just the coherent allocation, distribution, provision of PPE for health workers and everyone else. And so with that background, it’s sobering to think that it’s a relatively low degree of difficulty, in terms of distribution for all the reasons you mentioned. I think many of the same issues — who gets this product, at what time, through what method in what channel and how it’s recorded — it’s just much higher when it comes to a vaccine, particularly one that’s being developed on the fly, pushed through all the scientific rigors. But I think the degree of difficulty in handling, administering, record-keeping and tracking, it’s just a different level of complexity. So, we’re sensitive to the challenges that seemed really vexing for us to overcome with respect to PPE. And that gives us a sense of the challenges that we’re looking at with respect to vaccine distribution as well.

Brancaccio: Are you confident that the federal government is in fact doing the planning right now? Or are you, you know, issuing a call for greater attention to this?

Tighe: The material that’s been issued by the federal government is very good. The strategy is clear. The components are well outlined. But you know, someone has to do the work. The best-laid plans can be terrific plans, but they have to be executed well. And I think our antenna [is] focused on how material gets to the people, because the science can be good, but it is of no value if it doesn’t ultimately get to the people in an appropriate, safe, secure way that will allow them to derive the benefit, which is the whole intent of the program. And, with our lens focused on the gaps that always exist and the inequities in health that exist chronically, that we’re concerned [with] trying to make sure that there is a distribution capacity that is sensitive and focused on people who are often left out of the mix for the basics. As a public benefit nonprofit, of course we’re going to pitch and do anything we can to backstop the federal agencies, the state agencies or the local health agencies, because they are clearly overwhelmed. They have concurrent emergencies. The pandemic is one thing, but with the hurricanes and historic storms in the South, the historic fires out in the West, they’re not set up to do what they’re being expected to do.