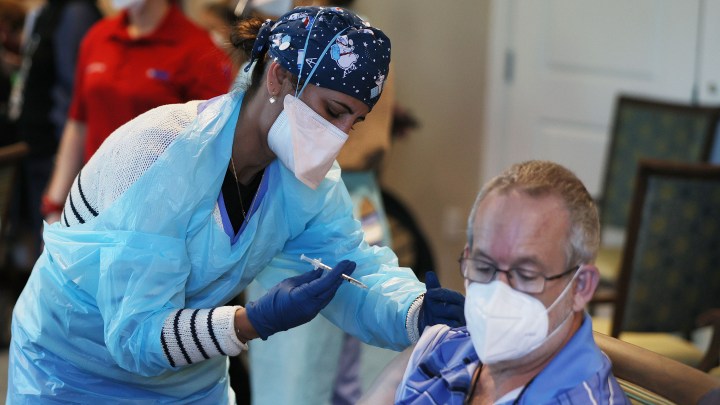 The rollout of coronavirus vaccines in the U.S. has been slower than public health officials projected. Just about 6 million people have received a dose of either the Pfizer-BioNTech or Moderna vaccine, far short of the government’s target to vaccinate 20 million people by the end of December.

Experts say some of delay may have been that the federal money to help states took so long to get appropriated in the relief package bill in Congress. There were also two weeks that pharmacy chains needed to organize the vaccine shipments they are contracted to administer in nursing homes and other long-term care facilities.

This week, New York Gov. Andrew Cuomo threatened to fine hospitals up to $100,000 if they don’t administer the vaccine quickly enough. But health care workers say some of this was inevitable, as they contend with limited resources and hospitals filled with COVID-19 patients.

“Marketplace Morning Report” host David Brancaccio spoke with Dr. Kelly Moore, deputy director of the Immunization Action Coalition in Nashville, Tennessee, for an update on the vaccine rollout and ways to speed it up. The following is an edited transcript of their conversation.

David Brancaccio: Where are we with this? I mean, a lot of headlines about a lot of vaccine already out there, but not a lot going into people’s arms. Does this surprise you?

Kelly Moore: I think that some of the promises made by federal officials were truly aspirational, but really unrealistic. If you’ve been in this business as long as I have, you know that there’s a lot of work to do to start rolling out a new vaccination program. So it’s not surprising that we’re getting a slow start, but we should see things improve in the weeks ahead.

Brancaccio: Now, we do really have to get on the stick here. Lives are at stake. Any recommendations for how we could rethink a little bit of this?

Moore: I think a couple of things would be helpful. One of those is going to be getting people experienced with giving these vaccines and rescheduling them.

The other thing is that I’m hopeful that additional funding to public health will allow public health officials to start setting up publicly accessible, large-scale vaccination clinics with the additional resources coming soon.

“It’s not surprising that we’re getting a slow start, but we should see things improve in the weeks ahead.”

Brancaccio: I’ve noted that who gets vaccinated when really does vary by state. This is the tradition, even before COVID-19, that the CDC recommends but doesn’t mandate?

Moore: That’s right. But in public health at the state and local level, we consider their recommendations nearly scriptural. They are generally supported by the best available evidence. And so, traditionally, we’ve been able to really hang our hats on their recommendations.

Brancaccio: But this time, it seems different? Even though there were always recommendations, this time some states are saying “no, we can figure this out ourselves.”

Moore: Well, I think over the last year, there’s been a lot of confusion about various aspects of the pandemic and the response to the pandemic, whether it came to testing and how testing was done, or contact tracing. And states have felt like CDC wasn’t providing enough guidance, or perhaps the best guidance. There were questions and concerns about political influence on that guidance. And that undermines the credibility of this incredibly important agency.

And I think we’re seeing the results of that in states choosing to go their own way instead of following these guidelines. And it does create more confusion when one state is doing something different than the state next door. So my hope is that we can restore trust in CDC and restore our ability to cooperate across state lines.