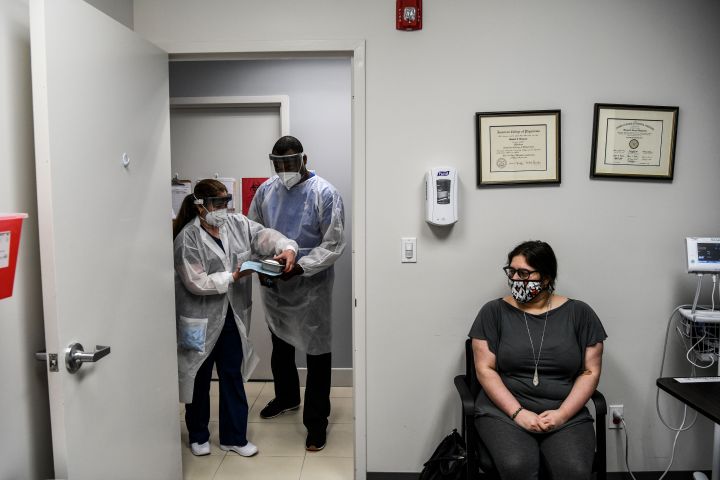 COPY
"The real big challenge for COVID vaccination is that we're talking not just about people at risk, but we're talking about everybody," says David Salisbury, former chair of the World Health Organization's Strategic Advisory Group of Experts on Immunization. Chandan Khanna/AFP via Getty Images
Fast-Track Vaccines

"The real big challenge for COVID vaccination is that we're talking not just about people at risk, but we're talking about everybody," says David Salisbury, former chair of the World Health Organization's Strategic Advisory Group of Experts on Immunization. Chandan Khanna/AFP via Getty Images
Listen Now

The European Commission is expected to approve on Tuesday a supply contract for Pfizer’s COVID-19 vaccine, which the company this week said is more than 90% effective according to early clinical trial data.

The vaccine is still undergoing tests, but once it — or another candidate — gets the regulatory seal of approval, how is a vaccine program of this size and scale rolled out worldwide?

It’s not just bottling doses, finding enough syringes or transporting vaccines at the right temperatures. Public health officials have large questions looming, like who gets the first doses: front-line workers or vulnerable populations?

David Salisbury has years of experience with those kinds of decisions. He worked as the chair of the World Health Organization’s Strategic Advisory Group of Experts on Immunization, which determines processes for mass inoculation once vaccines are approved.

The following is an edited transcript of his conversation with the BBC’s Victoria Craig on the global edition of the “Marketplace Morning Report.”

David Salisbury: The real big challenge for COVID vaccination is that we’re talking not just about people at risk, but we’re talking about everybody. And if you want to try to vaccinate everybody, that’s an enormous undertaking. And there isn’t a blueprint.

Victoria Craig: The U.K. Government unveiled some of its plans for all of this. It says it wants vaccination clinics open seven days a week, 12 hours a day, at a cost of nearly $200 million. Is that the sort of thing we could see replicated around the world?

Salisbury: Well, I think people are going to have to adapt. If you go to countries that have recently been doing polio campaigns, they’ve got really good, trained people who know how to vaccinate large numbers, but they’re good at vaccinating children. You’ve got, in industrialized countries, programs that are good at vaccinating older people for flu, and they will have to adapt. You will choose what’s going to be the best to get both the vaccine and the vaccination to as many people as best you can.

Prioritizing who gets a COVID-19 vaccine

Craig: And you touched on this, but prioritization will be key. On Monday, Pfizer said it’s going to make 50 million vaccine [doses] in 2020 and up that to 1.3 billion in 2021. But how do you prioritize various populations because there are various at risk people in individual countries, but then there are also countries themselves that have invested in tens of millions of doses each. How do you know who gets what when?

Salisbury: Each company will have made its choices about how it will split up what it produces to industrialized countries, who’ve got contracts in place, but also to COVAX, the coalition for making sure that less wealthy countries have access to a vaccine. And you make choices based on risk. And so if the greatest risk is for older people in care homes, and care home staff, then they will be at the front of the list. And if health care workers are critically important in maintaining health care services, you want to protect them, too.

I’ve had painful experience about some of these choices. I remember during a meningitis campaign that I was responsible for taking a phone call one afternoon from a father, who said that his 17-year-old son had been vaccinated three weeks before, and he was hugely grateful for that. But his 13-year-old son who was not in the priority group had died the day before. So when we make prioritizations, there will be consequences, always, from those choices. But we try to make them with the best interests of the most people at heart.

Craig: If there is a second or third vaccine that is approved, how does that change all of this calculus that’s already sort of being laid by various countries like the U.K.?

Salisbury: Clearly, you are going to hope that all of your vaccines are as efficacious and have the same safety profile. And let us take that as an assumption. The Pfizer vaccine requires extremely challenging distribution arrangements, minus-80 [Celsius] throughout its distribution, and a relatively short time in normal refrigeration. Now, if that’s the only thing you’ve got, that’s what you’re going to use. But as more products come on, you might want to adapt how you will be delivering your program, given additional flexibility from vaccines that you could almost put in your pocket.

Convincing lower-risk populations to get a COVID-19 vaccine

Craig: So, given all of your experience with rolling out some of these new vaccine programs, what do you see as the biggest hurdle still yet to come?

Salisbury: I think the biggest hurdle is going to be ensuring high coverage, because we know from flu vaccine in this country [the U.K.] that we can vaccinate close to 75% of people over 65. Very few other countries can achieve that. Under 65 with risk factors, we only get 50%. And other places don’t even do as well as that. And we’re now going to be trying to vaccinate all of those people younger than, let’s say, 50 who don’t have risk factors. And persuading them, where the benefit is less because the risk of the disease is less, may be problematic. And I think it will be for, quite a while, “vaccines plus” — plus being other social interventions to try to minimize transmission. We should be very careful about thinking we can give up on social distancing as soon as a vaccine is available. I think it will be vaccine plus for quite a while.

Craig:  How long is quite a while?

Salisbury: Well that depends on the virus. Coronavirus, back in 2006, well, that sort of disappeared. Or it might turn into just like a common cold virus. But we have to assume that we will see other waves of this virus, particularly in the winter, until we know it’s gone. So I can only hope it will be short, but we have to be prepared for this to be a longer haul.