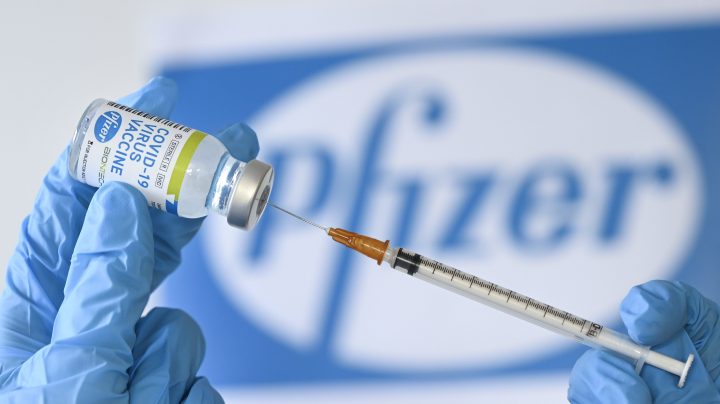 COPY
U.K. regulators were the first in the world to approve the coronavirus vaccine made by Pfizer and BioNTech for widespread use. Vincent Kalut/Photonews via Getty Images
Fast-Track Vaccines

U.K. regulators were the first in the world to approve the coronavirus vaccine made by Pfizer and BioNTech for widespread use. Vincent Kalut/Photonews via Getty Images
Listen Now

The U.K. today became the first Western country in the world to approve a coronavirus vaccine for widespread emergency use. That paves the way for the “largest-scale vaccination campaign” in the nation’s history, according to National Health Service chief executive Simon Stevens.

Britain’s Medicines and Healthcare Products Regulatory Agency (MHRA) gave the COVID-19 vaccine created by Pfizer and its German partner BioNTech its seal of approval, saying the shot — which is up to 95% effective at safeguarding against the virus — is safe for public rollout.

Speaking in Parliament hours after the news was announced, Prime Minister Boris Johnson thanked all those who had a hand in bringing the vaccine to market.

“It is the protection of vaccines that will ultimately allow us to reclaim our lives and get our economy moving again,” Johnson said.

This vaccine, which must be stored at temperatures below -94 degrees Fahrenheit, requires two doses per person, taken 21 days apart. Vaccination centers are in the process of being set up, and 50 hospitals around the country are on standby to administer shots.

The U.K. government has already ordered 40 million doses, and the nation’s health secretary, Matt Hancock, told the BBC 800,000 of them will begin arriving from Belgium next week.

“This will start small and ramp up. The vast majority of vaccinations we expect to be in the new year,” Hancock said. “The speed at which we go will be determined by how quickly Pfizer can manufacture in Belgium. We’re not putting a precise figure on it because this manufacturing process is itself difficult and each batch has to be tested by the MHRA. It’s not just the overall authorization for this vaccine, but for each batch.”

At a press conference, MHRA chief executive Dr. June Raine sought to reassure the public that despite the fast-tracked approval process, the vaccine has undergone the “most rigorous scientific assessment of every piece of data.” She insisted that “no corners have been cut.”

The mRNA vaccine is the first of its kind to be approved for use in humans. It uses a piece of genetic code from the virus, which then teaches the body how to fight COVID-19 and build immunity.

Raine also explained that the people who receive the vaccine will be immune from the disease seven days after the second dose. In the U.K., vaccination will not be compulsory, but priority has been set for nursing home residents and those who care for them, those older than 80 and front-line health and social care workers. The U.K.’s Joint Committee on Vaccination and Immunization (JCVI) has given priority to older members of the population because risk of serious illness or death from COVID-19 rises with age.

Professor Adam Finn at the University of Bristol, who advises the government as part of his role on the JCVI, explained to the BBC’s Victoria Craig how the U.K.’s rollout of this first vaccine will work.

Below is an edited version of their conversation from the global edition of the “Marketplace Morning Report.”

Adam Finn: How we do immunization in the U.K., it’s all bought centrally, distributed and free at the point of delivery.

Victoria Craig: And when will there be more widespread rollout? Because at first, this vaccine will go to people at risk and front-line health care workers, most likely. Are drugstores already working to secure supplies that people can go to a pharmacy and get a vaccine at some point soon?

Finn: I think that’s very unlikely to be the way it will be done in the U.K., because all our vaccine programs, the NHS buys the vaccine centrally, and they’re distributed through the NHS agencies. In the case of the Pfizer vaccine, which has to be handled very carefully, it will probably be in fairly large centers where people will come and receive the vaccine. For other vaccines coming through which may need only just regular refrigeration, it will be distributed through the network of general practices that exist around the country.

Craig: Now the U.K. approved a vaccine before the EU, notably. How was Britain able to diverge from the bloc’s regulatory framework if it’s still following those rules until the end of December?

Finn: As I understand it, there is a legal mechanism which enabled the MHRA to to make this — I think it’s something similar to the U.S. emergency authorization process. So it’s not in fact the full licensure. It’s just a sort of temporary authorization to use the vaccine. And once we leave the European Union at the end of the year, they will then have to issue a normal full license authorization.

Craig: This isn’t the only vaccine going through the approval process. What are the benefits of having more than one vaccine approved on the market? Who decides who gets which vaccine for which patients and when?

Finn: The policy decision-making is done by a body called the Joint Committee on Vaccines and Immunization. Ultimately, the decisions are taken by the Department of Health within the government. In terms of the different vaccines, I guess the main advantage of having multiple vaccines at this point is that you can have larger numbers of doses and therefore move the program more quickly. But, you’re right, there may turn out to be advantages of one vaccine versus another in particular groups. The most obvious difference at the moment, though, is the handling requirements, because this first vaccine does require refrigeration at very low temperature, whereas others coming through may be easier to handle.

Craig: Could we run into a situation where patients are requesting certain kinds of vaccines from different makers, do you think?

Finn: Well, again, because of the kind of central planning approach that we have in the U.K., it’s likely to be the case that people will simply be offered a vaccine according to what’s available and it will be a kind of take-it-or-leave-it decision. No one will be required to be immunized, but because the vaccine will be provided free by the state to the population, it will just be a case of people saying yes, please, or no, thanks.

Craig: This will be welcome news, I’m sure, for many in the retail and hospitality sectors who have been pretty much locked down for much of this year, especially those in England who come out of lockdown today. Does this approval of the vaccine today mean that we’ll be getting back to business and life as usual soon?

Finn: Well, ultimately, yes. The big word is the last one, “soon,” the question mark. How quickly this will have an impact and how quickly it can be rolled out and really normalize things is a bit uncertain, I would guess. At least this is the firing gun and we’re moving in the right direction to try to get things back to normal.