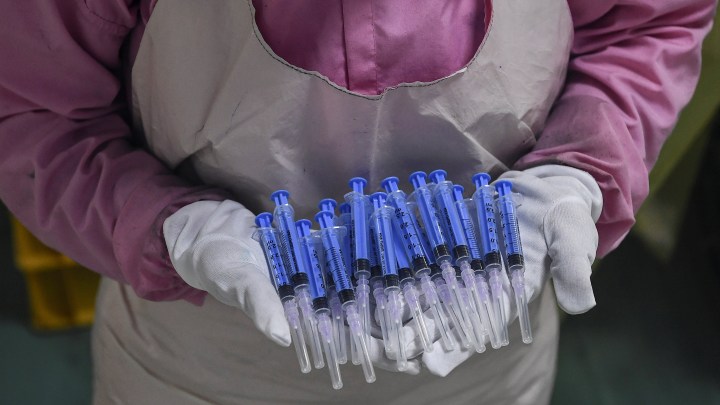 "Unless we conquer it everywhere, we're not conquering it anywhere," Dr. Larry Brilliant says of COVID-19. Sajjad Hussain/AFP via Getty Images
Listen Now

The race to develop a working vaccine for COVID-19 has brought up discussions over who should get a potential vaccine first and the ethics of prioritizing inoculation of one group versus another.

But for epidemiologist Dr. Larry Brilliant, who helped eradicate smallpox in the 1970s, the most effective way to stop the COVID-19 pandemic comes down to one simple biological viewpoint: when everyone in the world gets the vaccine.

“There’s no way that you can stop the risk that I have or that you have in New York or Los Angeles unless we stop the risk everywhere in the world,” Brilliant told “Marketplace Morning Report” host David Brancaccio.

The enormity of such an effort isn’t lost on Brilliant. It would require tens of millions of vaccinators, billions of dollars with years of follow-up efforts to vaccinate those were missed earlier and create rings of immunity around any possible resurgences. But at the end of the day, it’s a worthwhile investment.

“It’s the best investment in the world,” Brilliant said. “It took $150 million in 1965 dollars to eradicate smallpox from the planet, and every year, we get the benefit of billions of dollars of not having smallpox and not having those little yellow cards.”

Below is a edited transcript of Dr. Brilliant’s conversation with David Brancaccio on what the right COVID-19 vaccine program will need to truly be effective. This is part one of a two-part interview. You can read part two here.

David Brancaccio: You were there on the ground getting rid of smallpox. You had a vaccine then. It was the challenge of delivery. If we do get a vaccine here, can we pull off this challenge of getting it to people?

Larry Brilliant: Yes, I’m confident we can. Bear in mind it has to be a vaccination campaign in 220 countries at virtually the same time, coordinated. That means we’re looking at tens of millions of vaccinators, millions of vehicles carrying vaccine throughout the whole country. If you think about India or Africa, think Zimbabwe, and think of the jeeps or the trucks that will be carrying the vaccine, and the vaccinators and the coordination of that massive army, it will be the largest peacetime army ever assembled if we count all the countries.

Brancaccio: I mean, you see this as a global response, why? For reasons of fairness and equity?

Brilliant: Well, of course, that’s one of the reasons. But out of pure selfish reasons, here I am outside of San Francisco — there’s no way that you can stop the risk that I have or that you have in New York or Los Angeles unless we stop the risk everywhere in the world. This is a pandemic. The virus is constantly ping-ponging back and forth. It’s like whack-a-mole. You know, for a while we thought that South Korea and Singapore did great. New Zealand got reinfected. China’s been reinfected. Unless we conquer it everywhere, we’re not conquering it anywhere. It’s unfortunate with the rise of provincialism, I think we think very much about our own neighborhoods. A pandemic, a virus like this, cannot be stopped in one place. It has to be stopped everywhere.

Brancaccio: I mean, countries that paid big money to invest in a vaccine may want it for their people first. China has said things like that. I mean, at a political level, it makes sense for politicians to get it to their constituents first, but you’re saying it doesn’t make public health sense.

Brilliant: We may be required to vaccinate the people closest to us. That’s human nature. And there’s a wonderful committee of the National Academies of Sciences, Engineering and Medicine that Bill Foege and Helene Gayle are co-chairing on the equitable distribution of the vaccine. I’m not really talking about that as important as that is. I’m just speaking biologically. You can mass vaccinate everybody. That’ll take years. We have to vaccinate something like 6 billion people. So in the process of vaccinating everyone, new people are born, immigration goes so many different ways, you miss 20-30% of the people. Then you’ve got to go back, and you’ve got to find every case and draw a ring of immunity around it, just as we did in smallpox. It’s similar to what we’ve done in Ebola recently. That’s where the real campaign will take place, in addition to mass vaccination.

Brancaccio: You and I first talked about the threat of pandemic on PBS television 11 years ago. I just looked up the date in 2009. And I don’t want to romanticize, but that was a time when there was more of a global multilateral spirit. And just about everything you’ve been talking about here involves global coordination. We’re not very good at that these days, at least from the U.S. perspective. We have a tendency these days to go it alone.

Brilliant: You know, after the 1918 pandemic of swine flu, countries began to create new institutions in order to share public health innovations. After the Second World War, we created the United Nations and World Health Organization and Food and Agriculture Organization and the alphabet soup of acronyms that kind of kept us together. We are now experiencing a dissolution of those alliances and partnerships. I would think that a pandemic of all things would draw us closer together, and it may yet. Because we’re still in early days, I’m sorry to say. And people may think we’re having some episodic victories. But this virus will continue to go back and forth and reinfect us, until we finally figure out that we’re better off working together than we are working alone.

Brancaccio: Since you’ve seen it in action, fighting smallpox in South Asia and fighting polio, give us a more vivid picture of this. One imagines a load of vaccine being picked up at some production facility in an industrialized country, getting to an airport somewhere in the world, and then people line up for their shots. The reality on the ground is vastly more complicated.

Brilliant: It is. And the first step is, of course, to make the right vaccine: one that will work for a global program. And that would be a vaccine, one dose with a long period of immunity. Once you get that vaccine, you want it manufactured all over the world. The largest manufacturing facility for vaccines in the world is actually in Puna, India. And I think it’s something like two-thirds of all the children in the world have had a vaccine from that place. So we have good luck in decentralizing manufacturing if we are willing to share technology and share best practices. That eliminates the first hurdle. Once it gets into every country, then you’re really thinking about this army that I mentioned. You’re talking about hordes of Jeeps and buses and trains and airplanes and globally tens of millions of vaccinators. The polio eradication program in India had over 5 million people working in it. Even as long ago as the 1970s and 80s, we had 150,000 vaccinators just working on smallpox just in North India. These are vast programs and they’re so complex, that the idea that we would leave the World Health Organization in the middle of a pandemic, will turn out to be one of history’s gravest errors, I’m afraid.

Brancaccio: You know, [what’s] also necessary for this vast distribution program is money. I mean, even in the United States, there’s a question of that. Roy Blunt, the senator from Missouri, just wrote the CDC wanting more information about what their plans are for distribution. He wrote to the CDC [that] there will be no larger failure than if the government — our government, the U.S. government — is unable to distribute a safe and effective vaccine in a timely and equitable manner. And he was specifically worried in this letter about the administration earmarking enough money to get it done.

Brilliant: Oh, I’m so happy to hear that Sen. Blunt said that. It’s often the thing that’s left out — [it] is the cost of the logistics and of running the program. It’s the best investment in the world. It took $150 million in 1965 dollars to eradicate smallpox from the planet, and every year, we get the benefit of billions of dollars of not having smallpox and not having those little yellow cards. Polio [was] the same. As much as that’s cost us, it’s the greatest investment. A stitch in time saves 90 when you’re talking about vaccinations. So, yes, I think that the billions of dollars that it will take to vaccinate everyone and to find every case eventually and draw a ring of immunity around it and to stop transmission — I think that it will be well worth it. We’re already spending trillions of dollars in dealing with the after effects of this disease. Billions of dollars that get you trillions of dollars is a good investment for any investor.