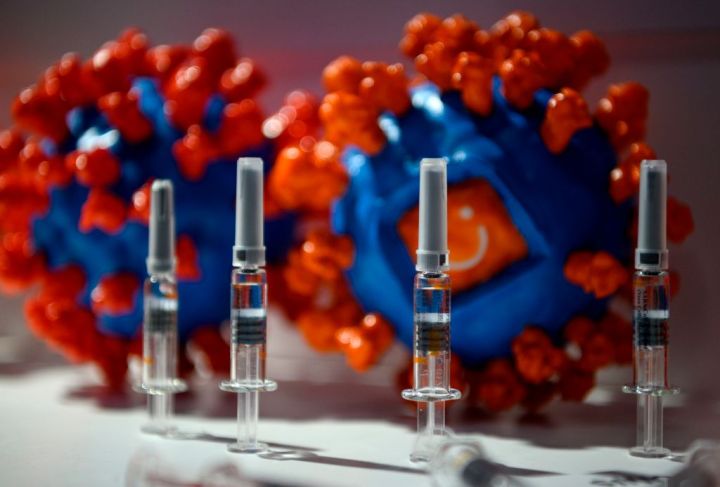 COPY
A Sinovac Biotech LTD vaccine candidate for COVID-19 coronavirus is seen on display at the China International Fair for Trade in Services in Beijing on Sept. 6, 2020. NOEL CELIS/AFP via Getty Images
COVID-19

A Sinovac Biotech LTD vaccine candidate for COVID-19 coronavirus is seen on display at the China International Fair for Trade in Services in Beijing on Sept. 6, 2020. NOEL CELIS/AFP via Getty Images
Listen Now

AstraZeneca stock is down in London after the news it has paused giving shots of its coronavirus vaccine candidate to test volunteers because one patient had an unexplained reaction.

Scientists say this is common in a drug trial, to give researchers time to understand what happened. Shares of companies making other vaccines are up;  Moderna was up 5% in pre-market trading. BioNTech was up 6.5%.

Making a COVID-19 vaccine is only part of the challenge. What’s also hard – giving it out. Some say it’s the biggest logistical undertaking in human history.

We will be covering this distribution challenge with regular coverage, starting today with “Marketplace Morning Report” host David Brancaccio’s interview with Dr. Nancy Kass, a professor of Bioethics and Public Health at Johns Hopkins and deputy director for Public Health in the Berman Institute of Bioethics.

This is part one of a two-part interview.

David Brancaccio: Let’s start with a term that I had not heard of before: vaccine nationalism. What does that mean? And why should we take account of this?

Nancy Kass: So, vaccine nationalism is a phrase that has come up in the context of COVID to mean that a particular country might want to make sure that all of its own people get vaccinated before the vaccine is shared with others. And, they may be able to have that kind of jurisdiction if they manufactured the vaccine, if they develop the vaccine, but essentially, it’s a way of saying, if it’s our vaccine, we want all of our people to have it first before anybody else in the world can have it.

Brancaccio: And I can see, as a matter of politics, that you might want to [look out for] America first in the case of the United States of America, but there’s an ethical problem with that?

Kass: Absolutely. And I want to say that I think it goes beyond politics. I think you’re absolutely right that there is a political angle here, but also our leaders are trying their best to serve their own constituents. And if their constituents are clamoring to be able to get the vaccine, they’re unemployed, they haven’t been able to send their kids to school, it’s understandable that they will want to be vaccinated. The challenge here is that this is an infectious disease. And so even if we weren’t concerned about equity for its own sake, it becomes an impractical strategy to say that everybody in the United States deserves to be vaccinated before the vaccine can be shared with anyone else.

Brancaccio: Because you vaccinate a substantial portion of America but then a plane flies in from somewhere that, where people didn’t get vaccinated, and you can have outbreaks, within the United States yet again.

Kass: Absolutely. Absolutely. Part of what is very likely to be true for a COVID vaccine is that it will be significantly effective, but not 100% effective. I believe that the threshold that they have published is that a vaccine has to be at least 50% effective. Meaning, that at least 50% of the people who get vaccinated will be protected either against getting COVID altogether or against getting a severe form of the disease. And once everybody is vaccinated, or almost everybody is vaccinated, that’s fine. But if it turns out, you have that kind of situation, where people get off the plane from somewhere else, then you’re sort of at risk of being back where you started.

Brancaccio: So a global response, but we’re talking at a moment when some of our global institutions are being questioned and international coordination has been in recent years more fraught. Do you think we’re up to the task of thinking globally?

Kass: Right. It is one of the most vexing questions because these are really challenging issues under the best of situations. It’s challenging to think about what counts as the appropriate, and equitable, and the most public health protective strategy for resource allocation, in this case vaccine allocation, even when everybody is cooperating well. And then you throw into the mix, that there is distrust among certain nations, that we live in a country where there have been disparaging comments about the World Health Organization, whose job it has been to do this. And we really find ourselves in an even more challenging situation. I will say, that there is a group convened by the WHO, the World Health Organization, who has been assigned this task of thinking about what equitable allocation means in the context of a COVID vaccine, and they are working hard and they will soon put forth some recommendations. What will be key is setting up institutional levers whether, it has to do with with payment or other kinds of things that help ensure that it’s not simply a set of guidelines, but that there is some teeth behind it.

Brancaccio: In the event that these officials can figure out the equitable way to get enough coronavirus vaccine to India to Brazil to Argentina and beyond, in the United States, we have to figure out who might get the vaccine earlier and who might get it later. How do we start thinking about that? I mean, first responders, certainly?

Kass: There are a few groups that have been thinking already about equitable allocation of COVID vaccines and with slight variations among their plans, most of them put high priority on two groups. One is the group of people, usually health care workers, whose job directly relates to mitigating COVID, taking care of the people who are sick with COVID, leading some of the public health response, etc. And then there are the people who helped maintain our societal functions in the context of a pandemic. It’s the grocery workers, it’s the delivery people, it’s the meat packers.

And I want to add to that list, it’s the teachers. One of the most catastrophic consequences of our current situation is the K through 12 kids who are not able to go to school. As everybody is trying their best with zoom education, we all know that it’s not the same. And it’s not the same for education. There’s so much data about summer learning loss under normal conditions, and it’s hard to imagine what kind of learning loss there will be under this. School is also such an essential place for kids to be able to get additional health care, mental health care, physical therapy, food distribution. Schools become the hub for child welfare in so many ways. So, for both of those groups, we both owe it to them because they’re taking on these high risk situations, in contact with so many people in the worst pandemic of our lifetimes, but also from a public health perspective, where we want to prevent spread to others. They are vectors because they come into touch with so many people. So there is instrumental value, as well as a direct responsibility to them that argues for both of those groups.

The next group who become very important, and in my mind, then become the second group are people who themselves, because of their pre-existing health conditions, are really at high risk for the most severe complications of COVID. And we’ve all started to see who those people are. It’s generally people who are in the later years of their lives. It is often people with multiple other health conditions, and some of that tracks with racial and ethnic minorities, which just adds another layer to this. So, while it is not true that all older people or all minority people are at highest risk, it is becoming clear that people who who can check several boxes at once are clearly statistically and epidemiologically at highest risk for hospitalization from COVID and at highest risk for never leaving the hospital. We’re trying to prevent spread and we’re trying to prevent death.