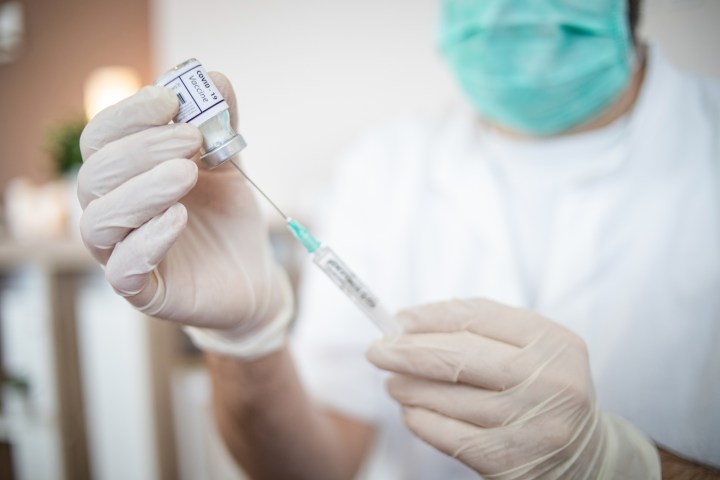 COVID-19 vaccine boosters are slowly but methodically becoming another part of the U.S. pandemic response.

The Centers for Disease Control recently approved use for people aged 65 and older and for immunocompromised adults. It’s likely boosters will be approved for wide use in the months to come.

But in order to continue suppression of COVID-19 and any dangerous variants like Delta, the work to create a better vaccine that can be made and delivered to every corner of the world must continue, says Dr. Larry Brilliant, the epidemiologist who helped eradicate smallpox.

“I’d really like to see more innovation in the vaccines that are easier to manufacture globally, because it’s a legitimate concern that mRNA vaccines are complicated to export the manufacturing technology,” Brilliant told “Morning Report” host David Brancaccio.

Below is an edited transcript of their conversation on what kind of vaccines should be created down the road, means of addressing global vaccination equality and why we shouldn’t be worried about COVID being a “forever virus.”

David Brancaccio: Larry, you worry a lot about developed countries hogging COVID vaccine and poor countries left unvaccinated. Some global health experts thought, right, maybe the US should hold off on the boosters but not you?

Larry Brilliant: You know, there’s this old expression about how a big steamship can’t see the little rowboats in front of it, and it isn’t that they’re harming on purpose. We’re not hogging the vaccine on purpose. It’s that this vaccine, the mRNA vaccine, should have been considered a three-dose regimen to begin with. But the kind of unilateral way in which we announced a third dose, it immediately increased the global demand for vaccine by 50%. If it had been 15 billion doses before, it’s all of a sudden 22 billion. If it had been 20 billion doses before, all of a sudden, it’s 30 billion, so that abruptness, I think, really rankled the world. And I think what Tedros [Adhanom], the wonderful head of [the World Health Organization] was saying was that, of course, it’s right to vaccinate and give boosters to those who need it, these would be people over 65 who are immunocompromised, haven’t had their original vaccine for eight or 10 months.

But to do it as a mass vaccination campaign, vaccinate 200 million more Americans with a third dose, when 100 countries in the world haven’t had a first dose, it’s not just the equity issue, David, it’s that by doing that, we will be inadvertently creating places that harbor the virus and will create more and more variants that are inevitably going to boomerang back here.

Brancaccio: Yeah, I was just looking at the latest data, from late this month, it showed about 37% of the global population has been fully vaccinated. But only 3% of people in low-income countries have been vaccinated. I mean, it’s just striking.

Brilliant: When you say 37% of the world is vaccinated, it gives people even the view of one out of every three. But of course, it’s so highly skewed when you’ve got so many people now in the U.S. that have had three doses. Actually, there’s some good news. We’re now manufacturing a billion doses of various vaccines every month, there have been well over 6 billion doses put in people’s arms. The problem is it’s a global pandemic. And if you think about where did the variants come from — one from South Africa, one from Brazil, one from India, one from the UK — the variants will arrive from a lot of different places in the world, and they will predominantly arrive from places that have hot outbreaks. And hot outbreaks will invariably arrive from places that have low vaccination coverage. So it’s in our best interest that we get a uniform covering of vaccine everywhere. And having worked in the smallpox campaign and the polio campaign, I know it’s really damn hard to get vaccines to the final mile. But if we don’t get the vaccine to the final mile, we will be receiving back, from the final mile, importations of new and more dangerous variants, and potentially some that will elude our current vaccines. It’s in our best interest to think of a global pandemic as global.

Brancaccio: So it’s in money and resources and dedication, but also there’s an innovation issue here. Some see the present vaccines, the ones we have already, as miracles, yet you wouldn’t mind seeing newer vaccines that might be developed that would be easier to get down that last mile to villages in any part of the world?

Brilliant: Is it greedy to ask for a second or third miracle? We need a vaccine that doesn’t require injection, we need a vaccine that doesn’t require cold storage. It’d be great to get a vaccine that gives us mucosal immunity, so that people don’t get the disease in the first place. Of the 130 vaccines currently in the pipeline, even in phase three trials, only two of them are inhalable, inner-nasal vaccines. I’d like to see more of those. I’d like to see vaccines that have what we call “PEP” — post exposure prophylaxis — so you can give the vaccine even while someone is incubating the disease and prevent that disease to go on to be a serious disease, but also prevent that person from shedding the disease. I’d really like to see more innovation in vaccines that are easier to manufacture globally, because it’s a legitimate concern that mRNA vaccines’ manufacturing technology is complicated to export. I would say this: You know, I’ve been the beneficiary of Silicon Valley’s entrepreneurial spirit. I’d love to see Moderna and Pfizer make more money exporting vaccination manufacturing facilities than they make manufacturing vaccine. Because unless we do that, we’re not going to get their full-hearted, full-throated support.

Brilliant: I think so. I think there’s no reason we can’t get that kind of a miracle, as well.

Brancaccio: What’s that take? I mean, it’s not just time and luck, it’s money to get that innovation fully focused?

Brilliant: Oh, I think there’s money for proximate manufacturing facilities for vaccination in the middle of a pandemic. We’ve got a bottleneck of production for the mRNA vaccines and some of the vaccine companies are choosing to sell their wares to the highest bidder. And that’s what the market economy creates. But we can use the market economy instead of fighting against it and make it possible for these companies to be in the business of franchising, as opposed to just kind of pondering through with one or two facilities.

Brancaccio: Who would shape that discussion? I mean, you get the industry groups together, but would it be under the auspices of the World Health Organization, or something?

Brilliant: Well, I would look at COVAX, which is the organization that’s created to do that, I’d look at CEPI, a kind of consortium of WHO, and the Wellcome Trust, and Gates Foundation and several others, who are trying to get ahead of the next pandemic by creating multiple vaccines that would defeat a newly emerging disease before it emerges. And I’d certainly look at GAVI, which is Seth Berkley’s wonderful organization that is the largest buyer of vaccines all over the world. And they sort of buy the vaccine at a dollar and sell it at 10 cents, with the delta being underwritten by philanthropy in order to do exactly what we’re talking about right now, make the world safer by providing a uniform coverage of enough vaccine, that the diseases that they cover are widely protected against.

Brancaccio: Now, Larry, you worked on that piece, you were the lead author, the one in Foreign Affairs over the summer that referred to this whole thing as the “Forever Virus.” In the U.S., what do you think has to be the focus, now, so that our lives and the economy get more normalized — if indeed there’s no way to once and for all totally stamp out this thing?

Brilliant: Well, this particular virus, SARS-CoV-2, is a forever virus, but it doesn’t mean that it is a virus that is forever on the top of every cable news outbreak in, you know, 20-point type. It doesn’t mean it’s forever taking the oxygen, not just out of people’s lungs, but out of the conversation. It doesn’t mean that it stops us from going out and living normal lives. Yellow fever is a forever virus, measles is a forever virus, but we control them by vaccination. And smallpox was a forever virus, going all the way back down to Ramses V, until we eradicated it. We can live with forever viruses, and we do. But we have to be careful how we produce vaccines and how we distribute them. And in the United States right now all the signs are good, almost every state, except perhaps the Dakotas and Idaho and parts of Minnesota, is trending well, but we are going into the flu season. We’re going into a colder time when people go indoors and can transmit the disease more rapidly. History hasn’t shown that the Thanksgiving, Christmas, New Year’s cadence has been favorable. So we have to be very careful. We still have to keep our guard up. But I am optimistic that the combination of the Trump administration’s rapid making of vaccine and the Biden administration’s even better distribution of the vaccine puts us in a much better place than we were two years ago or a year ago.

Brancaccio: Would you say there has to be more focus, once it’s safe and everything’s approved, on vaccinating the youngest among us?

Brilliant: Yeah, there’s probably about 70 million Americans, adults, who have not been vaccinated yet. And there’s probably almost half that many children who have not been vaccinated. That’s a very large number if you put those together, that’s more than enough to keep an epidemic going in the United States. So we have to do both. We have to focus on the unvaccinated children and adults. I think there’s a pent-up demand for vaccinating children because it’ll mean that we can finally have schools safe and we won’t have to choose between sending kids to school or sending them to school safely. But that also leaves just under a third of American adults who don’t want to get the vaccine. And the mandates — you know, you have to get vaccinated to fly a plane, you have to get vaccinated at many of the places you work — they’re beginning to have their effect, but they also have an anti-mandate effect. But I’m confident that, the United States, we will get there.