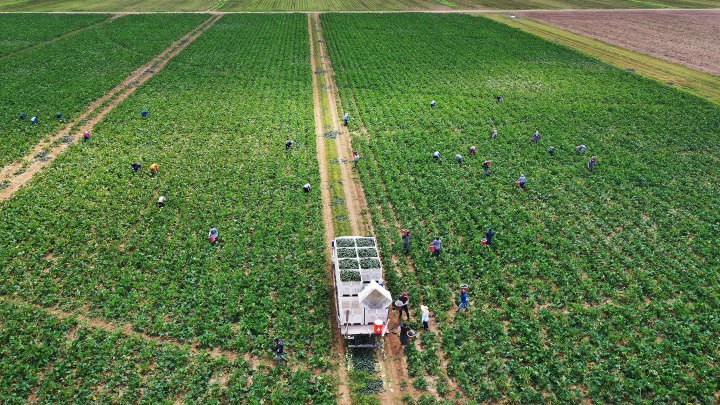 COPY
Workers harvest zucchini on a farm in Florida City, Florida, in April. Climate change is shifting which crops farmers can grow — and when they can grow them. Joe Raedle/Getty Images

Workers harvest zucchini on a farm in Florida City, Florida, in April. Climate change is shifting which crops farmers can grow — and when they can grow them. Joe Raedle/Getty Images
Listen Now

Climate change has become more and more real for Americans over the past few decades. Sea level rise has been a problem on the East Coast, wildfires have been getting more intense on the West Coast. And weather in the Midwest and South has been getting more extreme. This has major implications for American agriculture.

It’s harvest season, and Don Cameron is out in his field in Fresno, California. His mechanical tomato harvester is moving its way along, picking up to 50 tons of tomatoes per hour.

“The tomatoes though have had a tougher time during the summer when we have continuous days of temperatures over 110 degrees, and the blossoms tend to fall off,” Cameron said. “Just one of the many crops we grow here that’s being affected by changes in our climate.”

Cameron’s almonds and pistachios bloomed erratically this year because the winter was too warm. His peppers got sunburned. And then came the wildfires.

“The smoke we had for over 30 days cut down on the sunlight we had, and our grapes essentially quit making sugar,” he said.

Climate change has arrived in American agriculture. Agricultural researchers have modeled the impacts of climate change on barley, rice, wheat, soy, cotton and corn over the next 30 to 50 years.

“Without any changes in what farmers are currently planting, the total profits across the six major crops we looked at in the United States would drop by about 30%,” said James Rising, a research fellow at the London School of Economics and Political Science’s Grantham Research Institute on Climate Change and the Environment. His work was published in Nature Communications.

“All across the U.S., most counties by 50 years from now are going to have to be planting something different from what they’re currently planting, according to our projections,” he said.

But switching is expensive; a lot of crops need specialized harvesting and planting machines, processing equipment and supply networks — not to mention decades of accumulated farmer expertise.

“It’s very hard to make substantial changes to your farm and your cropping system when you’re just hanging on year to year,” said Ben Lilliston, director of rural strategies and climate change at the Institute for Agriculture and Trade Policy. He said some farmers will need financial help to make changes.

“Agriculture policy is way behind,” Lilliston said. “Our farm bill was just passed in 2018 and had no mention of climate change at all within it. None.”

And yet, farmers are already adapting, and you can see it on the map.

The corn belt has shifted north

“You have over the last several decades seen the corn belt shift north,” Lilliston said. “There are parts of Minnesota, for example, where corn is grown where it was more traditionally wheat.”

Still, straight up switching crops is not very common. More often, farmers and suppliers are adapting in less drastic ways.

“When I was growing up farming with my father back in the ’60s and ’70s, we planted our crops anywhere from the first of May to the end of June,” said Fred Yoder, who grows corn, soybeans and wheat in western Ohio. “Today, we’re planting a lot of our crops by mid-April, trying to beat that heat in the summer time.”

In addition to planting earlier, Yoder said farmers in his area are planting cover crops to help retain moisture between wild swings of flooding and drought. And he puts a lot of faith in the development of plants that can survive changing conditions.

Of course, the changes in climate are different depending on what part of the country you’re in.

A focus on dry farming

“In the Pacific Northwest, we’re expecting much warmer summers and then a lot of precipitation to make up for that,” said Jennifer Halofsky, the director of the Northwest Climate Hub at the U.S. Department of Agriculture, part of a network that provides advice to farmers. “A big focus is dry farming techniques to grow crops that don’t need as much irrigation.”

Still, some farmers have been reluctant to characterize challenges with weather as being related to climate change.

“Climate change is a very politically almost toxic term in a lot of parts of rural America because it’s become a partisan issue, and I think I see that shifting over the last several years,” Lilliston said.

Extreme events — flooding, drought, the August derecho — are galvanizing some farmers to look ahead.

According to models, in 50 years, 7% of cropland for the U.S.’ main commodity crops won’t be profitable at all.