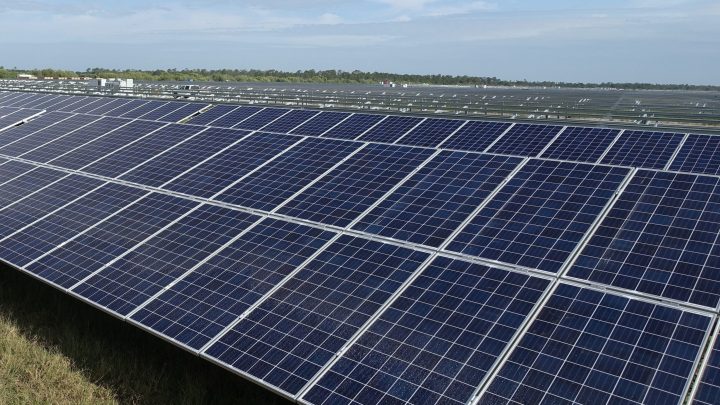 A view of a solar farm under construction in Punta Gorda, Florida. Kerry Sheridan/AFP via Getty Images

A view of a solar farm under construction in Punta Gorda, Florida. Kerry Sheridan/AFP via Getty Images

Climate change has fueled natural disasters around the country, with wildfires ravaging the West Coast and increasingly more powerful hurricanes touching down on the Gulf Coast. But how much are politicians willing to spend combating it?

One proposal in particular that’s been the subject of scrutiny by Republicans is the Green New Deal. The ambitious plan aims to reduce greenhouse gas emissions, add millions of new jobs and provide universal health care, among other goals. It was put forth as a resolution in 2019 by Democratic House Rep. Alexandria Ocasio-Cortez of New York and Democratic Sen. Ed Markey of Massachusetts. In the past, Ocasio-Cortez has put the price tag for her proposal at $10 trillion.

But during the presidential debates last week, President Donald Trump claimed that the Green New Deal would cost $100 trillion — a figure refuted by climate experts and think tanks. And during Wednesday’s debates, Vice President Mike Pence criticized Biden’s climate plans, stating that “We don’t need a $2 trillion Green New Deal.” (Biden’s climate proposal is, however, not the GND and is far less sweeping. It doesn’t include, for example, universal health care.)

The amount Trump cited was generously rounded up from a calculation done by the American Action Forum, a conservative group that estimated the deal’s price tag could reach between $51 trillion and $93 trillion based on health care, food security and green housing costs.

However, Kira McDonald — a senior fellow at Data for Progress — said attaching any cost estimate to the Green New Deal “should be taken with several grains of salt and in most cases add up to deliberate obfuscation.”

And James Goodwin, a senior policy analyst with the Center for Progressive Reform, said that one of the flaws with the American Action Forum’s estimate is that it didn’t take into account the benefits. While there’s a cost to spending more money on, say, clean energy, that also buys electricity, better public health outcomes and a sustainable climate.

A 2017 report from the Government Accountability Office found that climate change has already cost U.S. taxpayers $350 billion over the past decade, which includes disaster assistance from flooding and storms.

“The fundamental tenet, you could say, of the Green New Deal is to challenge the common notion that there’s this inherent tension between cleaning up the environment on one hand, and promoting a strong economy on the other,” Goodwin said.

He said you can’t put a clear price tag on the proposal because it’s more of a vision. Like Goodwin, McDonald also said it’s more fair to think of the GND as a brand or strategy.

Amy Sinden, a professor at Temple Law School, said the cost of not doing the Green New Deal, or a similarly large-scale effort to combat the climate crisis, would be catastrophic.

“It’s like saying we shouldn’t spend money to fend off an asteroid that’s barreling toward earth threatening to destroy the planet because it’s too expensive,” she said.

Since the original document for the GND came out, more detailed plans have been released. McDonald worked on estimates for a bill called the Green New Deal for Public Housing, which was introduced by Ocasio-Cortez and Democratic Sen. Bernie Sanders of Vermont.

Data for Progress found that spending up to $172 billion over 10 years would create roughly 241,000 jobs across the country, reduce annual carbon emissions and reduce public housing energy bills, among other benefits. That money is roughly the same amount the government spent to bail out American International Group, the finance and insurance corporation, during the Great Recession.

David Keiser, an associate professor of resource economics at the University of Massachusetts, has studied the cost and benefit estimates of federal environmental policies such as the Clean Water Act and the Clean Water Rule.

The Clean Water Act is aimed at improving surface waters, which Keiser said might lead to improved recreational opportunities and improved amenities. But he noted that oftentimes, benefits like these are difficult to measure because they might affect things that aren’t bought and sold in markets.

“You’re not necessarily walking down the street and buying an opportunity to recreate in a clean lake or a river,” he explained. “So oftentimes economists use a variety of different methods to try to recover the implicit values of those things.”

Those methods might include observations of actual human behavior, and what those actions reveal about how much people value something.

U.S. federal agencies, with some exceptions, have to calculate the cost and benefits of “economically significant” regulations they issue (those that have an annual effect on the economy of $100 million or more) under an executive order signed by President Bill Clinton.

Clinton’s order is built off a 1981 rule issued by President Ronald Reagan, who called for the benefits of a regulation to outweigh the potential costs to society. Opponents at the time viewed the requirement as an attempt to assign values to things that are unquantifiable and deregulate business and industry.

Although President Clinton’s rule had similar requirements, one difference is that it calls for the benefits of a regulation to “justify” the costs, not “outweigh” it.

Paula Worthington, a senior lecturer at the University of Chicago, said the implementation of Clinton’s rule is when the U.S. started to develop a regular set of processes and protocols around cost-benefit analysis.

Worthington said that a cost-benefit analysis can provide a structured way of looking at the impacts of a proposal, although it doesn’t give you the answer.

“You don’t say at the end, ‘Well, clearly the benefits outweigh the costs, so let’s do it, or the other way around,” she said “Well-done, high-quality cost benefit analyses are closer to science, than to magic and poetry. But they still contain a lot of elements, where the analyst makes choices about what to consider and what not to consider. The most important thing when you’re producing a cost-benefit analysis is to be transparent and clear about your assumptions and your choices.”

Goodwin, a critic of cost-benefit analysis, wrote that it ends up favoring “industry interests to the exclusion of public protections.” This methodology, he argues, is a major roadblock for programs like the Green New Deal.

In June, the Environmental Protection Agency released a proposal of how major clean air rules are written by changing the way costs and benefits are analyzed. The proposal would focus only on the economic impact of a rule without taking into account possible benefits like public health.