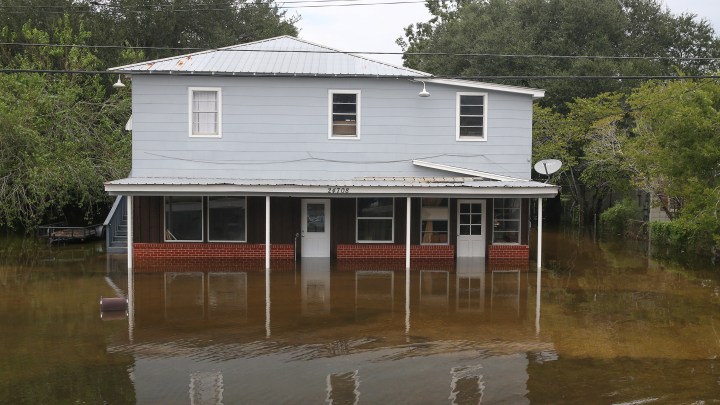 In late June, the nonprofit research organization First Street Foundation rolled out a national flood risk database, which assesses the likelihood of a flood hitting millions of real estate properties across the U.S.

Now that flood risk factor is available as a risk index rating on Realtor.com. The flood factor is based on a 1 to 10 scale, with 10 being the highest likelihood that water will flood the property.

It’s an important risk factor to include in a potential home purchase, said First Street Foundation founder and Executive Director Matthew Eby. That’s particularly the case because we may be collectively underestimating flood risk on a national level as the existing information collected by the Federal Emergency Management Agency, or FEMA, doesn’t account for the length of time required to pay off your mortgage.

“What it doesn’t necessarily do is look into the future and incorporate how risks are changing over time based on a changing environment,” Eby told “Marketplace Morning Report” host Sabri Ben-Achour. “If you’re just looking at risk today and using that FEMA zone, then you may in fact be underestimating risk because you’re not thinking about the full homeownership period and taking that into account to make decisions.”

The following is an edited transcript of Eby’s conversation with Ben-Achour.

Sabri Ben-Achour: Are homeowners, do you think, underestimating flood risk?

Matthew Eby: Well, in the traditional sense of how homeowners looked at flood risk, you typically would look for your Federal Emergency Management Agency flood zone, and your FEMA flood zone is a determination of whether you’re in a one in 100 year flood risk or greater in an area. But what it doesn’t necessarily do is look into the future and incorporate how risks are changing over time based on a changing environment. So if you’re just looking at risk today and using that FEMA zone, then you may in fact be underestimating risk because you’re not thinking about the full homeownership period and taking that into account to make decisions.

Ben-Achour: You estimate that around 10% of properties in the U.S. are at substantial risk for flooding. Fourteen million properties, that is more than what FEMA suggests. Why is your estimate so much higher?

Eby: Well, one of the main drivers of that is the unmapped area. So there are portions of the country that are just not mapped by FEMA. So they look at individual areas that are high-population and high-risk and tend to focus on those areas with their budget and what Congress allows them to actually do. What we’ve done is mapped the entire contiguous United States, so that it incorporates every single area. So that’s one of the main drivers. And then the other is that we actually map pluvial flooding, as it’s called, or precipitation flooding as an individual risk, which isn’t done through the FEMA methodology. So if you have a high area of precipitation risk, we capture that in our model and are able to show that as well.

Ben-Achour: Your models are forward-looking, and we know that temperature is rising and sea levels are rising. How much is flood risk rising?

Eby: Well, if you baseline on the current climate, as you mentioned, there’s 14.6 million properties that have substantial flood risks, that 1% or greater. If you look over a 30-year period and how that changes, that number goes from 14.6 million to 16.2 million or including another 1.6 million properties. So if you look at risk in certain areas, you see substantial increases. And if you look at, for instance, Florida, and if you look at other areas in the middle of America, you actually see some places are getting drier, and risks are going down.

Ben-Achour: What areas of the country are at highest risk of flooding or will see the greatest increases in flood risk?

Eby: One of the main areas that we’ll see the biggest increase in flooding over the next 30 years is Florida. I mean, when you think of Florida, you generally think of flood risk, but today’s flood risk is defined as 20% of homes that are in that 1% or greater flood risk area. And in 30 years that number actually grows to one in four homes or 25% of all properties in the state.

Ben-Achour: What should homeowners do with this information? I mean, just be more wary of buying certain properties or get more flood insurance?

Eby: Well, I like to think of it as similar to getting a medical diagnosis. If you have something that’s at risk or something wrong with you, you want to know what that is so you can take preventative measures or take action of some manner. It’s a very similar thing with flood risk. If you didn’t know that you had flood risk up into this point, but now you’re armed with that information, you can either buy flood insurance, you can work on adaptation to prevent that flooding from actually taking place. You can work with your neighborhood if there’s neighborhood risk, to work with your local government to actually get solutions put in place, but overall it is, it is, action — you need to do something now that you know that you have this risk. So arming people with this information, the hope is, now that they have it, they’re able to make much more informed decisions and protect what is for the vast majority of Americans their most valuable asset.