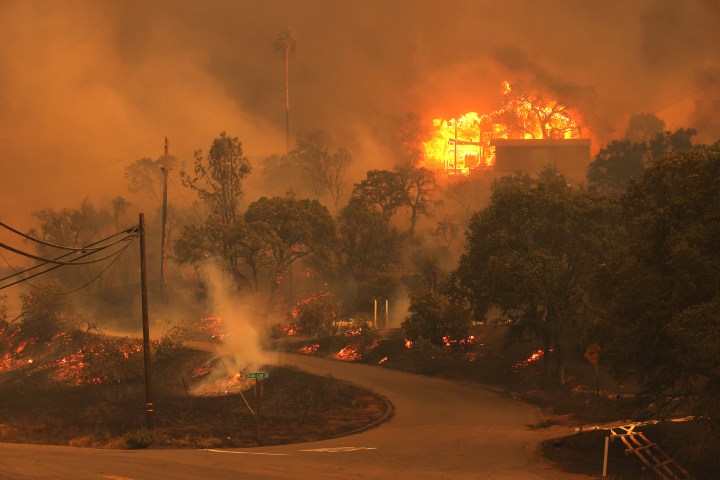 There was a moment in 2016, just after putting an offer on a house in the Oakland Hills in California, that Jamye Alexandra wondered if it was a mistake. Not because of the house itself, or the location, but because the insurance company the previous owners had been with for years said they would not keep insuring the property. There were too many trees, they said. Too much risk of wildfire. That made her pause.

“I was pretty nervous,” she said. “But since we were able to find a couple other insurance partners who were willing to do it, I wasn’t too worried.”

They went ahead and bought the house.

The next year, 2017, was one of the worst fire years in California history. Over a million and a half acres burned, and more than 10,000 structures were damaged or destroyed, more than in the previous 9 years combined. None of the fires were in Oakland, but even so, the following year, Alexandra and her husband got a notice from their insurance company: they were not renewing their policy. After that, the only option their broker could find them on the traditional market was nearly $13,000 a year — almost four times what they had been paying.

“That was really crazy and was really scary,” Alexandra said. “Basically what my broker said is that this is happening to most of his clients… and he’s like, it’s funny, because a lot of these people have had their insurance for 20 years and they haven’t made claims, and yet they’re getting dropped.”

As the climate changes, and wildfires get bigger and more destructive across California, it is getting harder and more expensive for many homeowners to get insurance, particularly in areas deemed high fire-risk. The same thing is happening in other states that are bearing the brunt of climate change, in parts of Florida, Louisiana, Mississippi and Texas that have been hit hard by hurricanes in recent years.

“Affordability of home insurance in the face of climate change has become a huge issue in many states,” said Amy Bach, executive director of the nonprofit United Policyholders. “Home insurance now is costing more in areas that are vulnerable to climate change, is harder to find, and is worth less.”

It is also getting harder to keep. In California, the number of homeowners who got a non-renewal notice from their insurance company rose 6% between 2017 and 2018. In areas that were directly affected by wildfires between 2015 and 2018, that number jumped by 10% — and that was before the Camp Fire, the most destructive fire in California history, which burned down most of the town of Paradise in November 2018.

When homeowners get a non-renewal notice from their insurance company, they often find their only options for replacement coverage are double, triple, even quadruple what they had been paying — either from unregulated surplus lines of insurance, or from the state’s insurer of last resort, the California FAIR plan.

That’s what happened to Pam Hewes last summer after she got a non-renewal notice from her insurance company for her house in rural Calaveras County.

“We are unable to renew coverage due to wildfire or brushfire exposure, including one or more of the following conditions at or near your property,” it read. “Close proximity to flammable vegetation; steep slopes that may increase the speed and intensity of wildfire; and/or limited access and/or dead-end roads that may impede firefighting equipment.”

It was the second time she’d been dropped by an insurance company in five or six years.

“I called my insurance broker and she said, ‘you know what, you’re stuck with California FAIR,’ because nobody’s insuring in the area we’re in,” said Hewes, 71, who’s been living in the same house in Arnold since the late 1970s. Her insurance is now $2,000 a year, double what she had been paying before — and it covers less.

“The insurance industry recognizes that the frequency and severity of natural disasters has increased dramatically in the past few years, and they’re pricing their policies to reflect that risk,” said Michael Barry, of the nonprofit Insurance Information Institute. “They’re in the business of selling insurance, so they want to get new customers, they want to underwrite properties. At the same time, they have to make an assessment as to what’s the correct price for this policy.”

Insuring against disaster has always been a complicated calculus, but it is becoming even more so as the planet warms, and storms and wildfires become more frequent and severe. In 2017 and 2018, insurers paid out almost $25 billion in claims. After the Camp Fire, the losses in Paradise alone were so high that they put one small insurance company, Merced Property & Casualty Co., out of business. Already this year, with at least three months left to go in fire season, more than 1.6 million acres have burned across the state.

“The 2017 and 2018 fires wiped out more than double three decades of profits. It wiped out those profits twice over,” said Carolyn Kousky, executive director of the Wharton Risk Center at the University of Pennsylvania. “If, in just a couple seasons, you’re paying losses that are basically 30 years worth of profit, you can see how that becomes quickly not financially sustainable for these firms, and hence why I think they’re getting increasingly concerned about their ability to write coverage there.”

Many homeowners in California are becoming increasingly concerned about being able to get quality, affordable insurance. Every time she goes on her local Nextdoor listserv in Oakland, Alexandra said, “there’s literally always a post saying, hey, we just lost our insurance, or our insurance more than doubled, or different things like that.”

About 98% of Californians are still able to get homeowners insurance through the traditional market, according to the industry, but in the counties that have the most homes in areas considered to be high or very high wildfire-risk, the number of people on the higher-cost California FAIR plan grew 177% between 2015 and 2018. The number of people buying similarly high-cost surplus policies also grew nearly 50% over that same period.

“We’re starting to see indications that there is stress in these markets,” Kousky said. “And we’re going to get to these tipping points where it’s just going to be beyond what some homeowners can afford.”

In some places, that tipping point has already arrived. In California’s highest-risk counties, the wildland urban interface areas, many residents are older, retired, living on fixed incomes — incomes that are being strained as insurance premiums rise.

“That is a classic wildfire victim, the 60 to 90 year old living on Social Security or retirement savings,” Bach said. “All their assets are tied up in their house, and they don’t have the budget to go from $1,000-a-year expense to a $4,000-a-year expense.”

For Pam Hewes, the extra $1,000 a year she now has to pay to insure her home is “really significant,” she said. “I’m retirement age, but I did not retire, thank goodness, because I’m still working and getting Social Security both, so I have a little cushion.”

She had planned to retire last summer. Then her husband died, right around the same time she got that non-renewal notice from her insurance company.

“If I had retired last year in July when I planned to, and then my husband died, and there was no income from him, I don’t know what I would do,” she said. “I’m trying to save as much as I can now for the future, because I don’t see it going down.”

Jamye Alexandra is worried, too, about what the future looks like — and what it could cost. She and her husband were ultimately able to get homeowners insurance, through California FAIR, for about $5,500 — nearly double what they had been paying before they got dropped, but well below the $13,000 quote they got on the traditional market. But the experience has made her wary.

“I guess they could just keep raising the prices,” she said. “If you’re having to pay $20,000 or something in the future on fire insurance, it kind of makes living here not something that you could do in the long-term.”

When she and her husband bought their house in Oakland, after years of saving, they thought it was where they would live forever.

“It’s really beautiful. We have all these trees, and you’re so close to town… but at the same time, when you’re at the house you feel like you’re in the woods. And it’s awesome, we love it,” Alexandra said. “But now I’m not so sure. Because of the insurance and just all the fires, I just am doubting how much we should be living in California.”