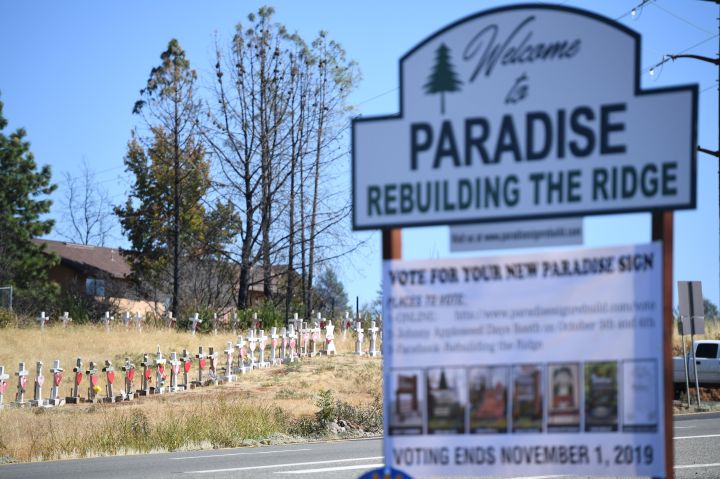 COPY
Crosses line the road to remember the 86 people who died as a result of the Camp Fire in Paradise, California. Robyn Beck/AFP via Getty Images
Check Your Balance ™️

Crosses line the road to remember the 86 people who died as a result of the Camp Fire in Paradise, California. Robyn Beck/AFP via Getty Images
Listen Now

On hold. One year later, that’s how life feels for thousands of survivors of the Camp Fire, the deadliest and most destructive wildfire in California history.

Given the massive scale of what was lost last November, in Paradise and beyond, there are thousands of people who still need serious financial help to put their lives back together. But getting that help takes a long time, and requires a lot of paperwork. It also requires staying on top of deadlines.

The most important of those deadlines — for people to file claims against Pacific Gas & Electric, PG&E — just passed, at the end of October. By some estimates, tens of thousands of people who likely had valid claims did not file in time. That includes people who survived not just the Camp Fire, but a number of other recent fires in Northern California also sparked by PG&E equipment.

That so many people who survived the wildfires would miss a critical filing deadline did not surprise Debra Lucero at all. She’s on the Board of Supervisors for Butte County, which includes Paradise.

“You’re talking about people who were very traumatized,” she said. “You have that going on on top of their living situation. They still may be in a temporary situation, we still have people housed in [Federal Emergency Management Agency] trailers. The whole system is just, I think, overwhelming.”

People also have a lot of misconceptions about who is allowed to sue the utility.

Then there are those who think that because PG&E filed for bankruptcy the company has no money, that it’s not worth suing. None of those things is true.

Because so many people with valid claims missed the Oct. 21 deadline, a group of lawyers representing wildfire victims asked a judge to extend it, something PG&E said it will agree to. The judge is set to rule on Nov. 13, but the expectation among those who have been working closely on this issue is that an extension will almost certainly be granted, likely through the end of December.

If that happens, Danko said, this is the message he wants people to get:

“Very simply, if you have a claim, your claim will be lost if you don’t file a piece of paper. And you can file this piece of paper yourself, if you want, or you can have a lawyer do it for you.”

Either way, he said, filing that piece of paper, called a Proof of Claim, “gets you into the game.” So that later, once PG&E has come through bankruptcy proceedings, and once a fund — likely in the billions of dollars — has been established, you are eligible to sue that fund for damages.

Even those who have valid claims, file in time, and do everything they need to do when they need to do it, likely won’t see a dime from the PG&E settlement for another year, lawyers estimate. Two full years after the Camp Fire.

For those who have urgent needs in the meantime — and there are a lot of people who do, Lucero said — there is another fund that is paying out smaller claims now. The deadline to file with that fund is coming up, on Nov. 15.

The $105 million Wildfire Assistance Program, established by the bankruptcy court with money from PG&E, was designed primarily to meet “basic unmet needs,” ones not already covered by FEMA. Things like the cost of food, water, prescriptions, diapers, medical equipment, gas, “anything that’s beyond what FEMA would have covered in the days immediately following the disaster,” said Tiffany Norwood, a program manager with the fund. “As well as to address any mental anguish or emotional distress resulting from the 2017 or 2018 wildfires.”

While $105 million sounds like a lot, “keeping in mind there are easily more than 100,000 victims,” Danko said, “it’s really not anything that’s significant, in my view, at all.”

The cap for basic unmet needs for renters is $2,500 per adult. For homeowners, it’s $5,000. Some people may be eligible for more — for “supplemental unmet needs” — but only once all the basic unmet needs claims have been paid out, if there’s any money left over.

From his clients who’ve filed, Danko said, “the reports that we’re getting back, for some folks is, I don’t know why I bothered.”

The Wildfire Assistance Program, is “not intended to cover all total losses for an individual or a household,” Norwood said. “It’s intended to meet those immediate unmet needs.”

Though she’s grateful the fund exists, Lucero said, a few thousand dollars per person is nothing, even to meet those immediate and most basic of needs.

“This is part of the issue, it’s just not enough money. And what we’re finding in the county is that we have so many basic unmet needs. People don’t have enough food. They don’t have shelter. They don’t have water,” she said. “So you can imagine if they don’t even have those needs met, it’s highly unlikely they’re trying to fill out some form online to maybe get some money. I think it sounds a little overwhelming.”

No end in sight

So much is overwhelming, still, even for survivors like Joseph Earley who, relatively speaking, is one of the luckier ones.

His family — his wife and son, mother and stepfather — all made it out of Paradise alive on this day last year. So did his friends. He doesn’t have the terrifying memories that a lot of people do, of being trapped in a car, unbearable heat and flames all around, on a gridlocked road, not knowing if he would make it out alive. He can afford a place to live, even if it feels nothing like home. He has work. And for all of that, he’s thankful.

But he also lost a lot. His home. His law office. His parents’ home. His town.

“The sense of loss, of losing everything that you’ve acquired your entire life, and your family has acquired,” he said. “I mean, we had generations of stuff. So, the depth of loss was extraordinarily deep. Unbelievably deep. And I never would have known what that could feel like.”

Driven by all those emotions, by anger, by duty, almost by a sense of survival, Earley joined a team of lawyers based in nearby Chico working to represent wildfire survivors against PG&E. That work now consumes his days.

It feels like the natural thing to do, the right thing, but it’s also taking a toll, one he didn’t expect.

“I just had no idea what it would be like to take on so many people’s losses,” he said. “Because I feel so deeply for every one of them.”

So many of his clients lost as much or more than he did. Many lost family members in the fire. Many others were uninsured and had nothing to fall back on. Many are still living in FEMA trailers. Many don’t have jobs.

“It’s tragic. It’s tragic. And there’s no end in sight really,” Earley said. “It just keeps getting worse. Because it’s hard to get caught back up once you once you go deep. And just about everyone went deep financially just to survive, and then they never really recover.”

Even those who were insured are, almost across the board, finding out that their insurance money isn’t getting them that far. It might pay off the mortgage on their lot, which is now worth much less than it once was, but it’s not going to be enough for them to afford to build or buy a new house.

Because of that, Earley gets frustrated when he hears people say they don’t think they’re entitled to file a claim against PG&E because they got money from their insurance company.

“You were not insured for everything that you lost,” he said. “Even what you were insured for, there’s no way that’s enough to get you back.”

“I want PG&E to know what the value of the stuff that burned was. And not just them. I want every company who has the ability to destroy entire communities by not paying attention, [to know] what it costs in terms of property and lives,” he said. “So when they do their financial evaluation and make a financial decision, they always put the safety of the community first … They have to know what it costs to do something like this.”

Earley, like Mike Danko and Debra Lucero, is confident the deadline for people to file a Proof of Claim with PG&E will be extended. But even then, he said, it will still likely be 8 or 10 months, maybe a year, before survivors actually see that money.

“The recovery that we’re hoping for, and I believe very strongly will help people, it’s going to be a little bit too little, and it’s going to be definitely late,” Earley said. “I hope not too late. But late.”