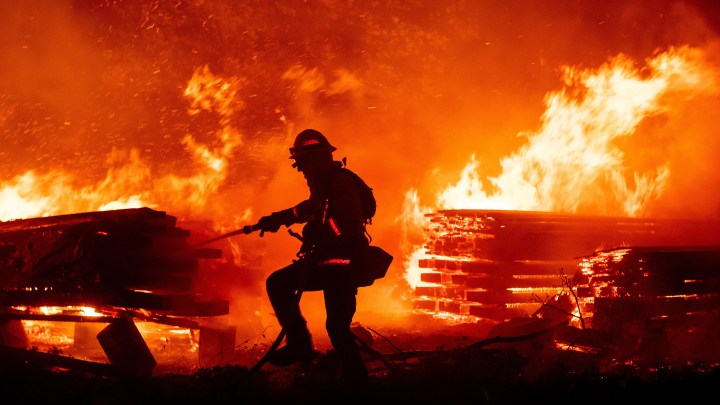 COPY
A firefighter douses flames as they push toward homes during the Creek Fire in Madera County, California, on Sept. 7. Josh Edelson/AFP via Getty Images

A firefighter douses flames as they push toward homes during the Creek Fire in Madera County, California, on Sept. 7. Josh Edelson/AFP via Getty Images
Listen Now

As wildfires blaze up and down California, Oregon and Washington, the flames and smoke seem more and more like a regular part of life during fire season on the West Coast.

In many parts of the region, it’s getting increasingly expensive to insure one’s home against fire damage. For homeowners, it’s an issue of affordability. And insurance companies are also struggling to keep up.

Californians living in areas with high wildfire risk increasingly face this predicament. Their insurance policies aren’t being renewed, “indicating that insurers are stressed, and so you’d expect them to pull back in those areas,” said Lloyd Dixon, senior economist at the Rand Corp.

He said in California, Oregon and Washington, homeowners still have options through what’s known as the FAIR plan — basically an insurer of last resort. But he said there are drawbacks.

But it’s some coverage in a shrinking market. Janet Ruiz, director of strategic communication at the Insurance Information Institute, a trade association, said because rates are regulated, some insurance carriers aren’t able to charge enough to cover the increasing risk of wildfires.

“You can imagine the carriers are looking at their books and making sure they have the right amount of money in reserves to pay out claims,” Ruiz said.

And as climate change accelerates and wildfires on the West Coast keep growing, the historical data traditionally used for rate calculations is just no longer an adequate predictor, said Jeff Schlegelmilch, director of the National Center for Disaster Preparedness at Columbia University.

“If we’re looking at the last 10 years, that’s not actually going to give us a picture of the next 10 years,” he said.

As wildfires continue throughout the West Coast, Schlegelmilch said insurance in vulnerable areas will only get more expensive and harder to find.