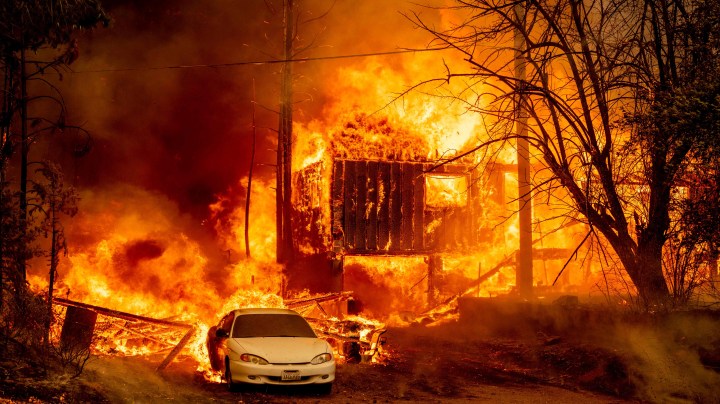 A home is engulfed in flames as the Dixie fire rages on in Greenville, California on August 5, 2021. Josh Edelson/AFP via Getty Images
A Warmer World

A home is engulfed in flames as the Dixie fire rages on in Greenville, California on August 5, 2021. Josh Edelson/AFP via Getty Images

Whole towns in California wiped off the map by wildfires. Hundreds killed or injured by extreme flooding in Western Europe. Record-smashing heatwaves in Oregon.

The world has always dealt with natural disasters, but climate change means we’re facing them with higher volatility, said Matthew Kahn, an environmental economist at USC.

Insurance companies are struggling to keep up because of the way in which they calculate risk.

“Most insurance companies, the way they look at the world is very backward-looking. So they’ll look at data and say, ‘This is the probability something’s going to go on fire,’” said Kia Javanmardian, a senior partner at McKinsey. “When you have a phenomenon like climate, the past is no longer representative of the future.”

Some insurance companies are trying to adapt to a warming world and are taking baby steps to prevent property damage. In the case of wildfires, for instance, they might clear flammable brush or install sprinklers, Javanmardian said. But those preventative measures can only do so much.

Going forward, Javanmardian said, insurance companies may have a heavier hand in shaping human behavior. It’s unlikely that homebuyers would purchase (or be able to purchase) a house in uninsurable areas, for example. That could potentially mean settling in areas that are safer from a climate perspective.

Settling in areas insulated from floods, wildfires or other natural disasters is great, but what that means for people who already live in areas increasingly impacted by a changing climate is playing out in real-time.

Homeowners in Colorado have been denied coverage by insurance companies that say their homes are at risk for wildfire damage. The same can be said of homeowners in California, where properties built in the wildland-urban interface — areas highly susceptible to wildfires — have faced unaffordable coverage options among the already limited ones available.

Insurance companies are feeling the pain of climate change in their own pocketbooks, too. Insurance payouts averaged $31 billion a year from 2010 to 2020, according to Grist. That’s up from $19 billion annually the decade before.

So what can be done to ensure insurance is increasingly responsive to climate change going forward?

For one, governments can play a larger role in the insurance market. The U.S. already allows homeowners to purchase federal flood insurance. But some economists, like Javanmardian, worry that that’s just a BandAid solution: Though it provides stability in the short or mid-term, the expense of building and rebuilding may be unsustainable.

Another solution may be for insurers to lean into the use of geospatial data.

“Car insurers can charge men more than women. Life insurers can charge older people more for a policy than younger people,” Kahn said. “Will the American courts allow insurers to charge more for properties in fire zones and flood zones and less for properties and safe places? If the answer is yes, the insurance industry can push economic activity to higher ground into safer places.”

Safe places which, of course, may become increasingly unaffordable as the climate crisis prompts a mass migration, further splintering the impacts of climate change along class lines.

Through climate projections and data on assets (think neighborhoods or power plants), Jupiter quantifies the climate risk — from things like floods, wildfires, drought, heat and wind — as well as the cost of a disaster for any point on the planet. The company’s clients include Liberty Mutual Insurance, BP, NASA, New York City and the City of Miami.

“The world is a very, very different place, even in just five years, in terms of the awareness of [climate change] risks and the impacts on companies, businesses and reputations,” said Rich Sorkin, Jupiter’s CEO and co-founder.

One complicating factor can be the mismatch between annually assessed insurance rates and the assets owned. Take a 30-year residential mortgage, for example. Despite being more inherently involved in the risk business, “the banks are actually moving much faster than the insurance companies [on climate change],” Sorkin said.

Banks are more frequently committing to net-zero investments, for example. Some banks are also transferring the mortgages of homes in vulnerable areas to organizations like Fannie Mae and Freddie Mac.

Though banks may be able to transfer the risk of potential mortgage defaults to other lenders, it may not be as easy for vulnerable communities, as low and middle-income families are pushed to areas prone to higher risks of wildfires or floods. (Regions which some reports predict could be “uninsurable.”)

And as Americans flock to areas more likely to be uninhabitable in coming decades, insurance companies must read the writing on the wall or risk collapse — which would further put those who buy insurance policies at risk.

“We need a Paul Revere here,” Khan said. “The insurer can be the adult in the room, educating people who may not fully appreciate the new risks we face — sea-level rise, smoke, fire risk — because the insurer is on the hook.”