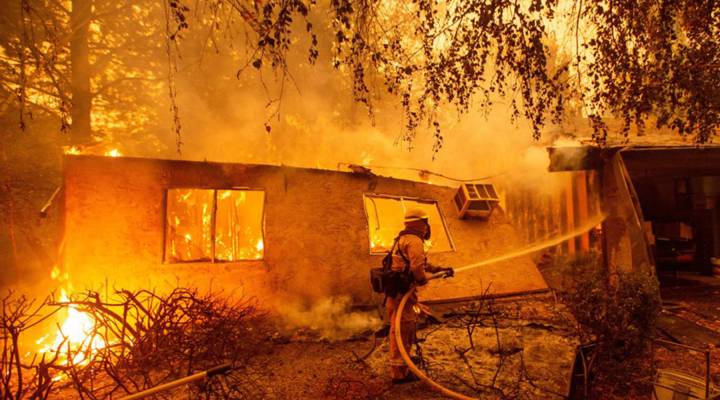 Physical devastation from the California wildfires is still being quantified as fire victims make the trek back to their homes, or what’s left of them.

Dunn lived in his home for about 18 years. Now he’s trying to quantify all he lost so he can get reimbursed from his insurance company.  The process is taking longer than he expected.

“It’s everything you have, like, it’s crazy, the towels, the knives and the forks, and then you’ve got like, nothing.”

As thousands of victims of the California wildfires calculate their losses, insurance companies will reimburse those claims by relying on their own insurance, called reinsurance, to pay those bills, which are expected to be unprecedented.

Increasingly though, insurance companies will also rely on a financial instrument called a catastrophe bond to pay for losses from disasters like wildfires. And the federal government could, too.

CAT bonds, as they’re called, were first issued in the late 1990s. Like all insurance, the bonds are basically a gamble.

“Someone’s taking a bet that either the wind won’t blow or the ground won’t shake or the fires won’t rage, and they put down some capital,” said Daniel Stander, RMS global managing director.

The terms of the relatively short bonds allow investors to keep their capital — along with hefty double-digit cash returns — if nothing happens.

But if disaster does strike, investors can lose their entire investment, including their principal.

“So the last two years have been difficult because of the number of catastrophes. Certainly 2005 with [hurricanes] Katrina, Rita and Wilma was difficult,” said Michael Millette, a managing partner at Hudson Structured Capital Management.

And yet the CAT bond sector is growing. Industry publication Artemis estimates that about $100 billion is currently invested in catastrophe-linked securities.

The bonds are popular with institutional investors because they’re not correlated to the stock market or other capital markets.

He added that CAT bonds were generally some of the best performing sectors of the market during the last financial crisis, which has also stoked their popularity.

The instruments even caught the eye of the Federal Emergency Management Agency. FEMA issued its first CAT bond this year to help shore up the financially underwater National Flood Insurance Program. RMS advised the government on its CAT bond issuance:

“We get the risk off the taxpayer balance sheet and use private capital that is geared up precisely to take on these kinds of risks,” said Stander, with RMS.

Stander is hoping FEMA considers a new CAT bond to help it pay for wildfire recovery as well. And he’s urging the federal government to consider using other forms of private capital to help it pay for all kinds of disasters, from pandemics to terrorism.

“Wildfire would be a good candidate for such use of private capital.”

Catastrophe bonds come in many forms, and can be stacked up in tranches and resold, similar to credit default swaps and other financial derivatives that contributed to the 2008 housing crash and financial crisis.

Some policy experts are concerned the bonds could be the basis of a new financial bubble.

“The way we refinance things gets so abstracted from the underlying risk that we actually lose sight of how easily it could all come toppling down,” said Jeff Schlegelmilch with the National Center for Disaster Preparedness at Columbia University’s Earth Institute.

He also warned that the data used to set the risk formula of these bonds could be flawed. CAT bond terms are sometimes set by risk modelers that look to historical climate data to come up with their parameters. For instance, a bond will pay out if wind speed reaches a certain number of miles per hour or if the high-water mark hits 5 feet.

“If you’re using historical data to evaluate the risk of another wildfire next year, you’re not actually working off of good data, because the baseline environment is changing as a result of climate change,” Schlegelmilch added.