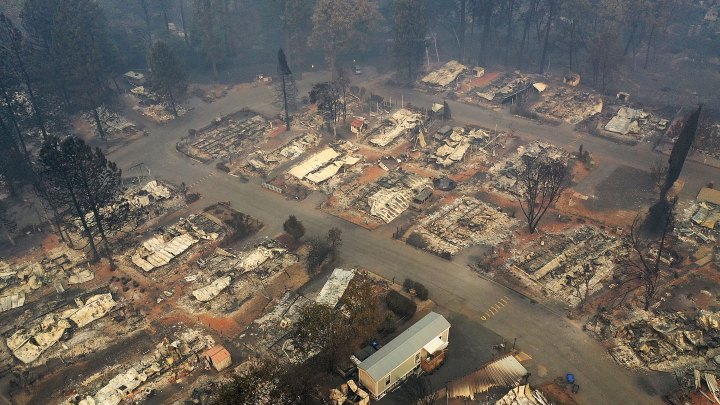 COPY
An aerial view of a neighborhood destroyed by the Camp Fire on Nov. 15, 2018, in Paradise, California. Justin Sullivan/Getty Images

An aerial view of a neighborhood destroyed by the Camp Fire on Nov. 15, 2018, in Paradise, California. Justin Sullivan/Getty Images
Listen Now

Two years ago, California’s deadliest wildfire swept through the town of Paradise and nearby communities. The 2018 Camp Fire’s official death toll is 85 people. It destroyed more than 18,800 structures, according to California fire officials.

Jhan and Tony Dunn were among those displaced by the fire. They moved to a neighborhood near Asheville, North Carolina, and say they’re still battling their insurance company, Nationwide Insurance. By their estimate, the company owes them more than $280,000.

“We stopped communicating with them verbally because it was just way too much of a problem. It was very stressful,” said Jhan Dunn.

The Dunns say Nationwide asked them to itemize everything they lost.

“Our list has 6,200 items in it. It’s just crazy to have to go through every room and remember ‘OK, my office drawer — what was in there?’ It’s painful and traumatic. It’s not right that anybody would ask you to do that,” said Tony Dunn.

The Dunns also say Nationwide promised to cover the cost of moving to North Carolina, but later refused to do so.

The Dunns are not alone in their frustrations with the company. Back in Paradise, another Camp Fire survivor, Jeanie Webb, started a Facebook page where fellow Nationwide policyholders can exchange tips and vent.

“Everything is a nickel-and-dime issue where you’ve got to back them all the way up to the wall, sic the Department of Insurance on them, fight with them for six months to get one penny. Every single thing is like that with them. And it’s exhausting,” Webb said.

In a written statement, Nationwide Insurance spokesperson Ryan Ankrom said the company can’t comment on individual claims, but is working in good faith to fully honor commitments to policyholders.

Nationwide isn’t the only insurer facing criticism. But California’s Insurance Commissioner Ricardo Lara has opened an audit known as a market conduct exam of Nationwide’s practices. And while some people are still trying to get paid for their claims, those who haven’t lost their homes have a different concern.

“Rates are going through the roof, and the ripple effect as companies pay out on claims will go through the market for years,” said California Assemblyman Jim Wood, whose coastal district has been hit hard by large fires in recent years. “This is a huge issue that’s not going away anytime soon.”

Wood said he worries about the possibility that home and property insurers will pull out of California. Then his constituents won’t be able to get coverage at all.