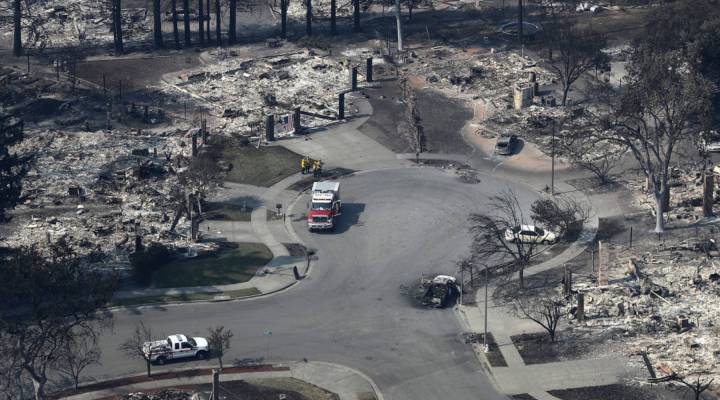 COPY
An aerial view of homes that were destroyed by the Tubbs Fire on Thursday in Santa Rosa, California. Justin Sullivan/Getty Images

An aerial view of homes that were destroyed by the Tubbs Fire on Thursday in Santa Rosa, California. Justin Sullivan/Getty Images
Listen Now

Wildfires raging across wine country in Northern California left 23 people dead, according to state officials, and at least 60,000 people evacuated from their homes. The 22 separate fires destroyed more than 3,500 homes and commercial buildings across Napa and Sonoma Counties, with the city of Santa Rosa especially hard-hit, and Calistoga newly threatened as dry winds strengthened again midweek.

As residents have begun to assess the damage in burned areas, most will be looking to homeowner’s insurance to rebuild.

“Fires cannot be excluded” from homeowner’s policy coverage, said Etti Baranoff, a professor of finance and risk at Virginia Commonwealth University. “It’s not like flood, most of the homes probably are fully insured, because we’re talking about a very affluent area.”

According to Michael Barry at the Insurance Information Institute, which provides consumer information on behalf of the insurance industry, approximately 95 percent of homeowners nationwide carry homeowner’s insurance — it’s typically required to get a mortgage.

“Californians who incurred a total loss should be able to rebuild a home of comparable construction materials and square-footage as the one that was previously there,” said Barry.

After past natural disasters, some homeowners have found they weren’t carrying a high enough level of dwelling protection to receive full reimbursement to rebuild.

Many policies these days provide “extended replacement value” for a dwelling — which covers rebuilding costs up to 25 percent above the policy’s upper limit.

But if that upper limit is inadequate to begin with, or has not kept up with inflation in construction costs over several decades, the homeowner can still come up short after insurance pays out. The most comprehensive policies, experts say, provide for “guaranteed replacement” of the dwelling as well as inflation.

Tatyana Deryugina, a finance professor at the University of Illinois, said that as wildfires have taken a larger financial toll in recent years, “individuals living near fire hazard areas do have a problem of finding insurance.”

Unlike for homeowners living in government designated flood zones, where the federal government backstops flood insurance (often with a substantial premium increase), there isn’t a federal program to help cover homeowners in areas at high risk for wildfires.