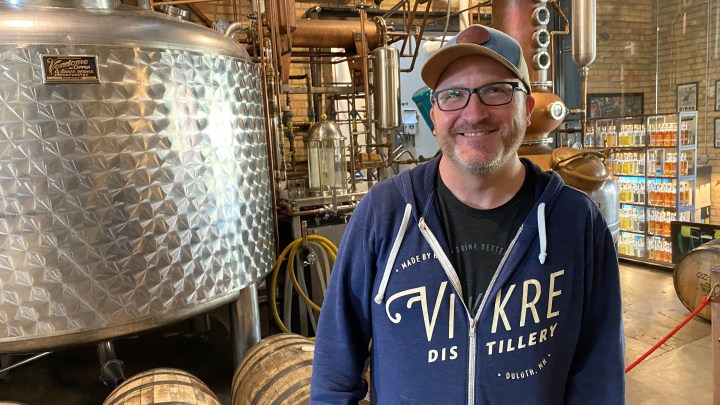 COPY
Doug Kouma moved to Duluth, Minnesota, from Sonoma County, California, in 2019. He said Duluth may soon be known as a "climate migration hub." Dan Kraker/MPR News
A Warmer World

“The air quality in San Francisco was, like, in the hazardous category for two weeks straight. And [it] just had considerable health impacts on my kids,” Alexander said.

So, when the pandemic hit in 2020 and another bad wildfire season was forecast, Alexander’s family hopped in their camper van and headed for Minnesota. Both Alexander, who works for a climate change nonprofit, and her husband had jobs that allowed them to work remotely.

They landed in Duluth, on the shore of Lake Superior. At first, they just intended to ride out the summer.

But “we just fell in love with it here,” Alexander said. Plus, she recalled, the air quality in California that year was horrible. So, they decided to make the move permanent.

Now that working from home is widely accepted, more and more people are choosing where that home should be. For some people, that means places they feel are safer from the impacts of climate change, including Duluth.

Alexander’s family bought a house in Duluth right on the lake.

“I did get into paddleboarding this summer, which is not something I ever expected I would do,” she said. She never fathomed she’d live on a lake, “but it’s pretty amazing.”

Alexander is among the people who moved to Duluth in the past few years, at least in part, because of climate change.

Jesse Keenan researches climate migration at Tulane University in New Orleans. A few years ago, when he was based at Harvard, he identified Duluth as an ideal landing spot for people like Alexander.

“There is a cohort of Americans who have the means, the resources, and they have the elective mobility to be on the move,” Keenan said.

But when Keenan first came to Duluth to discuss his idea — complete with pithy marketing slogans for the city, like “Climate-proof Duluth” — locals were skeptical. Real estate agent Karen Pagel Guerndt remembers when she heard about it. The was in the middle of winter, and the temperature was 20 below zero.

“And so to me, the whole idea of climate migration for folks coming here, it kind of made me laugh,” she said.

But then people started calling. She’s since worked with clients from North Carolina to Utah who cite climate change as one of the reasons for choosing Duluth, a small city of about 86,000.

There’s no data to show how many of those people there actually are. But Adam Fulton, who directs planning and economic development for the city, said more telecommuters are working from Duluth. And he’s hearing lots of stories about people moving in from out of state.

“There are multiple offers coming in sight unseen for properties that, you know, previously might have sat on the market,” he said.

That raises a potential problem for places like Duluth, where there’s a shortage of affordable housing. The median sale price of a house rose 10% in the past year to $240,000.

Fulton said the city is working to expand the variety of housing options for both newcomers and locals.

People say they factor in climate change when deciding where to move, according to the online real estate site Redfin. But a lot of them still end up moving to places like Florida and Arizona, which are facing severe climate impacts.

“I think it’s mostly just a select group of people who are maybe they’re the ones who’ve been personally impacted by climate change that are making the move based on that decision,” said Redfin Chief Economist Daryl Fairweather.

But no place is totally immune to the effects of climate change. Last summer, wildfires burning in Canada blanketed Minnesota with smoke.

Still, Doug Kouma, who moved to Duluth two years ago after dealing with wildfires and flooding in Sonoma County, Northern California, said he knows several other Californians who are considering a similar move.

“I think Duluth as a climate migration hub is already a thing,” Kouma said. “I think we’re just starting to recognize it. And I think two, three, five years from now, it’s going be what Duluth will likely be known for.”