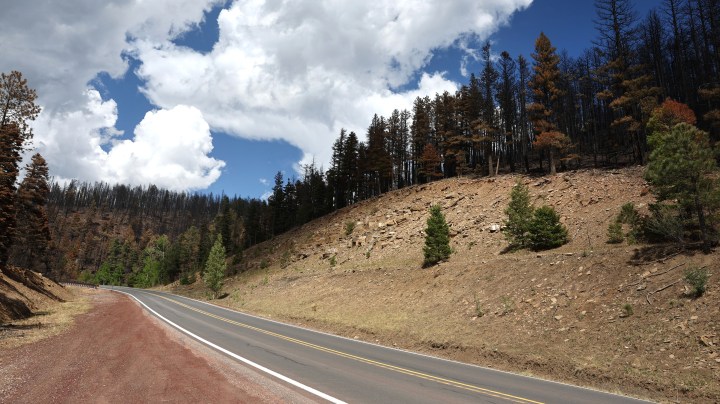 Every summer, lots of folks ditch their sweltering cities in places like Texas and Oklahoma for the mountains of northern New Mexico. Francisco Guevara, owner of Los Rios River Runners in Taos, has been taking those tourists rafting on the Rio Grande since the ’70s.

“Normally this time of year, we’re slammed with business, we’re turning dozens of people away every day,” he said.

But this year, the largest wildfire in New Mexico’s history caused some people to rethink their trips.

Between climate change and a historic drought that has turned Western forests into tinderboxes, wildfire seasons are getting longer and more intense. That’s bad news for some rural towns that rely on outdoor tourism.

In addition to the canceled bookings, Guevara said the national forests in northern New Mexico are closed due to fire danger, making many of his most popular rafting routes impassable.

“We’re having to scramble and reinvent,” he said.

About 20 miles west of Taos, in the village of Angel Fire, Brent Dunn is also feeling the forest closures. He runs an outdoor gear shop called Mountain Sports of Angel Fire.

“I would conservatively say we’re going to see a 20% downturn in sales,” Dunn said.

Business at his shop is picking up after a spring where he wasn’t renting out mountain bikes or outfitting too many backpackers. Instead, wildland firefighters were some of his most frequent customers.

But between the shrinking ski season and the expanding wildfire season, Dunn said business owners in his rural mountain community are on their toes.

“You’re not able to expand or run full out, if you will. Because you just don’t know. you may have had a good season one year and you may have a bad one the next two,” Dunn said.

And it’s not just the wildfires themselves, according to Natalie Ooi, who studies outdoor recreation economies at University of Colorado, Boulder.

“There’s a fire in New Mexico, we see the smoke impacts and the effects to air quality in Colorado.” And who wants to go camping when the air is full of smoke?

Ooi said even a few slow summer weekends can really hurt a town where a mountain range, a river or a desert canyon is the primary economic driver.

“One of the reasons why so many rural communities in the West turn to tourism is the fact that, you know, they’re rural,” Ooi said. “The ability to attract other industries is limited.”

But more intense wildfire seasons and other complications of climate change are changing the calculus for these towns. That’s true in Bend, Oregon, a town that’s still recovering from a devastating wildfire two years ago.

“Living in Bend in 2020 was like a summer that didn’t happen,” said Katy Brooks, who heads up Bend’s Chamber of Commerce.

She said tourism started rebounding in the summer of 2021. There was no longer a fire burning close by, and the pandemic made trips to the mountains attractive. This year, inflation is doing that.

“People are driving in cars to get here because airfares are so expensive,” Brooks said, adding that most of the tourism bump is coming from nearby cities like Portland, Seattle and Boise.

For these visitors, camping in the Cascades is one of the cheaper ways to go on vacation right now. Brooks said some businesses in Bend are finally starting to recoup their losses from two years ago.

“So there’s a bit of “make hay while the sun shines” that happens,” Brooks said.

Because another natural disaster could be just around the corner.