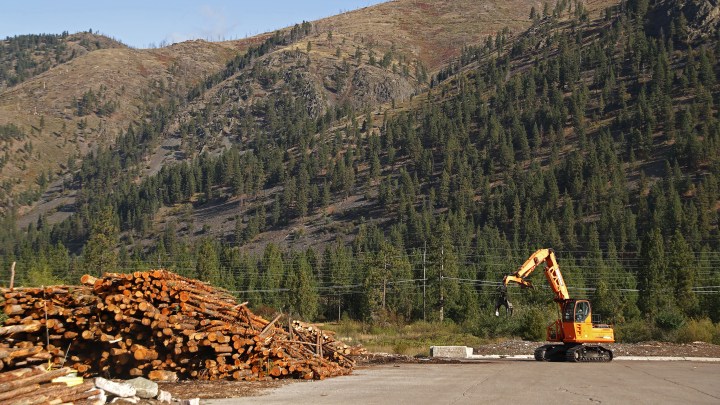 COPY
The timber industry around the town of Cohasset could see an economic boom thanks to the planned construction of a new mill. Chip Somodevilla via Getty Images

The timber industry around the town of Cohasset could see an economic boom thanks to the planned construction of a new mill. Chip Somodevilla via Getty Images
Listen Now

It’s been a tough decade for Minnesota’s forest-products industry. The housing collapse in 2008 contributed to the closure of three plants that made oriented strand board, or OSB — a plywoodlike product used in homebuilding.

A few years later, a fire destroyed one of the state’s largest paper mills. And other plants and paper mills have either closed or downsized.

That’s why a lot of Minnesotans were excited when North Carolina-based Huber Engineered Woods announced plans this summer to build a $440 million OSB plant in the small town of Cohasset.

“It’s the biggest deal in 40 years since the last mill was built in Minnesota,” said Scott Dane, executive director of the American Loggers Council.

New home construction grew more than 6% in June, as homebuilders scrambled to address a housing shortage in many parts of the country. That means demand for products like OSB is also growing.

The new facility is projected to directly create more than 150 jobs. But it’s also expected to provide a big boost to the region’s loggers, and the truckers who transport timber to the mill.

“What this announcement does is gives a lot of encouragement to those who have been struggling over the years, that there is something new coming,” Dane said. “It will encourage them to reinvest in their businesses and commit to the long term.”

As mills closed in recent years, the amount of timber harvested from Minnesota’s forests dropped by more than a million cords every year, from more than 4 million cords to about 2.8 million.

That’s bad for loggers but also, many people argue, for the forests.

A healthy forest is a diverse forest, with different species and different ages of trees, said Jon Drimel, who manages the Minnesota Department of Natural Resources’ timber program. That diversity helps protect forests from wildfire and disease and provides benefits for wildlife.

“So, having that diverse forest is important,” Drimel said. “And our main tool to do that is through harvest and forest management.”

Drimel said the new plant will be located in the center of Minnesota’s timber basket, which will give loggers more options for selling their product.

The plant could have important benefits in the battle against climate change as well, which may seem counterintuitive. After all, trees pull carbon dioxide out of the atmosphere. So how could cutting down more trees help the climate?

When trees die in the forest, they decompose and that carbon is released, said Eli Sagor, extension specialist with the University of Minnesota at the Cloquet Forestry Center

“When we harvest those trees and turn them into long-lived wood products like oriented strand board, which is a building material, it then gets put into a building where that carbon remains locked up for decades, many decades,” Sagor said.

But the project’s environmental and economic benefits will come at a steep cost. The state has pledged more than $60 million in public funding to lure the plant to Minnesota.

“I’m not a huge fan of big incentives, but that’s the world we live in. If you want to land a project like this, this is the thing that other places do,” said Mark Phillips, commissioner of a northern Minnesota-based state development agency that awarded part of the subsidy.

The company hopes to break ground this fall or in the spring.