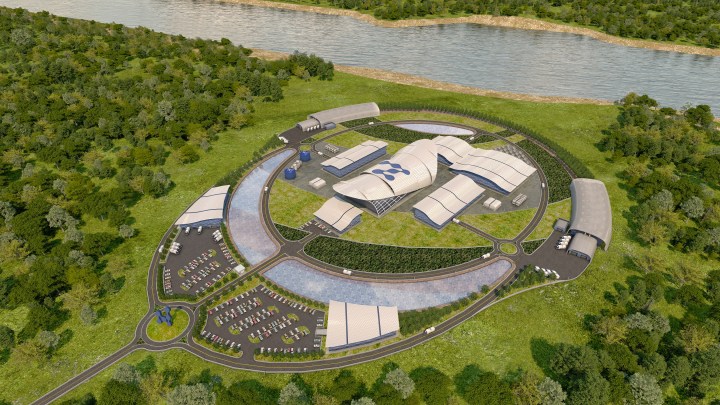 COPY
An artist’s rendering of a NuScale Power nuclear facility. Though the energy source is carbon-free, accidents like the disaster at Fukushima, Japan, have diminished its popularity. Courtesy NuScale Power

An artist’s rendering of a NuScale Power nuclear facility. Though the energy source is carbon-free, accidents like the disaster at Fukushima, Japan, have diminished its popularity. Courtesy NuScale Power
Listen Now

As more Americans were out and about again and utilities fired up more power plants fueled by coal, greenhouse gas emissions in the U.S. rose more than 6% last year, according to a new analysis from the Rhodium Group.

To mitigate climate change, however, the world needs to reduce greenhouse gas emissions over time. More or less everyone agrees that requires dramatically improving battery storage and replacing fossil fuels with renewable, zero-carbon energy sources like wind, solar and geothermal.

But there’s one more significant zero-carbon technology that its advocates think should be part of the climate-saving mix: nuclear.

We’re not likely to build many new big nuclear power plants, given the expense, safety concerns and delays they’ve experienced. But small nuclear plants are in development and could be deployed later in this decade.

NuScale Power, a firm based near Portland, Oregon, is promoting “small modular nuclear reactors.” The company plans to get full approval from the federal Nuclear Regulatory Commission to build and fire up its first nuclear plant at a site in Idaho by the end of this decade.

“NuScale’s scalable design — a power plant can house up to 12 individual power modules — offers the benefits of carbon-free energy and reduces the financial commitments associated with gigawatt-sized nuclear facilities,” says a voice-over during a video tour of its facilities.

The company is one of several developing small, modular nuclear plants. It’s somewhat ahead of the pack, having received design approval from the NRC for one of its models, which uses the industry standard light water as a coolant.

A plant can be sited on just 35 acres near a city or manufacturing facility, per Chris Colbert, NuScale’s chief strategy officer.

“Eliminating about two-thirds of the systems and components that are required for safety in a typical large reactor,” he said.

The plant would be compact, built in a factory and shipped — ready to safely produce power, according to Colbert.

“In the event of a station blackout, such as was experienced at Fukushima [Japan, site of a nuclear disaster in 2011], we can safely shut down our plant and our modules without any operator action, without any AC or DC power and without any additional water,” he said.

Nuclear waste would be stored in dry casks on-site, just like at existing nuclear plants, Colbert said. It’d also be protected from release, theft or sabotage.

NuScale still faces major obstacles in the future, according to Alexandra Klass at the University of Minnesota Law School.

“It is significant to get the design approved. But there’s still a long way to go in the permitting process. There’ll be appeals, there might be litigation,” she said.

Still, Jonathan Lesser at the Manhattan Institute said new forms of nuclear generation are necessary and should be fast-tracked by regulators to eliminate carbon emissions.

“Folks who think it can be achieved solely with wind and solar and battery storage backup are frankly deluding themselves,” he said. “It’s physically impossible.”

“You don’t find many clean-energy indexes or folks who are tracking the clean energy sector that currently include nuclear. You just don’t see a lot of that,” said Ron Pernick, co-founder of Clean Edge, which develops clean energy stock indexes. “What point would we consider next-generation nuclear technology a clean-energy solution? Can they address nuclear proliferation, nuclear waste concerns? Can they address safety? And that’s still an open question.”

When that question was put to Chris Colbert at NuScale, “my response to that is, quite honestly, nuclear energy is carbon-free energy. Full stop.”

Now, NuScale is closer to commercial deployment than rival developers that use more novel technology than light water — like liquid metal, salts or pressurized gas — to cool their small reactors.

But a lot remains unknown about how NuScale’s reactors would perform in the field, said Edwin Lyman at the Union of Concerned Scientists.

“The design itself does have novel features, which are in large part untested. So I think there are some technical uncertainties, and there are also financial uncertainties, which raise questions about when this reactor is actually going to be deployed,” Lyman said.

NuScale recently announced it’s planning to sell shares to the public this year and hopes to raise several hundred million dollars to support that final drive to commercial operation.