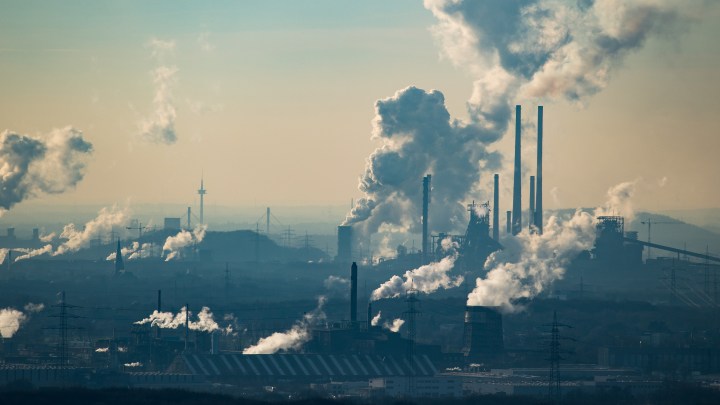 COPY
Steam and exhaust rise from the chemical company and coking plant in Oberhausen, Germany in January 2017. Lukas Schulze via Getty Images
A Warmer World

Steam and exhaust rise from the chemical company and coking plant in Oberhausen, Germany in January 2017. Lukas Schulze via Getty Images
Listen Now

That climate change has figured prominently in the national election campaign now underway in Germany is hardly surprising.

Devastating flash floods that killed almost 200 people there this summer have focused even more attention on the issue in a country already reputed to be one of the most climate-conscious in the world. Around 50% of electricity in Germany comes from renewable energy sources, and the government in Berlin has signed up to some of the most ambitious decarbonization targets, including net-zero emissions by 2045 — five years earlier than most other developed economies.

The big question on German voters’ minds, and one that will surely get an airing at the COP 26 Climate Change Summit in Glasgow in November, is whether Germany can achieve those exacting targets. It turns out that in spite of its squeaky clean image, Germany is by far the biggest carbon polluter in Europe and, according to some sources, the sixth-biggest on the planet.

Coal is one of the leading culprits.

“Within the European Union, next to Poland, Germany is the country with the largest share of coal in its energy mix,“ said Sascha Müller-Kraenner of Environmental Action Germany. “Everything that Germany has done in the build-up of renewables, which is quite good, has been counteracted by the huge share of coal that we still have in the system.”

Twenty percent of German power is generated by burning coal — about the same as in the U.S. — but a large amount of the German coal is of the most carbon polluting type, lignite. This wet, dark brown, combustible mineral is scraped from huge open-cast mines like the one in the Garzweiler region in North-Rhine Westphalia, where activists have been campaigning against plans to expand the works.

“We oppose this on social and environmental grounds,” said Christopher Laumanns of Alle Dörfer Bleiben (All Villages Remain).

“These holes are so big they gobble up whole villages and have displaced thousands of people. But they’re also a big environmental threat,” Laumanns said. “The Garzweiler mine is to be enlarged so much that it’s absolutely sure that it will mean Germany can’t meet its emission targets.”

Germany has committed to phasing out coal by 2038, but Laumanns would like to see a much quicker exit and hopes the government will be shamed into action at COP26.

“I hope that it’s going to be an international humiliation for Germany, so that this green image of Germany is corrected,” he said.

Another reason that Germany faces a formidable task in getting to net-zero by 2045 is the country’s decision, following the 2011 Fukushima disaster in Japan, to phase out nuclear power. The worst nuclear accident since Chernobyl persuaded Chancellor Angela Merkel to scrap the German nuclear program.

“Chancellor Merkel saw the anti-nuclear sentiment increasing significantly and decided to take action even though that may have been counterproductive in terms of the larger issues around climate,” said Matt Oxenford, European analyst with The Economist Intelligence Unit.

The country’s last three nuclear plants are set to close next year. The absence of nuclear power, reliance on coal and sporadic nature of renewables have convinced some German observers that net-zero by 2045 is not attainable.

“No, it isn’t. And everyone who is knowledgeable about the power system will agree on that,” said Fritz Vahrenholt, a former oil and wind power company executive.

Controversially, he rejects the scientific consensus and claims that while the world does need to phase out fossil fuels, it has a lot more time before the climate crisis bites. And, he said, that’s just as well.

“We need the time of a generation to come from a coal-, oil-, gas-driven economy to a carbon dioxide-free, renewable power system,” he said. Vahrenholt believes that attempting to achieve carbon neutrality in just over two decades will lead to power blackouts. “There will be a hard landing, and this will bring the Germans to reality,” he said.

This is a taboo subject in Germany. No company will come out and publicly trash the net-zero commitment, said Sebastian Bolay, an energy expert with the German Chambers of Commerce.

Yet, “any industrial companies are skeptical that it is possible to do this and remain competitive,” he said. However, Bolay pointed out, the companies in Germany’s burgeoning renewable and energy-efficiency sector are happily embracing the challenge of net zero by 2045.

“They see a lot of opportunities in this drive towards climate neutrality,” Bolay said.

Germany’s big car manufacturers are certainly jumping on the electric-powered bandwagon. Volkswagen now has the biggest electric vehicle factory in Europe, and BMW has pledged to cut emissions for each of its vehicles by at least 40% by 2030.

The government and German industry will have to spend about $120 billion a year to complete the net-zero transformation in time, Bolay said. As an energy expert, does he think it’s possible?

“I think it’s feasible. But it’s more difficult to get out of nuclear power and coal at once. I mean there’s no question and … yes. We’ll see,” he said.