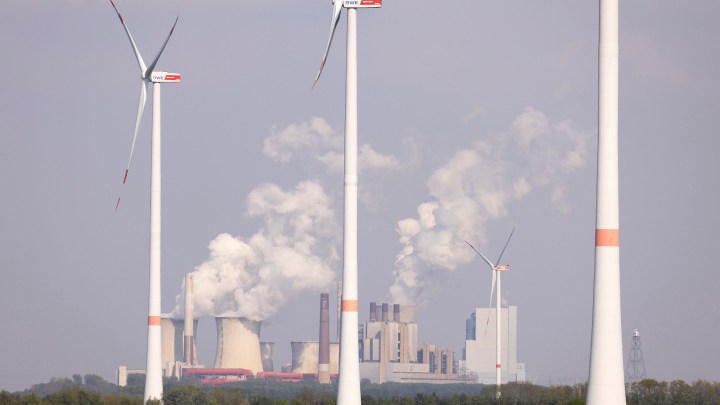 COPY
With the war in Ukraine restricting Europe's access to Russian energy, Germany is among the nations seeking alternative fuels for generating electricity, including more coal. Andreas Rentz/Getty Images
A Warmer World

With the war in Ukraine restricting Europe's access to Russian energy, Germany is among the nations seeking alternative fuels for generating electricity, including more coal. Andreas Rentz/Getty Images
Listen Now

Russia’s war in Ukraine continues to threaten energy security, particularly for European nations. Germany, Austria and now the Netherlands are firing back up their coal power plants to limit the use of Russian natural gas, an energy source that is increasingly difficult to rely on. While coal may meet short-term supply needs, it may also impede the fight against climate change.

Vijay Vaitheeswaran is the global energy and climate innovation editor at The Economist. He wrote about how climate technologies are shaping the energy transition in The Economist’s Technology Quarterly section. And he joined “Marketplace Morning Report” host David Brancaccio to discuss the transition away from fossil fuels and the difficulties that countries like Germany are facing in this moment.

David Brancaccio: All right, you want to keep the heat and the lights on in Europe. But what does this do to Europe’s climate targets? I mean, they’d agreed to these targets.

Vijay Vaitheeswaran: You’re right. The climate ambition in Europe was perhaps the highest in the world coming out of the U.N. summit, the so-called COP26 summit in Scotland last year. But we had an energy shock last winter with [natural] gas prices surging in Europe, and we had the war in Ukraine with the Russian oil embargo and gas, threatening of cutoff and so on. So what we’re really seeing is that energy security is threatening to push climate sideways, maybe even backwards, for five or 10 years, unless Europe finds a way to thread the needle. And that’s a lesson that California, Australia and other places in the world that are trying to balance climate and energy security can learn from.

Brancaccio: You were on the ground in Germany recently, I understand. What’s the thinking there regarding coal?

Vaitheeswaran: Coal is getting a short-term reprieve in that they’re actually encouraging coal plants to run at a higher capacity-utilization rate in the short term, which is terrible for the climate, because they don’t want to have blackouts. There’s a real serious threat — and Germany is taking it most seriously out of all European countries because they have the most to lose, they’re very reliant on imports of Russian gas for their industry and for their households — that Russia is going to cut off the gas completely in the run-up to winter at a moment of maximum leverage. It’s really a question of, I think, [Russian President Vladimir] Putin waiting for his moment to strike. And so they’re trying to find all manner of alternatives. Increasing coal production a bit is one of them. They’re politically constrained from putting their nuclear power because they’ve decided to shut them down. So ironically, or sadly, they’re taking off zero-carbon nuclear power from the grid by the end of the year. And then that really leaves them with trying to get as many renewables on the grid as quickly as possible. And that one questionable choice, from the point of view of the greens: natural gas as the bridge. And so very hypergreen Germany, and Europe more broadly, is actually making an enormous bet on natural gas coming to the rescue.

Brancaccio: Now, you’ve been reporting on the great energy transition, not just in Europe, but globally. Engineers — I mean, I’ve reported on this over the decades as well — would love to find a way to grab the CO2 before it gets out there in the atmosphere and squirrel this carbon dioxide away. But, you know, getting into the second half of 2022 here, Vijay, do we know how to do this in a useful, efficient way?

Vaitheeswaran: So we know how to do it. But here’s the thing. You know, there is a way of capturing carbon and then storing it in the ground, for example, known as carbon capture sequestration. We’ve known how to do this for decades. In Norway, they’ve done it for two decades successfully. The oil company there has stored carbon dioxide safely and reliably underground. But the oil industry has not been very interested, policy has not been overly supportive. So we don’t really do this. But this is where there’s a lot of interest. One way to do it is really to allow fossil fuels to be burned and then to store it afterwards. It’s expensive, it’s fiddly, it’s not going to happen unless there’s subsidies of some kind. Another alternative is really think about how do we take something like natural gas and turn it into hydrogen, a fuel of the future, an energy carrier that doesn’t contribute to climate change? And when you take off that carbon dioxide, store that in the ground, for example, sequester it. And that approach of turning natural gas into hydrogen that can be burned cleanly and used in other ways, that’s sort of the future that a number of parts of the world are looking at, on how you use natural gas today but future-proof it by getting your equipment hydrogen-ready.

Brancaccio: Right. But that’s not something that’s gonna get us through the next couple of years, given Russia and Ukraine.

Vaitheeswaran: Definitely not. But if you don’t make plans for that now, all of the new fossil plants that are built are going to get locked in. The LNG terminals — you know, the liquefied natural gas that we hear in the news that America is now sending our cargoes to Europe to try to help them get off Russia. And that’s what Donald Trump actually called “molecules of freedom,” right? This was mocked at the time as this, you know, crazy idea from the Americans. Well, guess what? That’s exactly what Europe has asked for. “Please send us your molecules of freedom. We want to be free of Russian gas, and we’ll buy American LNG, liquefied gas.” Well, all of the terminals that are being built to re-gasify, to turn it back into useful natural gas, those last 30 or 40 years. Investors expect a payback. But if in 10 years, Europe says, “No, no, no. We don’t like gas anymore. We want to go to other things, renewables or hydrogen,” those become stranded assets. And so there has to be a way to future-proof or get them ready for that future constraint and to pay investors more. And that’s, that’s exactly what countries like Germany are coming up with: policies that would compensate investors more for future-proofing their assets. And if they don’t do that, they will not be given permits to build them.

Brancaccio: Meanwhile, back with coal, coal producers are having a remarkably strong year. We’re watching in South Africa, coal producers are working hard to keep up with this new demand. And what had seemed like yesterday’s fuel source is back, at least for now.

Vaitheeswaran: This is a golden year for coal, right? After 20 years in which people have seen it as environmental enemy No. 1. There was actually a cover I wrote for The Economist 20 years ago predicting that coal will have to see a demise if we’re going to deal with not only climate change, but let’s remember there’s 100 different nasty local pollutants — toxins, mercury and other emissions — that kill millions of people a year due to coal burning in power plants. And so it really is something that we should try to move off of, and many countries have. But right now, we’re using more coal than last year. And we’re going to continue to do that because of the geopolitical problems of Russia as well as the slower ramp up of renewables that people are seeing in different parts of the world. So we’re going to see fossil fuels with us for a number of years — to some degree coal, but certainly natural gas is taking the lead in many countries at the moment.

Brancaccio: I wanted to ask you: We had that Supreme Court decision here in the U.S. last week that seems to mean if the U.S. is going to get more serious about climate change that Congress will have to specifically guide how it’s done. And you’ve seen the U.S. Congress. Where are we now?

Vaitheeswaran: That’s exactly the right analysis. I think it’s pretty clear that the agencies like the [Environmental Protection Agency] are going to have a harder time dealing with problems like climate change. This ruling could have implications for other issues as well. But certainly doing an economywide cap-and-trade system, for example, which some advocates support, will be very difficult for the EPA to pursue, although they could still do things at the level of the plant. I think that the Supreme Court was clear about that. But that’s harder and fiddly and inefficient, and probably going to meet a lot of legal challenges. Congress has to act, frankly. And even this Congress controlled by Democrats has been unable to get something through [Sen.] Joe Manchin. It’s very hard to see a future Congress that may be dominated by Republicans doing anything on climate. So I think that that pathway is now looking unpromising.

Brancaccio: So there we are politically. But what about technology? I mean, you don’t want to become an unreasonable techno-optimist. But if you’re going to move climate change forward, it’s going to have to be clever approaches.

Vaitheeswaran: You’re absolutely right about that. The political outlook looks challenging from the top down. But actually, when you look from the bottom up, we see a huge amount of innovation. A lot of it has to do with new kinds of climate technologies. Wind and solar are the cheapest way to make new energy, of course, but also things like green hydrogen. We’re seeing even the oil companies invest in carbon capture and sequestration. Huge amount of innovation happening from the bottom up. And climate tech, as well as at local governments, cities and states, have always been the laboratories of democracy but also of climate innovation in the U.S. So I think we’re going to really see forward momentum coming from markets, from technologies and from local policies in America.