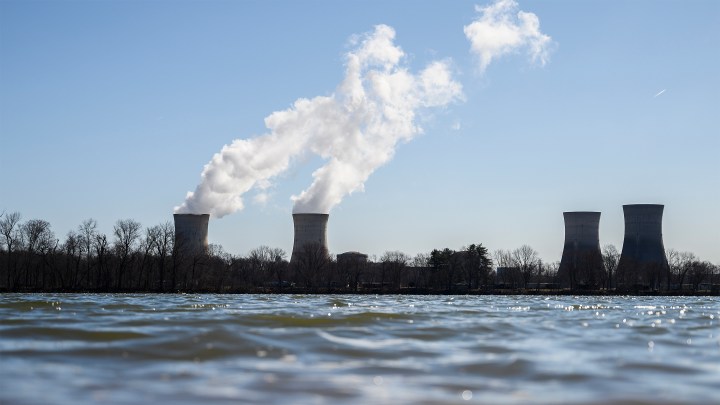 COPY
Steam rises out of the nuclear plant on Three Mile Island in Middletown, Pennsylvania on March 26, 2019. ANDREW CABALLERO-REYNOLDS/AFP/Getty Images

Forty years ago, Three Mile Island nuclear power plant in central Pennsylvania was the site of America’s worst nuclear accident. But that doesn’t deter Steve Letavic from showing it off.

That “jewel” will soon lose the last of its luster. Three Mile Island’s parent company, Exelon, announced on May 8 that the plant will be prematurely retired by the end of September.

Letavic says that will be economically devastating to the region: 675 well-paying jobs eliminated, and about $1 million in real estate tax revenue lost.

But Letavic makes more than an economic case for the plant: he says he supports it as an environmentalist, too.

“Look, I’m as green as you’ll get. I’m an outdoorsman. And when you look at what climate change is doing to our environment, it’s not hard to realize we have to have this as part of our energy portfolio,” Letavic said.

Exelon made that case as well: arguing, unsuccessfully, that the state legislature should provide it with clean-energy subsidies.

That might be surprising for anyone familiar with the accident. On March 28, 1979, one of the plant’s two nuclear reactors partially melted down, releasing some radiation. The accident became a potent symbol of the risks of nuclear power, said Natasha Zaretsky, author of “Radiation Nation: Three Mile Island and the Political Transformation of the 1970s.”

“There had been, prior to the accident, a growing anti-reactor movement,” Zaretsky said. “But I think it would be fair to say that the 1979 accident was sort of the nail in the coffin.”

Most studies on the effects of radioactivity released during the accident have not found conclusive evidence it resulted in long-term health problems, but scientists have cautioned they can’t rule that out.

Lately, though, nuclear industry advocates in Pennsylvania have been pushing nuclear energy’s climate change credentials: a recent report by a bipartisan state legislative caucus on nuclear energy found that Pennsylvania’s nuclear plants produce more than 93% of the state’s emission-free energy, and prevent the release of more than 37 million metric tons of carbon emissions annually.

That kind of argument has helped nuclear power companies get public subsidies in states like Illinois, New York and New Jersey, at a time when nuclear has been struggling to compete in the private market against cheap natural gas.

Ahmed Abdulla is an assistant research scientist at the Center for Energy Research at UC San Diego, where he models how we will transition to a low-carbon future.

“All the evidence suggests that the existing renewable technologies are not sufficient to make up for nuclear’s loss if you are talking about the sort of deep decarbonization we need,” Abdulla said.

But some environmental groups that oppose nuclear power say these subsidies are a waste of taxpayers’ money.

Judson points out that although nuclear power plants do not emit carbon, they do create nuclear waste, a byproduct that can be radioactive for hundreds of thousands of years.

“There’s a lot of different ways to poison the environment [other] than by burning fossil fuels,” Judson said.