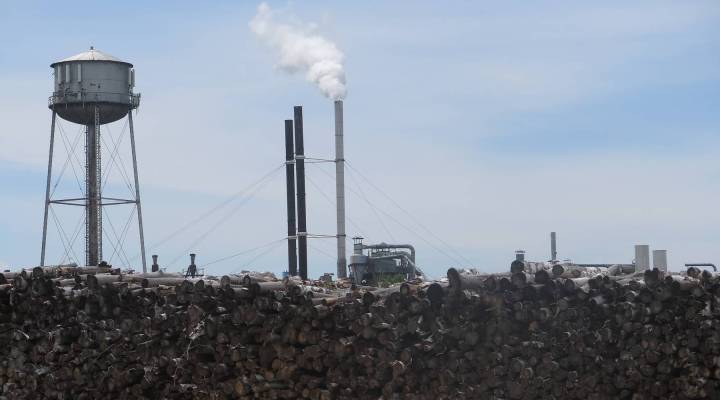 COPY
Smokestacks at the Diamond match factory in Cloquet tower over a pile of wood.  Dan Kraker for Marketplace
Way of life

Smokestacks at the Diamond match factory in Cloquet tower over a pile of wood.  Dan Kraker for Marketplace
Listen Now

The history of the wood and timber industry in Cloquet, Minn., runs deep. Just ask Marshall Johnson, the 72-year-old mayor of Scanlon, a tiny town right next to Cloquet. He worked in the industry for 47 years.

For more than a century, the paper mill, the matchstick plant, and a third factory that makes ceiling tiles have provided hundreds of well paid  jobs in this small city of 12,000 people, just 20 miles west of Duluth.

That history and community are why it was such a big blow to Cloquet when the news came that the match factory is closing. The Diamond Match brand was recently sold by its owner, Newell Brands. The new owner, Royal Oak Enterprises, didn’t want the Cloquet factory, so 85 employees will lose their jobs.

Steve Petoletti, president of the United Steelworkers Local 970 in Cloquet, said “there’s a lot of concern, a lot of emotion” among workers at the Diamond match factory in Cloquet, which will close later this summer.

“There’s a lot of concern, a lot of emotion,” said Steve Petoletti, president of the United Steelworkers Local 970 union. After initially being told the plant would remain open four to six months, Petoletti said the union has received official word the plant will now close between July 28 and August 11.

“And as the days get closer,” he said, “you can feel a little more emotion.”

Over the past ten years, jobs in wood product manufacturing in Minnesota have dropped by more than 30 percent. Paper mill jobs have been cut by more than 20 percent.

Cloquet once had a thriving wood industry, thanks to the St. Louis River. In the late 1800s, giant white pines were cut in the heart of northern Minnesota’s timber lands, and floated downstream to Cloquet.

“And this would be the logical place for the logs to come floating down the river, and for people to build sawmills, so that’s really how the city of Cloquet got started,” said Rachael Martin, executive director of the Carlton County historical society, who  put together an exhibit called “Wood City Smokestacks” a couple of years ago.

“One of the striking things about Cloquet,” she said, is “you can see these huge smokestacks, especially in the wintertime, when it’s so cold, plumes of this white water vapor, outlining itself on the bright blue skies.”

But the industry’s impact on Cloquet is greater than it’s skyline, or in the wages and taxes it pays, said Johnson.

In the 1950s, mill workers could opt to have money deducted from their paychecks to help build a new hospital, he said. In return, labor and management had seats on the hospital board.

But despite the sadness over the closing of the Diamond Match factory, there’s still optimism in Cloquet.

Across the street from the match factory, a steady stream of trucks haul logs to the Sappi mill, the largest paper mill in the state.

But the plant doesn’t just make paper anymore. Four years ago the South African company converted its Cloquet mill to also be able to make a product called specialized cellulose, that’s used in everything from textiles like rayon, to grated cheese, even cell phone screens.

“That was about a $170, $180 investment,” said mill managing director Mike Schultz. “You don’t see investments like that in our industry, particularly in North America very much anymore.”

But with the paper market in decline, Schultz said Sappi realized it needed to diversify. The mill is also entering new markets in the paper industry, making higher end packaging paper, gift cards, even hotel keys.

That diversification gives Schultz confidence the mill can continue to thrive in Cloquet. But Sappi, too, has had to shed jobs. “I’ll give you a point of reference,” he said. “In 2002, when Sappi acquired the mill, we had about 1,050 employees. And today we’re at about 685. If anything I feel like we are a little too lean here, but it really does come down to being competitive.”

The other major wood products company in Cloquet is United States Gypsum, or USG, which makes ceiling tiles. That factory has also cut jobs over the years, but still employs more than 300 people.

Holly Hansen, the community development director for Cloquet, wants to retain those jobs and Cloquet’s industrial legacy, she said. And, hopefully, lure a new company into the match factory.

“I do know that some wood product industry companies are touring it,” she said. “I think the question is, does it fit their needs?”