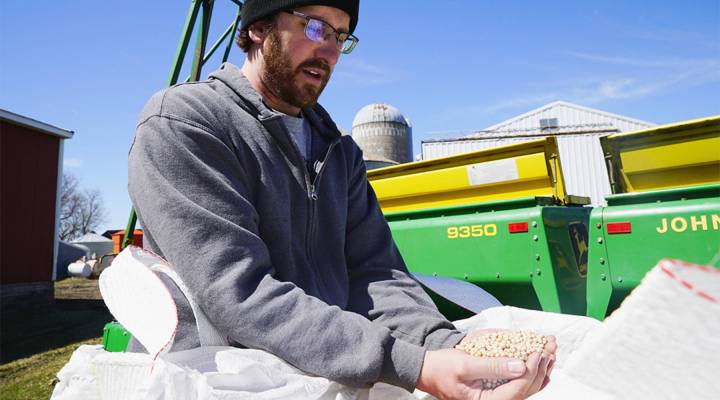 COPY
Ryan Klassen inspects pea seeds on his farm in Belgrade, Minnesota. Those peas are the base of the protein being used in a range of products, including energy bars, cereals and milks. Renata Sago/Marketplace

Ryan Klassen inspects pea seeds on his farm in Belgrade, Minnesota. Those peas are the base of the protein being used in a range of products, including energy bars, cereals and milks. Renata Sago/Marketplace
Listen Now

Chuck Showalter walked through the Mississippi Market Co-op in St. Paul, Minnesota, one recent morning, past a colorful display of fresh organic produce, artisan cheeses and essential oils. The longtime buyer for this popular natural foods store, located a couple of miles from the Mississippi River, was demonstrating that a lot of its products contain peas.

“This is kind of our alternative pasta aisle, here,” he said, pointing to some shelves stocked with boxes of quinoa-based elbow macaroni and brown rice penne. “Typically here,” he said, eyeing an empty space. “This pasta is pea-flour based, and it’s out of stock because it’s sold so well.”

He walked through the store’s dairy section, which was stocked with bottles of Ripple, a drink branded as “nutritious pea milk.” Then it was on to the pet food section, where Showalter read off the ingredients on a bag of Halo Natural Cat Food.

“Chicken liver, dried egg product and then dried peas,” he said. “You’re going to find that as a protein supplement.”

Demand for pea protein has grown at this Mississippi Market Co-op and its two other locations in St. Paul. It is also rising globally. Some analysts predict the pea protein market will at least triple in size to more than $300 million by 2025. Behind the trend is consumers’ desire to eat more plant-based foods. A 2018 survey from the research firm Nielsen found 39% of Americans are actively trying to eat more plant-based foods as a substitute for beef, chicken and pork. Yellow and green peas offer a strong alternative, with their chewy, meat-like texture.

The main ingredient in the Beyond Burger from Beyond Meat, which is expected to debut on the stock market Thursday, is pea protein.

The growth of the pea protein market is encouraging for farmers like Ryan Klassen. His family has been planting peas for more than 10 years on a 2-square-mile farm in Belgrade, Minnesota, about two hours northwest of St. Paul. Last week, Klassen had one of his largest shipments ever — 48,000 pounds of yellow field pea seeds — stacked up in a shed, awaiting the soil to dry out to be planted.

Klassen goes through one of the bags of pea seeds that he’s preparing to plant. He plans to harvest the peas this summer.

“What peas do for the soil is invaluable,” he said, running his hands through a ginormous bag of seeds. “It’s a guaranteed 5 to 10% yield bump for whatever crop comes following peas, based on the nitrogen credit that they leave behind.”

Klassen buys his seeds from Minnesota-based Puris, the largest pea protein producer in the United States. Once he gets them in the ground, they’ll grow quickly. Within a week, sprouts should emerge, and within two weeks, his fields will be green. But the unpredictability of the Minnesota climate is his biggest obstacle for growing peas, and, according to agriculture analysts, one thing that could slow down the development of a reliable supply chain.

“I would like to say that I go home and watch TV, but I actually go home and watch the Weather Channel,” said Klassen, who expects to be able to harvest by late June or July. He’ll sell his crop back to Puris for processing.

Agribusiness conglomerate Cargill is an investor in Puris. Together, they’re developing new products with pea protein, including dairy.

“We tried an ice cream, so just a vanilla ice cream —  really smooth texture,” said Matthew Jacobs, who manages Cargill’s plant-based protein business. “We had a cheese sauce. We had a smoothie.” The pea, he added, could one day rival soybeans as a main source of plant protein because it is so versatile.

“The fact that it can be used well across a really wide range of very mainstream food and beverages is important,” said Jacobs. He noted it is free of lactose, gluten and other allergens.

But the pea protein market is still pretty small compared to soybeans, even though soybean production has been declining. Still, agribusiness giants are now opening new pea processing plants to meet rising pea demand. They’re also working to further develop other plant-based proteins, like from oats and canola.