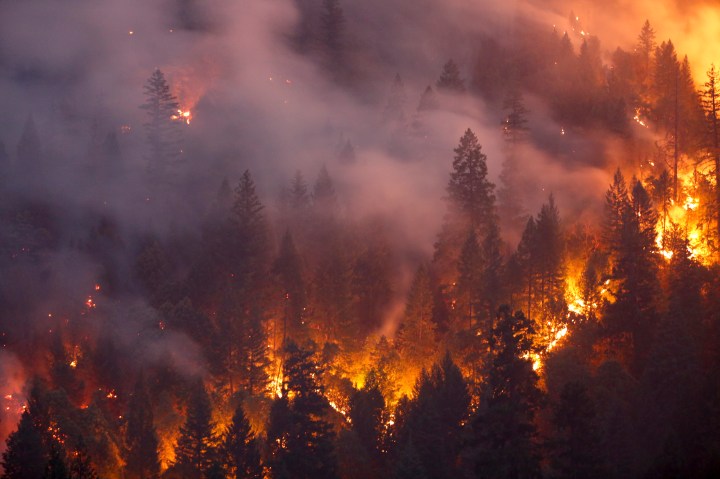 COPY
Prescribed burns are used to prevent large fires, but an incident in New Mexico is leading to some reconsideration about the practice. Terray Sylvester/Getty Images
A Warmer World

Prescribed burns are used to prevent large fires, but an incident in New Mexico is leading to some reconsideration about the practice. Terray Sylvester/Getty Images
Listen Now

Wildfire season started early in the Southwest. In New Mexico, the Calf Canyon and Hermits Peak fires that have been burning since mid-April have merged to become the largest in the state’s history. And those fires were started as prescribed burns by the United States Forest Service, meant to reduce fuel and prevent extreme fires later.

The Forest Service is investigating why the burns got out of control. We do know that April conditions in the Sangre de Cristo Mountains were unusually dry and windy.

“I would never have guessed that a fire at this time of year and at this elevation would burn like this,” said James Biggs, a fire ecologist at New Mexico Highland University, adding that prescribed burns almost never get out of control.

Still, this incident could have a chilling effect, according to Kimiko Barrett with Headwaters Economics.

“I think it’s natural to feel skeptical after this experience,” she said, particularly as suppression and recovery costs mount. But Barrett also said abandoning this wildfire mitigation tool would be even more destructive and expensive.

“Because wildfire is an ecological necessity. It’s inevitable,” she said.

It’s time to update burn protocols to account for climate change, said Biggs, “so we can avoid this situation particularly.”

Because of the New Mexico fire, the Forest Service has paused prescribed burning until late summer.