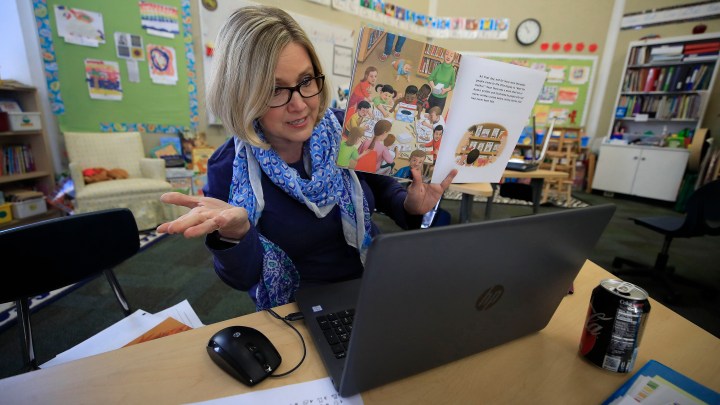 COPY
A Kentucky elementary school teacher leading an online class. Among the most vulnerable government workers are those in education and health care. Andy Lyons/Getty Images
COVID & Unemployment

A Kentucky elementary school teacher leading an online class. Among the most vulnerable government workers are those in education and health care. Andy Lyons/Getty Images
Listen Now

The economy added 1.4 million jobs in August according to the latest numbers from the U.S. Bureau of Labor Statistics. The unemployment rate also fell below 10% for the first time since the pandemic took hold, but job growth has slowed since June, and the job gains are partly due to the temporary hiring of 238,000 people working on the 2020 census.

State and local government workers across the country are losing their jobs as states struggle to bring in revenue during the pandemic. In Texas, overall revenue collections are down more than 3%. And for many Texans, that could mean more job cuts.

Texas leaders have already asked some departments to trim their budgets.

“And that is generally public education, higher education,” said Cal Jillson, professor of political science at SMU in Dallas. He said unlike the federal government, which can run extensive deficits, states are required to balance their budgets.

“So what that means is when your revenues go down, you have to cut almost immediately, and the result of that is a loss of jobs,” Jillson said.

Nationwide, more than a million state and local workers have been furloughed or laid off, according to Michael Leachman at the Center on Budget and Policy Priorities.

“And there are going to be more if the federal government doesn’t step up to the plate and provide substantial fiscal aid,” he said.

And as in Texas, he said those most vulnerable to job cuts nationwide include teachers and health care workers.