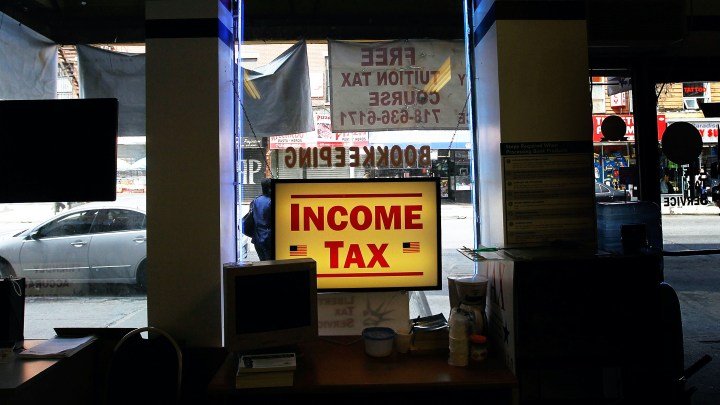 The pandemic relief bill passed by the House includes $350 billion in aid to state and local governments. Many of those governments have been taking in less revenue from income and sales taxes ever since the pandemic closed businesses and schools, and millions lost their jobs, one year ago.

According to the most recent report from the Urban-Brookings Tax Policy Center, state revenue overall was down by 1.9% from April to December of 2020 compared to the same period in the previous year.

However, in 22 states, tax revenue actually increased, with revenue in four states — Idaho, Utah, South Dakota and Colorado — up more than 5%. Revenue fell in the remaining states, with seven down more than 10% —Texas, Oregon, Florida, Nevada, North Dakota, Hawaii and Alaska.

This disparity has a lot to do with the mix of jobs and layoffs in a state, said Carl Davis, research director at the Institute on Taxation and Economic Policy.

Revenue has generally fallen significantly in states with a lot of low-wage tourism jobs — in hotels, bars and restaurants — as well as states that are heavily dependent on oil and gas production, since energy prices have plummeted during the pandemic.

But states with more jobs that can be done from home at higher wages, such as those in high-tech and professional services, are generally faring better.

Washington state is one example, with revenue up approximately 3%, according to the Tax Policy Center. That’s thanks in part to people like Darby Meegan of Spokane. He’s a manager for a tech startup, his wife is an accountant for an architecture firm and they’ve both been working remotely from home.

“We’ve maintained our salaries, and that’s been a huge blessing. We haven’t had to take a step back from hours or anything like that,” Meegan said. “With the stimulus checks, that was a nice, little bonus.”

The couple owns a home that has gone up in value, so they’re paying more property tax. But they have been able to improve their overall balance sheet.

“We’ve been able to save significantly more, right? We’re not eating out as much,” Meegan said. And they made one big purchase during the pandemic — a new van. “It got built into an RV. So we’ve sort of taken some of our vacation money that we budget and instead made a domestic vacation-mobile.”

Not every high earner has come through the pandemic recession unscathed, said Fiona Greig, co-president of the JPMorgan Chase Institute. Greig’s team has been tracking household checking-account balances by income demographics during the pandemic.

But more upper-income households have seen their bank balances and assets grow. Greig said one reason is the booming stock market. “The broader trend of the growth in wealth — we see a lot of families transferring money into brokerage accounts to take advantage of those gains.”

But some states are missing out on taxing those income gains at the top to the full extent possible, said Davis at ITEP.

He pointed to Nevada — heavily dependent on tourism dollars — with revenue down about 12%. That state has “no broad-based income tax,” Davis said. “So you’re leaning a lot on sales taxes, regressive taxes in general, and your revenues aren’t going to do quite as well as progressive taxes, at a time like this of soaring income inequality.”

Davis said let’s contrast that with California, “a state that has opted for a more progressive mix, leaning a bit more on the income tax than most states do, with higher top income tax rates on top earners especially. That’s a state faring a whole lot better,” with revenue up around 2% since the pandemic started.

California’s fiscal situation has been helped a good bit by the soaring fortunes of Silicon Valley, which attracted Alok Watve and his family to the area from Texas.

“I’m a software engineer,” Watve said. “I was in Austin for about 4½ years. And then during the pandemic my wife found a full-time opportunity in the Bay Area, so we moved.”

Watve said Silicon Valley employers are hiring “like there’s no tomorrow. There were plenty of opportunities. In fact, there were two offers in my hands.”

Davis said some states are now considering hiking taxes on top earners, to boost revenue and fund recovery from the pandemic — including New York, Minnesota, Connecticut, Rhode Island and California.