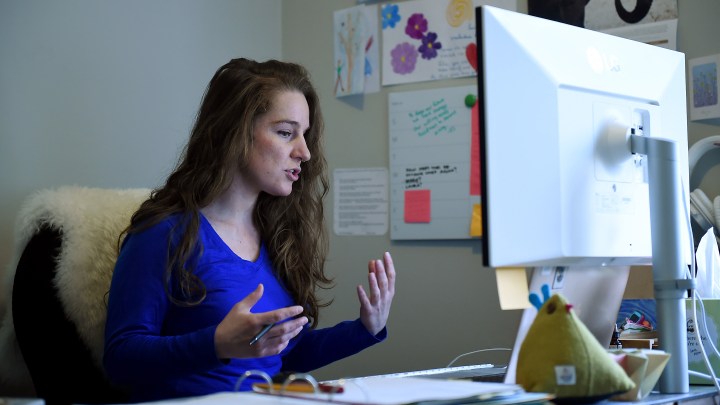 COPY
A teacher works in her home office in Virginia. Some workers have stopped commuting across state borders, provoking skirmishes over tax revenue. Olivier Douliery/AFP via Getty Images
Workplace Culture

A teacher works in her home office in Virginia. Some workers have stopped commuting across state borders, provoking skirmishes over tax revenue. Olivier Douliery/AFP via Getty Images
Listen Now

Some states are looking for more tax revenue by battling with other states over which of them can charge income taxes for hundreds of thousands of workers who used to cross state lines to go to an office, but don’t anymore.

That group includes Dave Miranowski. Before the pandemic, he commuted by bike and ferry between his New Jersey home and an architecture firm in Manhattan.

“It feels like a separate place in Jersey City, but I can get into my office quite quickly,” he said.

Despite the easy commute, crossing state lines means he has to file taxes in both places. New York is one of seven states that tax workers based on the physical locations of their employers.

New Jersey normally refunds the more than $1 billion in income taxes paid by residents like Miranowski, who have to pay taxes to New York. But this year is different.

“I think it was March 15 when my office closed,” he said. “I’ve been working from home exclusively since then.”

New Jersey and about a dozen states are bringing the legal question to the Supreme Court to try to stop states from taxing workers who never set foot in the office.

“This becomes a serious problem if remote work becomes a long-term phenomenon, as it probably will,” said Jared Walczak, director of state tax policy at the Tax Foundation.

While states have had reciprocity agreements or provided refunds to avoid double-taxing workers, Walczak said remote work could change that.

“If your home state decides that you truly are both living and working in their state, then they might still tax you.”

Especially as states struggle to make up for a drop in other tax revenue due to the pandemic.

“Clearly, there’s some pain on things like parking tolls and gas taxes,” said Louise Sheiner, a senior fellow at the Brookings Institution and policy director for the Hutchins Center on Fiscal and Monetary Policy.

Concurrent drops in tourism and sales taxes have pushed state revenue down an average of 5%, according to Sheiner.

She said most states aren’t in the dire straits that many expected earlier in the year, and income taxes on remote workers likely make up only a tiny share of state budgets.

But, she said, long-term alterations to state tax policies for remote work could affect job hubs like New York and Boston, and their local economies, well into the future.