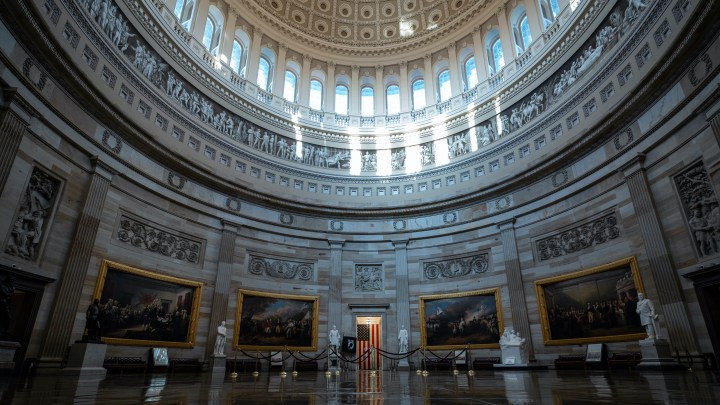 The $1.9 trillion COVID-19 relief package that the White House and congressional Democrats are now running down the legislative field includes $350 billion in direct aid to state, county, municipal and tribal governments. It’s meant to help them offset losses in tax revenue brought on by pandemic shutdowns, job losses and depressed spending by businesses and households.

Is it too much? Not enough? Just right? And what’s the best way to spend it?

Some state governments, like California’s, are doing pretty well. Meanwhile, states heavily dependent on tourism or energy — think Hawaii, Florida, Texas — are deep in the hole.

Lucy Dadayan at the Urban-Brookings Tax Policy Center estimates state revenues are down 1.8% overall during the pandemic:

In part because 1.3 million state and local workers have been laid off as a result.

Dadayan thinks $350 billion in federal aid is enough to get governments back on their feet and some of those people rehired.

“There is a strong argument for doing more than nothing. I think that $350 billion is too much,” he said.

Strain argues the amount should be based on the revenue governments have lost, which he estimates at $130 billion.

“Under that formula, some states may not get any money. But some of the states that have really been hit by the pandemic — that’s where I think you want the federal government to step in and help,” Strain said.

Federal aid should be narrowly targeted, according to Jared Walczak at the Tax Foundation. For instance, to refill state unemployment trust funds: “Make sure they can keep making those payments without too much further debt. And also keep the taxes on employers lower because in some states, they’re going to skyrocket.”

Walczak said those unemployment taxes could rise sevenfold to tenfold later this year without a federal bailout.