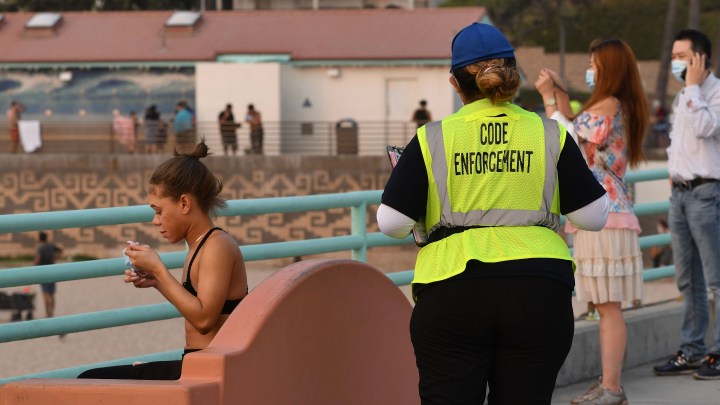 COPY
A city employee reminds a woman to wear her face mask on Sept. 7, 2020 in Manhattan Beach, California, amid the coronavirus pandemic. Chris Delmas/AFP via Getty Images
COVID & Unemployment

A city employee reminds a woman to wear her face mask on Sept. 7, 2020 in Manhattan Beach, California, amid the coronavirus pandemic. Chris Delmas/AFP via Getty Images
Listen Now

Of the $1.9 trillion in COVID relief that President Joe Biden and congressional Democrats are proposing, $350 billion is slated for state and local governments.

That’s to help them make up for lost tax revenue, beef up services for those in need and get state and local government employees back to work.

More than a million of them have been furloughed or laid off and still aren’t back on the payroll.

Lavonne Pledger, 34, is a single dad with two teenagers living in Norfolk, Virginia. In March, the city closed the rec center where he ran youth programs.

“Up until June we were working virtually. And then I was furloughed,” Pledger said, with no pay or benefits.

Then in December, he and more than 50 other city employees got laid of permanently.

“I have not been doing super-great,” Pledger said. “I live in public housing. I got promoted to my full-time position and I was in the process of purchasing a home as a homeowner and having that kind of equity. Clearly that fell through.”

Pledger has a lot of company, said Lee Saunders, president of the American Federation of State, County and Municipal Employees.

“We have lost over 1.3 million public service jobs,” Saunders said. “And a high percentage are people of color and women.”

Those layoffs work out to about 1 in 6 state and local government workers before the pandemic, said Michael Leachman at the Center for Budget and Policy Priorities.

And part of the reason governments are cutting jobs is the same as it was then, Leachman said: falling tax revenues because businesses have closed and fewer people have been working.

“As schools and colleges and universities go back to normal operations, those employees will be needed to be hired again,” Leachman said.

But without hundreds of billions in new federal aid, state and local governments won’t have the money to do that, said Julia Wolfe at the Economic Policy Institute.

“Many of them will be tempted to pursue austerity — the same mistake that they made last time around, in the Great Recession,” Wolfe said, after which it took years to restore public sector employment.