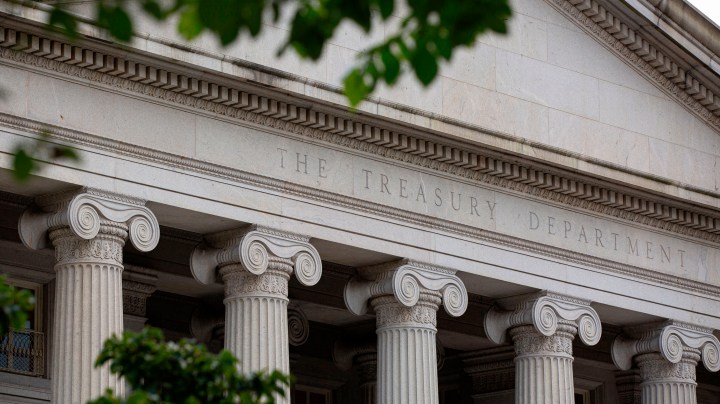 COPY
The U.S. Treasury was widely criticized for how it distributed COVID relief funds to tribal governments. Alastair Pike/AFP via Getty Images
COVID-19

The U.S. Treasury was widely criticized for how it distributed COVID relief funds to tribal governments. Alastair Pike/AFP via Getty Images
Listen Now

Between last year’s CARES Act and the more recent American Rescue Plan, the federal government has distributed close to $30 billion to tribal governments during the pandemic.

The rollout of those funds has not gone smoothly. As Marketplace has previously reported, some tribes were initially left out of funding opportunities and allocation formulas favored the most economically prosperous tribes, rather than those in need of the most help.

This week, researchers at Harvard proposed some solutions.

In the early days of the pandemic, it wasn’t a given that tribal governments would get any federal aid. “You know, this is a really unique and historic investment,” said Kevin Killer, president of the Oglala Sioux Tribe.

Killer said that funding has come with challenges, like tight deadlines and allocation that didn’t account for geographic or economic differences between tribes.

“So how do you resolve it? You get more Native people closer to the ground who can understand some of the complexities,” he said.

Researchers with The Harvard Project on American Indian Economic Development agree. In the policy paper released this week, they call on the Treasury Department to create a dedicated tribal affairs office.

“You need to develop relationships to know how to react to the bumps in the road that really arise,” said Eric Henson, who co-authored the paper.

The Treasury Department hadn’t built those relationships with tribes when Congress charged it with distributing the pandemic aid, Henson said, “and suddenly made them a major player in an arena that they hadn’t really worked in before.”

That inexperience led to major missteps, according to Twyla Baker, president of Nueta Hidatsa Sahnish College in North Dakota and an expert on tribal governance, pointing to allocation formulas that favored the richest tribes.

“We just have to do a better job of serving the people who need it,” she said.

Baker supports another of the paper’s recommendations: that the federal government target the poorest tribes with future aid. “One of the really awful things is the fact that a huge proportion of the population is no longer here to benefit from this,” Baker said.

A lack of past federal investment in things like healthcare and housing contributed to the high pandemic death toll in tribal communities, she added.

Clarification (Nov. 5, 2021): The text of this story has been updated to reflect that $30 billion has been distributed to tribal governments, specifically.