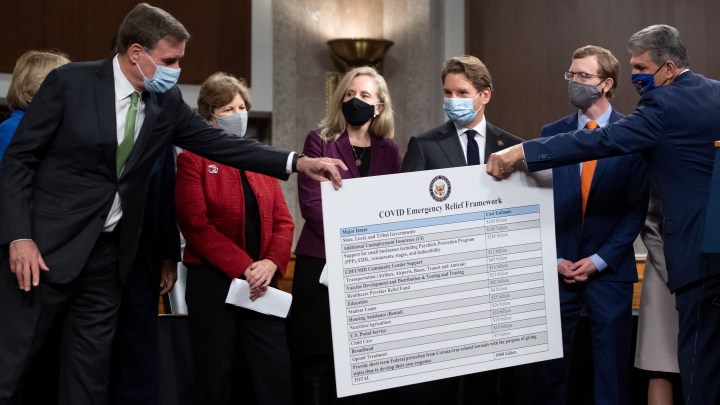 COPY
Sen. Joe Manchin, Democrat of West Virginia, hands a poster describing a proposal for a COVID-19 relief bill to Sen. Mark Warner, Democrat of Virginia, alongside a bipartisan group of Democrat and Republican members of Congress as they announce the proposal on Dec. 1, 2020. Saul Loeb/AFP via Getty Images
COVID-19

Sen. Joe Manchin, Democrat of West Virginia, hands a poster describing a proposal for a COVID-19 relief bill to Sen. Mark Warner, Democrat of Virginia, alongside a bipartisan group of Democrat and Republican members of Congress as they announce the proposal on Dec. 1, 2020. Saul Loeb/AFP via Getty Images
Listen Now

Senate Republicans are willing to spend around $500 billion on coronavirus relief; House Democrats prefer $2 trillion; a bipartisan group of senators has proposed spending $900 billion. Each has a different recipe for relief.

We asked a few economists what line items ought to go into any relief package.

Everyone seems to agree on fighting the virus.

“We need to make sure we have enough funding to deal with public health measures to combat the virus,” said Michael Strain, a labor economist with the American Enterprise Institute. Funding for public health and vaccination is in all the proposals on the table — Democratic, Republican, bipartisan.

Extended unemployment benefits, which expire at the end of the December, were top of mind for Vincent Deluard, macrostrategist for financial services group StoneX.

“The single biggest item down the list is unemployment benefits, because this is something where people are gonna really suffer,” he said.

Senate Republicans plan would extend some unemployment aid for a month. Democrats haven’t released details, but previous plans wanted to extend for longer. The bipartisan plan would shell out an extra $300 in unemployment per week for four months.

Constance Hunter, chief economist at KPMG, has got the business angle. “There should be grants to businesses, not loans. There are many businesses that really need fiscal assistance, or they’re not gonna be there when we start having the vaccine widely distributed,” she said.

Grants should also go to people, said Justin Wolfers, professor of economics at the University of Michigan.

“Unlike previous recessions, we should really design the package around income support for the millions of people who are either without work or on incredibly reduced hours,” he said.

The Republican and bipartisan plans don’t include stimulus checks and don’t appear to say anything about grants to businesses, but they would add $300 billion to the Paycheck Protection Program. Democrats have been favorable to more stimulus checks in the past. Wolfers and Democrats also want money for state and local governments, something which Chris Edwards, economist at the CATO Institute, does not want.

Aid to state and local governments is and has been a point of contention between Democrats and Republicans, as has the size of any coronavirus relief package. So far, the compromise everyone has made has been to do nothing. Only in Washington is that a compromise.