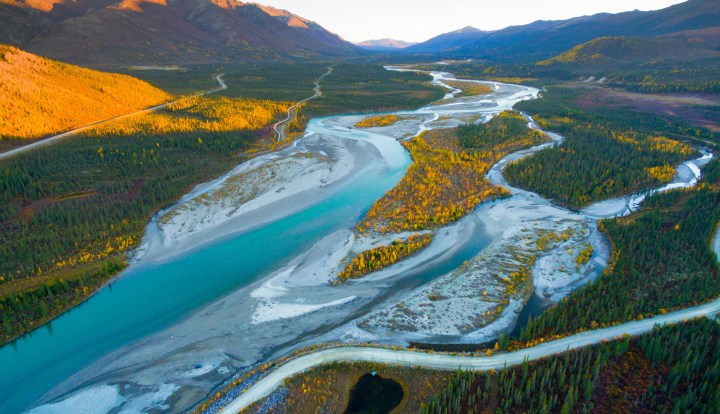 A landscape view of Alaska, which is one of only two states that has neither a sales tax nor an income tax. mantaphoto/Getty Images
I've Always Wondered ...

A landscape view of Alaska, which is one of only two states that has neither a sales tax nor an income tax. mantaphoto/Getty Images

How do states without sales tax or income tax pay for government services?

When it comes to the local and state tax system, there’s an analogy experts like to use — it should work like a three-legged stool.

What that means is that a balanced tax portfolio should have an income tax, a sales tax and a property tax, explained Mehmet Tosun, professor of economics at the University of Nevada, Reno.

But America has 10 two-legged stools — states without either a sales tax or an income tax. States that have forgone sales taxes include Delaware, Montana and Oregon, while Nevada, South Dakota, Washington and Florida have foregone income taxes.

Alaska and New Hampshire are the only states with neither a comprehensive sales tax nor an income tax.

Tosun said that lacking both makes it “extremely hard” to raise revenues, so to pay for government services, these two states have to compensate with higher property taxes or pull in revenue through alternative sources.

While Alaska and New Hampshire both lack either of these taxes, there are some caveats. New Hampshire does technically charge an income tax on investment earnings at a rate of 5%, but not wages. And Tosun noted some local areas in Alaska have a sales tax, it’s just not in place throughout the state.

Alaska currently imposes a 35% tax rate on oil and gas produced in the region. Fluctuating oil prices will affect how much the state can reap from this commodity. Since 1977, revenues from the industry have made up 80% of the state’s general fund, on average, according to the Alaska Oil & Gas Association.

On top of that, Tosun pointed out the state does have an extremely low population of around 730,000.

With rising oil prices, the Alaska Department of Revenue recently increased projections of state revenues this year to $6 billion — up from $4.7 billion, according to Anchorage Daily News.

But the problem with relying on natural resources is that they’re finite.

“It’s very short sighted to set your revenue system up so it’s dependent on a revenue source that is depleting and also is hurting the climate,” said Michael Leachman, vice president for state fiscal policy at the Center on Budget and Policy Priorities.

He explained that Alaska repealed its income tax in the 1980s after opening up its oil pipeline system.

As a result, Leachman said that Alaska’s revenues are very volatile. In fact, it’s actually earned the unwanted superlative of having the most volatile tax revenue in the U.S.

“It just makes it very hard to run a school system and invest in people’s health and in communities and families,” Leachman said.

While the state faces an upswing right now, Alaska’s tax revenue was down 45% during the height of the COVID-19 crisis compared to the previous year because of oil price and production downturns, according to a National Public Radio analysis.

Over the past decade, key moments when prices plunged also include 2014–2016 and 2018. The money the state raked in from the oil and gas industry in fiscal year 2019 only made up 38% of its general fund revenue, which amounted to $3.1 billion, according to the AOGA.

“They also rely heavily on local governments to deliver services, and so property taxes paid at the local level are more prominent than in other states,” Leachman said.

Residents in the state pay the country’s third-highest property tax at a rate of about 2.2% — just behind Illinois and New Jersey, according to a WalletHub study from earlier this year.

The Concord Monitor reported that even though New Hampshire has one of the best low student-to-teacher ratios, it’s ranked last for public-education state funding. Districts with lower-than-average property values have greater difficulty raising funds to provide an adequate education, said the National Education Association-New Hampshire.

Even states without just one type of tax can face hurdles. Tosun said that in Nevada, where he’s based, the state makes up for missing income taxes through the gaming economy. However, he said the state experiences fluctuating revenues because this industry — overcrowded with competition —  isn’t pulling in as much money as it used to.

States such as West Virginia and Mississippi have attempted to repeal income taxes, one of the stool’s legs, as recently as this year.

Leachman said the argument in favor of getting rid of taxes comes down to the belief that people and business will flock to your region, but the evidence hasn’t borne that out.

“There are lots of states that have tried sizable income tax cuts in hopes of creating economic growth and it hasn’t panned out the way they had hoped,” he said.